Photos and Words by Billy Rainford

It seems like he’s been a Pro racer forever and yet it also feels like it went by in a flash. Time is funny like that.

Congratulations on a Hall of Fame career, Colton.

Let’s have a look at how I saw the racing at Round 8 of the Rockstar Energy Triple Crown MX Nationals at Walton Raceway.

There’s got to be some weird pressure when you’re expected to win. If you win, it’s like no big deal, but if you don’t, people wonder what’s wrong. Very few people get to feel this unique pressure, but I’m sure it’s how Phil feels up here in Canada.

Walton is where most of us first saw him way back in 2007. This past Saturday, he finished 3-1 and swapped places with Cole Thompson. He was in it at or near the front of both motos and the racing was exciting.

He’ll finish 3rd in the MX season and leads the Triple Crown chase for the $100K by 25 points over Thompson. They’re both very good indoors, so this should be an intense 3-round series!

Cole killed everyone in the first moto. Like always, with his smooth style he didn’t even look like he was trying and yet kept yarding everyone!

His 3rd place in moto 2 tied him for the overall.

He really worked hard to take the MX title but injuries held him back in the latter part of the series.

This SX series is going to be fun to watch!

Colton’s 2-2 placed him just 1 point behind Phil and Cole. He looked like he could have turned it on and gone for wins, but I’m sure the bigger prize kept popping into his head — clinching his 6th 450 MX title!

It feels a little surreal to say this, but we just watched Colton’s last Pro race at Walton. Congratulations to Colton and his entire Honda Canada GDR Fox Racing Canada team.

Mike showed early speed with the other top guys, but just didn’t seem to have the pace this week to challenge for the wins.

He grabbed the 2nd moto holeshot and looked good, but it was only good enough for a 4-4 overall.

He took 2nd in the championship, so he can’t be too disappointed.

This was a great way to end the season for Keylan. He’s always been the guy just behind the top 5 or 6 guys, but this week he looked really good and ran pretty close to the top riders.

He grabbed the first moto holeshot so we got some quality Keylan mic time.

Chase is a good dude and really wants to be battling at the front. He’s been a great addition to the series and keeps improving.

He had a great start in moto 2 and got to see what they’re doing up at the front.

He had a nice battle with Josh Cartwright, too.

Even Josh’s finishes equal Liam O’Farrell‘s number — 6-8! These guys were glued together from the very start of the TransCan.

Josh is another rider who wants to bridge the gap to the top few riders, and he’s close to doing that.

His 6-8 finishes were right where you’d expect him to be. With 5 riders seemingly so close in speed — Josh, Marquier, Meston, O’Farrell, and #12 Cade Clason — it’s always fun to watch who tops this group each week.

Cade’s wife, Sarah, was getting some day surgery done back home in Arizona, so his mind had to have been wandering.

Cade’s 9-9 isn’t where he wants to be but it was fun to watch him try to get around Club MX owner, #290 Brandon Haas, for a while in moto 2 (Cade lived there for quite a while).

Cade loves the indoor stuff and we’re hearing some cool rumours about his winter season, so watch for that.

2 bad starts left Ryan chasing from the back, and that’s why I didn’t really notice him until he made an appearance in the top 10 in moto 1.

Moto 2’s start was even worse and he had to fight his way up to 11th by the flag.

He’s really happy to have chased his first full Pro series, so congratulations on that. He ended up a very solid 7th in the series, just 3 points behind Meston.

He just finished his rookie Pro MX season and did it in the 450 class. To finish with a top 10 number should be very rewarding for him and his team.

He also sat in on our live nightly show twice, so it’s great to see a young rider who understands the importance of getting out there.

If I don’t choose Colton for this, I feel like there’d be some sort of riot in the streets! Of course I’m giving Colton Stud Status…for this week and the rest of his life!

I was one of those people who didn’t see his potential way back in the Richmond Kawasaki days. He sure made a lot of us look dumb.

Remember, I’m talking about the situation, not the rider! Matt Goerke‘s crash in turn 1 of moto 1 that knocked both him and Tony Alessi out definitely gets Dud Status for this 450 round.

I hope Matt is healing up and that we see him sooner rather than later.

We knew Shawn Maffenbeier was likely going to be at the final round, but would he really be able to race less than 4 weeks after breaking his collarbone while practicing?

Thank you very much for reading. It was a very entertaining day and summer of racing. It had a little bit of everything, and I’m pretty sorry it’s over so soon!

Next stop is the Montreal Supercross on Saturday, September 14th. Well, for me it’s Crawfordsville, Indiana, this Saturday, but… 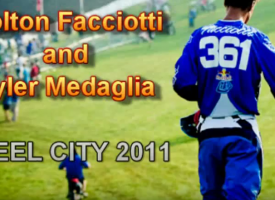