Welcome to Week #33 of the DMX Frid’Eh Update Presented by Yamaha Canada. This week belongs to BC ripper Jonah Brittons.

Jonah has been making improvements the past few years and is on the brink competing pretty high up in the standings.

Unfortunately, he sustained an injury and decided to skip this season to get ready for 2020 (We ask him about that).

We’re going to be pretty quick this week as I’m (Billy) currently at the Walton TransCan GNC and it has been non-stop action the entire time.

I was able to get enough time to get an introduction interview done with Jonah, so that will be the extent of my input this week.

Here’s what’s up with Jonah:

Direct Motocross: Hello, Jonah. We haven’t seen you for a while. You took the whole summer off from racing up in Canada? How come?

Jonah Brittons: Hey, Billy. Yes, it’s definitely been a minute since I’ve last seen you, hope all is well. You see, shortly before the season began I was out having some fun on the bike, keeping the joy in it, when I came up a bit short on a step-up which sent me over the bars into the face of the following step down causing me to injure my left hand/wrist. I decided, instead of rushing back to things and going into the season at 80%, I would invest my time and finances into getting back to 110% as that’s what it takes for a privateer to make it, as you very well know.

Oh ok. Well, let’s talk about the injury for a second. How was the rehab and are you 100% now?

The rehab went well. I did all of it on my own, mostly icing it before I could start using weights again. I did try riding after a few weeks but my hand wasn’t having it. it’s the name of the game I suppose.

Now, yeah, I would say my hand/wrist is back to full health. Gives me troubles sometimes but mostly stiffness, but hey, that’s what the yoga’s for. Am I right?!

So you’re down in California. When did you get there and how long are you staying?

Yes, I’ve been staying in Temecula, California, since the beginning of April. I’ve come back a couple times for personal reasons but only for short periods of time, as I didn’t have a bike to ride whilst back in country.

To be honest, I’m not entirely sure how long I’m staying. I’ve got to be back in Canada by the beginning of October as my tourist visa will expire. I’m looking into other options to stay down here so I can start training Supercross.

I know you were training with Ryan Hughes (and you just mentioned yoga…). Is that what you’re doing now? What’s he like as a coach?

Yes, I’ve been training off and on with Ryan now for about 4-5 years. This year has been a bit less do to both our busy schedules. To be honest with you, I’ve found what works best for me is not having him there at the track watching me all the time. It’s good for a rider to do things on his own, it builds mental toughness, because when your out in a race, in the end, your alone with your own mind. Which is usually a riders best/worst enemy.

Ryan as a trainer is awesome, he tells you how it is and doesn’t waste your time. He is a very knowledgeable man who can simplify the most complex parts of riding, making it much, much easier to learn at a progressive rate.

How old are you now, by the way?

So, what’s the plan for your future? I assume, if you’re training so seriously, that you’re coming back to compete in the whole series up here?

Yes, as well as dipping my toes into Supercross waters. My intentions are to come back next year and compete in the Canadian Outdoor series.

Who have you been riding with down there?

When I train with Ryan, I usually train with a couple other guys. Other than that, I’ve mainly just trained on my own. Now that the pros are in the outdoor series I can hop on the track in front of or behind one of the U.S riders for my motos.

How is your speed? Are you feeling improvements?

I feel my speed is definitely improving. I’ve matured as a person this past year which in turn really helped my riding mature. I feel more fluent, solid and confident with my abilities on the bike. I’ve been breaking my riding down and finding my weak points and improving those.

How hot is it training in California in the summertime?

it’s definitely hot! The gym has been alright, but riding… Yup if you did it for fun down here you wouldn’t be going out let’s say that

It’s usually between 25-45 degrees Celsius or 80-105 Fahrenheit. But it’s definitely good for training, much different that humid heat, very dry. After a moto it’s just like you finished showering, minus the cleanliness.

Have you been paying attention to the series up here? What are your thoughts and will the 2 GDR boys close this out to win the titles?

Yes, I have been watching it. Not super closely, but I’ve seen enough to say that Dylan Wright seems very confident with his abilities on the bike and I would imagine more confident with his fitness. I would say he has a very good chance taking the outdoor title home with him.

As far as the 450 class goes, I’ve paid less attention to videos so I’m not sure on how everyone looks with riding, but what Ive seen from Colton Facciotti in the past and what has continued this year is his consistency. I think this late in the game, Colton has a pretty positive chance at winning the outdoor title as well.

OK, it’s been so long since we’ve talked, is there anything else you want to say or that we should know?

I moved out to Vancouver last year after the outdoor season and went to work which was a cool knew experience — got to make some money and got a good break from moto, around 4-5 months. Then I went hard back into it. I felt like I needed the break, it got me feeling really refreshed and determined.

Thanks for answering a few questions today, Jonah. Good luck and who would you like to thank?

Anytime, Billy, thanks for the interview, was fun as always. Yes, I’d like to thank HoleShot Motosport, FXR, RynoPower Canada and Mom & Dad.

Not to disrespect past, present or future champions, but there are only a few classes that I think really count. Obviously, the 250 intermediate class is a super-important one, Supermini, and Schoolboy stand out to me.

There are some great races and battles in the Junior classes, but how many of those kids keep racing and turn Pro? Do you remember back in the day when Davey Fraser would line up on his Supermini, then a few motos later be on a big bike in the Intermediate class? Depending on age and size, some of the really fast kids skip the Junior classes altogether.

Then you get the odd super-fast kid that does a year of Junior, and absolutely destroys everyone all season long. Again, no disrespect to the Junior class and the top guys, but Intermediate or “B class” is the one that counts. And I would have to think the 250 B, quite a bit more than 450 B.

If there’s any chance you’re going to land on a team or even get a look, it’s in the 250 class. Sam Gaynor getting the support ride with Rockstar OTSFF Yamaha was a great move, but I don’t think we will see others following suit. Either way, Congrats to everyone out there lining up and having fun.

As for the big show, Saturday we will crown our champions for 2019. The way it’s looking now, the GDR Fox Racing Honda Team will being bringing home both championships. But this is racing and ANYTHING can happen.

We’ve been talking all season that 5, almost 6-time national champion Colton Facciotti will retire at Walton. If it happens, Colton deserves to go out on his own terms. He’s been a great champion, great role model, and person. I really don’t think I can say anything bad about Colt, because there isn’t anything bad to say.

Personally, I think he had 3-4 more years left at this level battling for and winning championships, but, again, that is me being selfish wanting him to stay. If he does choose to retire, I would think his family and Uncle Blair (Blair Morgan) will be in attendance on Saturday. Just thinking out loud, wouldn’t it be a great idea for the GDR boys to take the entire squad down to Ironman for one last hurrah?

Here are my Walton predictions:

That’s it for me folks, have a great weekend and I’ll see you at Walton on Saturday. #smileforBC

Thanks, Jeff. Again, I have no time to chat or dig for much info to pass on, but I have a couple things I will say before signing off.

He wouldn’t commit to telling me for sure, but #3 Shawn Maffenbeier is here at Walton and says he will ride practice/qualifying to see how his shoulder feels, before committing to lining up for the motos.

I hope you enjoyed our live, nightly race recaps during the TransCan this year. We tried that format and would appreciate your input if you thought that was better than just grabbing people to talk and never really getting to the actual racing.

Well, we’re going live from the TransCan awards tonight at 7:00pm Easter/4 Pacific to let you watch the show tonight.

Various people will sit next to me to talk about things and possibly enjoy a tasty Sneaky Weasel Beer.

Be sure to tune in tonight to catch it. It will, however, go to the archives to be watched at any time you choose.

Also, we’ll be handing out the annual “DMX Total Devotion Award Presented by Club MX,” too, so be sure to check that out and see who wins the coveted “Fox Bronze Boot” and the FREE Yamaha!

If wins it, I think he may be the first rider to win it on back-to-back years.

OK, I’ve had this horrible headache and weird upper stomach pain all week and it affected my work here. I apologize, as I wanted to run around and get some video, too.

You’ll also get a pretty good opportunity to watch me die live on camera tonight, so, again, you don’t want to miss it!

Congratulations to everyone who lined up this weekend, and we’ll see you here for the final round of the 2019 Rockstar Energy Triple Crown MX Nationals. 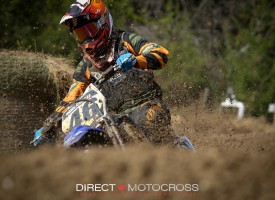