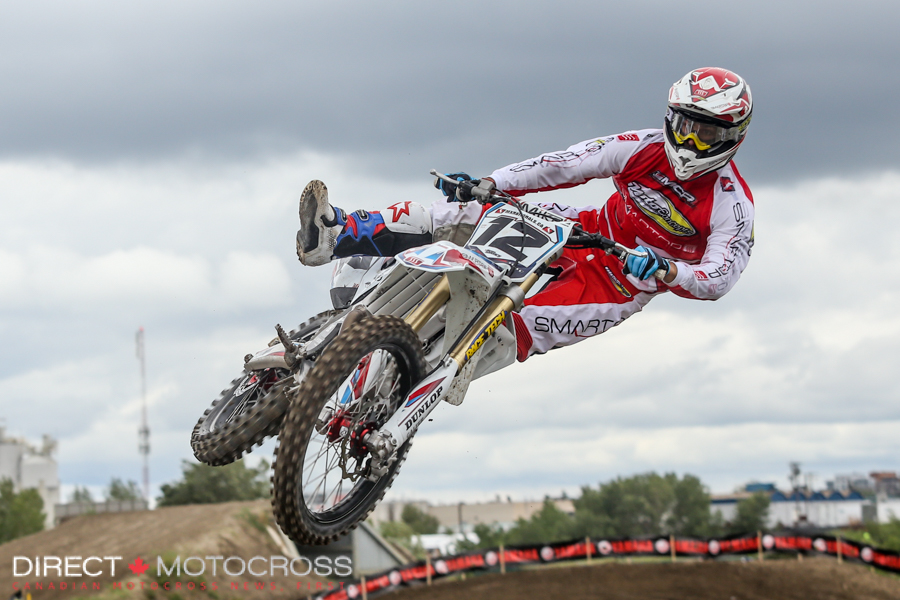 We didn’t get to see the #39 in action here in Canada this past summer, as it belonged to Vince Friese and he never lined up for a moto.

The polarizing 26-year-old rider came to Canada in 2014 and had one of the most memorable battles for a championship we’ve ever seen up here. His rival in the MX2 class was eventual champion, Kaven Benoit. The two riders exchanged wins and paint, but never Christmas cards.

In the end, Vince came up a little short that summer but returned in 2015 to race the MX1 class with the #12 on his Smartops Motoconcepts ride and shocked us all when he won the Calgary round.

We grabbed Vince for a chat today from his home in Menifee, California. In hindsight, we should have let this one run as a podcast. Oh well…

Direct Motocross: Hello, Vince. First off, where did you grow up and how did you get into motocross in the first place?

Vince Friese: I grew up in Missouri and basically my dad rode and my brother rode. I think I was 2 or 3 years old and he had me on a little mini bike, riding before I can even remember. It’s kind of all I’ve done.

What’s your brother’s name and how far did he go in the sport?

My [older] brother’s name is Max. He did pretty good. He did the amateur nationals here at Loretta’s. He was a good, high-level A rider and amateur in America. He got hurt really bad one year and kind of called it quits after that. He’s a mechanic now and he was my mechanic there for a while in the amateur days. Now he’s a mechanic for some Pro riders right now.

“Ya, it was like a full-blown angry mob came over to the truck. It was pretty funny (Laughs). It was wild, that’s for sure.”

How did you pick your very first race number? (My new go-to question)

Man, I honestly don’t know if I remember. I think on a little PW50 I was like 99 or something like that and then my real first number that I liked was 19. I think it was just an assigned number from Loretta’s and I think I did good that year – I think I got second – and I just liked the number. I stuck with that one pretty much for as long as I could until I went Pro and I went with 719 because my dad was always #7 and my brother was #71 and I liked #19 and I went 3-digits so it was #719.

That’s actually the number I would prefer to have right now but they make is do this 2-digit thing down here. It changes every year and nobody can remember the numbers and all that.

What was your best amateur year and best Loretta’s finish?

I won Loretta’s twice. My best amateur year was probably my last one. I’m not sure if it was ’06 or ’07 I’d never won an amateur championship before and I went to Lake Whitney in Texas with a goal of just getting a top 10. I’d been working really hard at MTF and riding a lot. I’d been there the year before and barely even qualified for the final races or whatever. I ended up winning 3 out of the 4 championships that I raced and I went and won another one at Oak Hill.

What class were you in that year?

That was the B class. B class and Schoolboy also.

What year did you turn Pro?

I turned Pro at the end of 2008. I just did the last 3 outdoor nationals and then 2009 was my first year doing the full year in Supercross.

Did you have support that first year? Were you in a team?

Ya, I had…at the time it was MDK and they helped me out with bikes and parts and all that other stuff and I just went to the first national…the Warthog team was kind of what Ted Parkes does. It was a decent program. I brought my own sponsors over from my amateur days. I liked it. I was comfortable with the bikes. I went straight to the 450 because I’d ridden a little bit with some guys like (Justin) Barcia and some of the KTM guys there and they’d run their Pro bikes and my 250F just wouldn’t even compare so I just went to the 450. I knew my bike was at least competitive.

How did you get hooked up with the Smartops Motoconcepts guys?

Basically, I think it was after I’d done Millville, Steal City and Southwick, I believe it was, with that Warthog team and then I went into the following year of Supercross pretty much on the same program. I went and did the first round in Houston, I think, and it was just me and my brother was my mechanic and we drove there with the bike. I think we had the Warthog rig there. We just showed up in a pick-up truck, put the bike in the Warthog tent and went racing.

I actually had a pretty good night. I think I got like a 4th or 5th out of the heat and in the main I was running 10th (?) with just a couple laps to go and I crashed. I think Mike Genova was looking for a 250 guy. My agent Allison Turner was close with Mike Genova and I’d just signed with her after my last amateur year to be my agent and she got the deal going. I believe it was Atlanta the next week I was signed and started racing with Motoconcepts. That was 2009.

That’s been a long time then.

Ya. I think I had 2 years there that I wasn’t with Motoconcepts, actually maybe only 1 year. They’ve been really good to me for a long time now, going on 10 years.

A few years back, it seemed that ever 250 Supercross race you were in, you got together with our Canadian rider, Cole Thompson. What do you remember from that year?

Um, ya, I don’t remember every one but I do remember one in Toronto we had a pretty good battle in the main event. It came down to like a knobby over the finish. I think I smashed him in the second-to-last turn and then he gave it right back at the last turn and I kind of ghost rode my bike over the finish line. I think that was my first-ever top 5, I think he got 6th right behind. I think they gave it to me. My leg got caught in his wheel and it burned the crap out of the back of my leg. It was kind of a crazy one.

We’ve had quite a bit of battles over the years. We’d both get good starts and we were always kind of around each other.

How did the decision come around to race up in Canada the summer of 2014?

Basically, ’14 was one of the years I didn’t sign with Motoconcepts. I signed with Factory Metal Works. It was a Supercross-only deal and they didn’t have a huge budget. It was a first year team to go racing and I actually had a pretty good year. I got 3rd in the championship. I got on the podium in Supercross. I was going into outdoors with no ride and Tony Alessi approached my and asked my if I was interested in going up there. He told me what the bonus program would be like and the whole deal. I was like, heck ya! I could go make some money and win some races and I would be on a good team with a good bike. I’m glad I did.

He remembers the 2014 season in Canada as the most fun he’s ever had racing his motorcycle. | Bigwave photo

The battles with Kaven Benoit were the stuff of legend. What do you remember about that fight?

I loved it. That’s the kind of racing that I live for. It’s awesome. 1 on 1 every weekend we were the fastest two guys and he was tough. He’d get a start and it’d be hard. He knew I was back there and he would get all his starts perfect and when he was on there was no catching him.

He had that 250 2-stroke which was frustrating that year. A lot of the tracks, especially as they got deeper and sandier it was frustrating, but it was a good challenge. That was one of the most fun summers I think I’ve ever had. It got a little crazy there at a couple points. I had fun and I’d love to go back up there again some time.

OK, now I’d already left the track but I heard the french fans at Ulverton surrounded your rig at the end of the day. What happened?

Ya, it was like a full-blown angry mob came over to the truck. It was pretty funny (Laughs). It was wild, that’s for sure.

Did you just stay inside the rig?

I stayed in there until like everybody was gone. I hopped right in the rental car and got out of there.

We didn’t see you this past summer. What did you get up to?

I had a back injury that I got during Supercross that I had to get surgery on so right after Supercross I had that fixed up. I just took some time off and started preparing for this next season.

I plan on doing Monster Cup with Motoconcepts again, Supercross, and a pretty similar program to last year. We’ve got some Honda support, which is awesome and I’ve already begun testing. We’ve been at the Honda track the last few days getting the bike better. That’s the plan right now.

Back surgery kept Vince of the bike this past summer but he’s testing and preparing for the MEC in October. | Bigwave photo

Ya, hopefully he’ll be back on the bike for Anaheim 1. It was a bummer. We were riding together and getting his feedback on the bike too and (Justin) Brayton is in Australia so it’s going to be just me for development on the bike. It was good to have another experienced guy for bike set up and everything, si it was really a bummer when he got hurt.

I want to keep racing as long as I can. I would say at least 5 more years. I think I could probably go longer than that if my body holds up. I like doing this. I’m having fun. That’s one of the reasons I wasn’t too concerned about skipping the outdoors. I’m trying to prolong myself and Supercross is where the real money seems to be right now so I’ll focus on that. If a good deal comes along for the outdoors, I’d love to go do it. Like I said, that summer in ’14 was the most fun I’ve ever had racing my motorcycle.

Well, thanks for the chat today and good luck this season. Who would you like to thank?

Ya, the whole Smartops Motoconcepts Honda team. We’re working hard towards next season. They’ve been with me going on 10 years now, so all those guys: Tony (Alessi), Mike Genova, and the whole team.