The Ladies East had some great racing in 2019, but it also had some drama. The thing with Ladies Motocross is, these girls have a very small window of opportunity before they get pushed out of the sport. They aren’t as lucky as the men, and for some crazy reason they don’t get to sponge off of their parents for many many years like most male pros. But if you think about, it might be a good thing. Most of the women come out to go on to great careers and make friendships that last forever.

Yes, they get their panties in a bunch the odd time like us men, but they, for the most part, keep it clean. They have to, most of them already work full-time at some great jobs and use their vacation time to go racing.

Moral of my little rant…. keep it clean, ladies.

Here are there results from Deschambault and my thoughts.

1st Eve Broader 1-1: Eve did what she could to win the championship and that was ride two great motos for the win. She could have played dirty, but that is not her style. Things behind her didn’t play out to her favour, but she handled everything with class and respect. Eve is the champion in my eyes and anyone who watched the Ladies East in 2019. Good job, Eve!  #mychamp

2nd Isabelle Thibault 2-2: Isabelle has speed and talent, there is no doubt. I loved watching her in the past because of her “don’t give a shit” attitude. But I was very disappointed in her on track antics this season. Right from the first moto at Gopher Dunes, all the way to the last moto at Deschambault. Riding dirty to win is brutal and there isn’t room for it in motocross. Congrats on the championship. I hope it was worth it.

3rd Sarah-Kim Villeneuve 3-3: My most improved, heck, everybody’s most improved. Sarah-Kim was great both motos and all season long. She was another rider that must have had a bullseye, or a target on her as the #192 kept trying to hit her and knock her down. Anyway, Sarah-Kim kept it clean and is rewarded with the #3 plate for the East.

4th Megan Broader 4-4: Just imagine if Megan had more seat time. I know I keep saying it, but she’s good…really good. The Snocross champion rode great in her 2 appearances and finishes the season 12th in points.

5th Brittany Gagne 5-5: To me, Brittany didn’t seem like Brittany this year. In the past she has been a beast. She still has the skills, but the speed just wasn’t present. I hope she resets and comes back because she is one of the best to ever race our series. Britt finished the season 4th in points.

6th Brittani Majcher 6-6: Brittani came up a few years ago to race and has since put in the hard work and improved quite a bit. She’s still not in that top group, but she looks to be the best of the rest this season. With a solid winter under her belt, there is no reason she can’t once again improve. Majcher finished a very solid 5th overall for the East.

7th Jacqueline Riess 7-7:  7’s across the board for Jacqueline, 7-7 for 7th overall for the day and season. Go buy a lottery ticket Jacqueline, you have a new lucky number.

8th Eden Netelkos 8-8: Eden never seemed to get a good start, and was always forced to pass too many girls. I think she rides the sand very well, and with a decent start she should have been in that 4th-7th place spot every moto. Eden only competed in 3 rounds and finished 11th overall.

9th Brooke Merrow 9-9: I can’t say I know much about Brooke. I think she’s from Maine, and I hope she comes back for the series in 2020. She’s got some decent speed, and would be a great addition to the series.

10th Valerie Filion 10-10: I don’t know anything about Valerie, but I liked watching her at Deschambault. Good style on the bike and 2 solid finishes. Hopefully, we see more of her in the future.

Biggest Stud: My Stud is the entire group of girls that busted their asses and bank accounts and drove across the country to help grow the series and support the series.

Biggest Dud: So many girl racers, we should be having qualifiers, but they’d rather be a big fish in a puddle and not support the series. You look so fast on Instagram, why not race?

Biggest Surprise: Sarah-Kim Villeneuve is my surprise. I knew she was good last year, but she got even better this season. With a little better cornering, she could battle for wins one day.

MC’s ‘G’d Up from the Feet Up’ Award: Carrie Davis gets the nod. She always has the nicest helmets and trickiest bikes. I give her a hard time for wearing Tech 7 boots instead of Tech 10’s, but size 7 tech 7’s seem to be the way to go, eh Shawn Maffenbeier?! 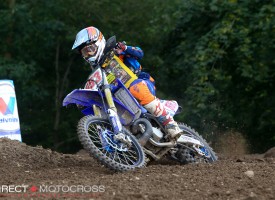 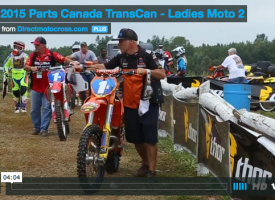