Good morning from another strange weather situation in Southwestern Ontario. Here in London we just got hit by record-breaking rainfall…in January! Yes, it’s normally snow at this time of year, but we’ve been getting some really strange weather this season.

It’s going up to 8 degrees Celsius tomorrow and we just had so much rain that the Thames River has overflowed its banks farther than I’ve ever seen!

Emily and I got some new kayaks last year and we were slightly tempted to drop them in the river at the north end of the city, until we heard all the sirens in our area.

We’re basically across the street from a boat launch just downstream of the forks of the Thames in the centre of the city and the police and fire departments were busy pulling a couple boaters out of the water who lost control and were suffering from hypothermia. We decided to postpone our first trip down the river for a few months.

I went downtown last night to snap a few shots of Harris Park downtown. This is the same park that hosts the annual Rock the Park concert series. This summer it will be Jack Johnson and Vance Joy, but, as you can see, it would be more like Pottahawk right now!

Anyway, the sun is supposed to come out tomorrow, so I guess the river has reached its maximum level and will start receding and get back to its usually useless level, but that’s an entirely different story…

Let me start off by mentioning the passing of longtime Dakar Rally racer, Paulo Goncalves.

We know riding and racing motorcycles is dangerous, but we’re not supposed to lose our lives. I’ve paid more attention to the race this year than I have since the mid-80’s, maybe it’s Chris ‘Adventure Guy’ Vandelaar‘s influence, I’m not sure.

The Dakar put together this tribute video to honour the well-liked and respected racer. RIP, Paulo.

Here’s the highlight video from Stage 7:

It was round 2 of the Monster Energy AMA Supercross series Saturday night. The teams had to get themselves from Anaheim to St Louis, some 1820 miles or 26 hours away. Ouch. Oh, and guess what? They had to hop back in their vehicles and head back to California for this week! Like I’ve always said, there sure is a lot of driving in Motocross racing!

If you haven’t already, be sure to follow the Canadian Team PRMX Instagram page to ride along with Frede Forest as she drives the new rig from round to round and post photos and tells stories from along the way.

Here’s a look at the results and a short version of Jeff McConkey‘s ‘McThoughts:’

OK, have a great week, everyone. From the looks of the forecast around here, there’s a chance Derek Schuster will open Gopher Dunes again tomorrow? I’m sure he’d love it if everyone sent him texts asking him. Hahaha

Oh, we’ve also go the top banner spot set up to be geo-targeted to your company’s specific area. If you’re interested in how it works, please email me at billy@directmotocross.com.

If your dealership is in Alberta, we can set it up to only be seen in Alberta, for example, at an attractive price.

9 Questions for Our Points Leaders, #15 Jess Pettis and #45 Colton Facciotti 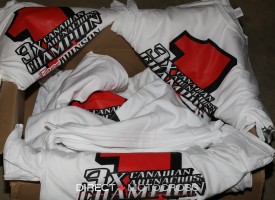