There were a lot of stories from the 2019 Canadian racing season, so I’m sure many will have others they wish to be included here. However, here are 5 that I thought were worthy of this top 5 list.

In the 250 class, #19 Dylan Wright came out swinging and showed everyone that he has the ability to put an entire season together. Consistency to win a title has always been the only question mark surrounding the talented rider from the the Richmond, Ontario, area.

Dylan won the Arenacross title, the Motocross title, and then closed out the Triple Crown series with a 2nd place in the Supercross portion of the series to take the $10K first prize.

He won just over half the races this past year, and is deserving of the title. He now moves up to the 450 class on the Honda Canada GDR Fox Racing team.

In the 450 class, American rider Phil Nicoletti came up to Canada for the entire season and finished where he expected to, but it wasn’t easy.

He was 3rd in Arenacross, 3rd in Motocross, and then won Supercross. It was enough to give him a 29-point win over rival Cole Thompson.

I don’t think anyone was really surprised he was able to win it, but coming to a new country and putting it all together to take a title is a huge accomplishment.

He’ll be back in 2020 to defend his championship on his Rockstar Energy OTSFF Yamaha.

Young Collingwood, Ontario, phenom Jake Tricco came up through the amateur ranks with the eyes of the industry on him. He was fast!

As he moved his way up through Intermediate he earned himself a spot on the Honda Canada GDR Fox Racing team. However, after failing a couple drug tests for THC he decided he just didn’t want to keep chasing the Pro Motocross carrot and left the team.

We saw him line up for fun at the TransCan at Walton Raceway, so it’s nice to see him enjoying riding and racing again.

He has stated that he is done racing professionally, but that he plans to keep riding for fun. Good luck, Jake.

Just like it did several years ago, the Montreal Supercross has left us once again.

Gestev and Eric Peronnard brought the race back to life in 2018 and it looked to be gaining some momentum this past fall, but the news came out that they wouldn’t be bringing it back for the 2020 season.

It was a tricky bit of racing business having invited American Pros come up to race this one round of our Triple Crown SX Series, but the fans seemed to be returning to Olympic Stadium to watch.

We have no Vancouver, no Toronto, and now no Montreal again, as far as true stadium races are concerned. It’s a big hole in our sport that will hopefully be refilled in the future.

Political unrest caused Team Canada MXON to be absent from the racing at the MXON yet again.

The CMA is the recognized sanctioning body by the FIM that runs the Motocross of Nations and this is the spot where the friction remains, as would-be team managers clash with the CMA’s upper management.

We almost went with Carl Bastedo as Team Manager, but one by one riders and teams pulled their support of the event until changes are made with our system of FIM recognition.

The most unfortunate part of this whole thing is that riders have such limited time in their short careers to represent Canada that they are the ones losing in all this unrest.

Hopefully, 2020 is the year we get past the issue and put our riders and country on the world stage where they belong.

When someone wins their 6th Canadian 450 Motocross title, it’s huge news (Actually, it’s only ever happened once before, but that’s another story). When someone does it in their retirement year, it’s even bigger news.

Colton Facciotti ended his 2018 season with that scary crash with Cole Thompson. We knew it was either going to be the thing that sent him on his way to retirement or that brought him back to avenge the situation. Fortunately for him and us, it was the latter.

Colton focussed all his attention on the MX portion of the Triple Crown series and ended up winning his 6th title by 22 points over his Honda Canada GDR Fox Racing teammate.

This final championship broke his deadlock with the legendary JSR and puts him in rarified air with only the great Ross Pederson.

Congratulations on going out on top and on your own terms, Colton.

So, those are 5 of the stories I felt were worthy of mention in this particular countdown. This time of year is always a good one for these lists, and I’ll continue posting them as we also ushered in a new decade this past New Year’s Eve. 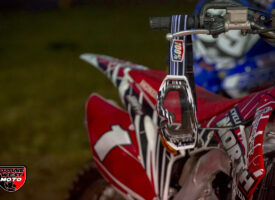