This week’s race coverage is brought to you by Duroy Racing KTM. Give them a click.

The sand tracks will come to an end this coming weekend when the Rockstar Energy MX Nationals hit River Glade in Moncton, NB, but last Sunday in Deschambault, Quebec, was a different story. Three weeks of sand racing come to an end when we leave the town that sits 60kms west of Quebec City on the north shore of the St. Lawrence River.

Everyone enjoys riding the track and the fans always come out in droves. Here’s a closer look at another day at the races that didn’t disappoint.

As always, the day starts out with the riders’ meeting run by CMRC Head Referee Paul Kingsley. Here, he’s explaining how gates are picked to the new riders.

It rained overnight and then started again early in the day. I was worried all my photos would be taken from inside this garage.

The early question for some of the riders was whether or not a full sand tire was needed. Here’s Monster Energy Thor Kawasaki’s Jason Hughes bringing the extra wheel over to compare during practice. They all went with full sand tires, I believe.

#17 Redemption Racing Fly Dragon KTM rider Seth Rarick suffered a mechanical in the first and left the team scrambling to be ready for the 2nd. Unfortunately, Seth decided to sit the second moto out and then announced his departure from the team. They split on good terms and the team will have #10 Nathan Bles on the 250 2-stroke in MX2 in Moncton this week.

When the gate dropped for the first MX2 moto, it was Royal Distributing Fox Racing KTM’s Kaven Benoit doing his thing again. You know what comes next!

It was a rough start for BC’s #51 Fly Racing Kawasaki’s Brock Leitner. Contact with another rider ripped off a hose and ended his moto. He came back in the 2nd for a 19th and 24th overall. I know riders hate when we take these shots but this is actually one we/he will remember.

#456 Honda Canada Motovan Oakley rider JC Bujold was the Intermediate to beat in the first, taking 16th, but this mechanical in the 2nd ended his day and put him 21st overall.

There were rumours Mike Treadwell might show up and then there he was, but with a KTM 250 2-stroke in the MX2 class. 18-22 gave him 19th. He said we should see him again in Ulverton.

North Carolina’s #62 JMR Suzuki’s Bobby Piazza looked great in the first moto, running up in 4th for the first 4 laps. Unfortunately, he “threw a chain” causing a DNF. His 2nd moto 8th gave him 18th.

#9 Strikt Racing Scott RMX Yamaha rider Morgan Burger had to get his bike back together before the weekend and came out with 15-15 motos for 15th.

St. Phillippe rider #29 Duroy Racing Motovan KTM rider Jeremy Pronovost loves Deschambault. He actually took a 3rd in a moto back in 2013! His 11-17 14th was not indicative of his speed.

#21 Honda Canada TLD GDR rider Jeremy Medaglia doesn’t usually make an appearance in these reports this early. He was out in 2nd place early in the first but engine problems forced him onto the mechanics’ area and then the pits for a DNF. He came back for a solid 3rd in the 2nd for 13th overall.

Medaglia’s teammate, #34 Westen Wrozyne, has looked solid since joining the series at Gopher Dunes. His 14-11 gave him 11th.

Vernon Motorsports Thor Yamaha’s #39 Jess Pettis led the 2nd moto when Benoit faltered. It must ave felt great for the young rider out of Prince George, BC. He hung on for 7th in that moto. His 8-7 put him 6th to tie his best in Nanaimo.

#20 Canada’s Motorcycle FXR Yamaha’s Dylan Wright was in a dog fight in the first moto. His 4-5 put him 5th overall.

That fight was with Rockstar OTSFF Yamaha’s #14 Shawn Maffenbeier. Here’s a first moto sequence that Dylan got the best of.

#105 Canada’s Motorcycle FXR Yamaha’s Jimmy Decotis was solid in the first moto with a 2nd place. He was way back outside the top 20 early in the 2nd but clawed his way up to 6th to salvage a solid 4th on the day.

Even though he wasn’t feeling 100%, #762 Devil’s Lake MX Ansr Yamaha’s Blake Savage was fast in practice and it tuned into his first podium of the season. 3-4 put him 3rd overall.

We keep saying Maffenbeier will come on strong late in the season and so far he’s proving us right. His 5-2 motos gave him 2nd overall and he’s brimming with confidence heading into some of his best tracks.

Will #1 Royal Distributing Fox Racing KTM’s Kaven Benoit even lose a moto in the east? It’s not looking like it! He won both motos again in Deschambault in front of an enthusiastic Quebec crowd.

Always a fan favourite in Quebec, Benoit Milot and his Milotland Tour hit the stage during the intermission.

You show up with the bike brand and rider number shaved into your head, you get a signed jersey. That’s just science.

I’ll give your three guesses at which gate GDR’s Derek Schuster packed and the first two don’t count.

At first, I wasn’t sure what Cole Thompson’s dad, Kevin, was doing sitting in the shadows with a second bike. Just in case there’s a problem on the sight lap, another bike is ready.

All the usual suspects were up front when the gate dropped fir MX1.

After pulling into the mechanics’ area in the first moto for repairs, #5 Monster Energy Thor Kawasaki’s Teddy Maier headed back out and tried to make some time. A big crash left him with what is being reported as a broken right wrist and a broken left thumb. We’ll catch up with the Iowa rider as soon as we can. Good luck, Teddy.

#35 Matthew Davenport finished 19-17 for 18th place. He said he’s fighting negative thoughts and that whenever he’d try to leave the main line to make a pass, he’d get passed himself.

#761 Redemption Racing Fly Dragon KTM’s Cade Clason went for the quad that nobody thought was there on Sunday. He didn’t make it and came away with 7-29 motos for 16th. He had minor bike issues just past the mechs’ area and had to head back in the 2nd. He still said it was his “best moto I’ve had all year!”

Duroy Racing Motovan Oakley KTM rider #26 Michael Da Silva loves Deschambault and he was up in the mix all day. His 11-14 motos put him up in 13th.

#24 Devil’s Lake MX Ansr Yamaha’s Kyle Swanson made the racing sound easy. His bike never seemed to be screaming or struggling. 8-8 put him up in 8th spot.

#38 Tim Tremblay showed up and surprised us all. He lined up in the MX1 class and made an immediate impressing, taking 7th overall (9-7).

#7 Rockstar OTSFF Yamaha’s Bobby Kiniry was consistent all day but just a tad off the pace of the lead 5 riders. His 6-6 gave him 6th.

#3 Parts Canada Thor Husqvarna’s Tyler Medaglia had a solid day with 5-4 motos for 5th. He reeled Cole Thompson in both motos and finished just behind him in each.

Well, actually UNder him in the last corner of the first moto! The two came together in this final corner and Tyler took a hard hit into the bridge. He’ll get his arm x-rayed today.

Thompson would go on to finish 4th with a rather upset Medaglia getting up to hold the position.

#148 Cole Thompson had the speed to challenge for wins in Deschambault but some uncharacteristic arm pump left him without feeling in his hands. 4-3 put him 4th.

The second MX1 moto blasts off.

The MX1 motos were amazing again! Actually, #101 Matt Goerke is out of sight in the hole between Thompson and Metcalfe in this shot!

Honda Canada TLD GDR’s Colton Facciotti did it again in the first MX1 moto and made it look pretty easy.

Colton was out front in the 2nd but got cross-rutted in an off-camber left turn. Metcalfe said he grabbed a handful of whiskey throttle and smashed into the rear wheel of Facciotti taking the champ down and trapping him under his bike for “a minute.” Facciotti would remount and finish with 1-5 motos for 3rd.

It was another one of these days with #123 Monster Energy Thor Kawasaki’s Brett Metcalfe and #101 Rockstar OTSFF Yamaha’s Matt Goerke going at it tooth and nail.

Fighting their ways through the lapped traffic, the top riders put on another great show for the packed crowd. 3-2 gave Metcalfe 2nd place.

The top riders are going to have to start taking ‘W’s’ if they want to challenge the consistency of Goerke.

Goerke’s 2-1 gave him another overall.

This is how close the fight for 2nd was in the first. Nobody in the top 4 or 5 is happy without a win.

Goerke hits the stage for the win.

It was another great event at Deschambault and they were happy to announce they’d be back in 2016.

Great job to everyone and to the ‘Franglish’ spoken all day on the mic.

There was nothing left to do but clean up and get ready to head east to New Brunswick for round 8.

Hey, Brad Nauditt, you’re making soap stains on the #dmxvan! Thank you. See you at the races… 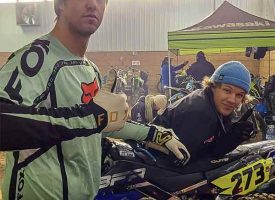 A Few Photos from 2022 LRX Arenacross 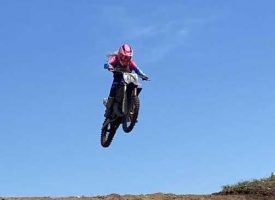 Out of the Blue | Auburn Manders | Presented by Schrader’s 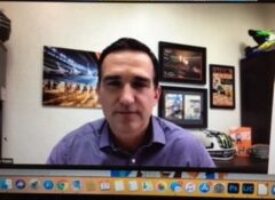