Welcome to a very busy Monday Morning Coffee here at Direct Motocross. Now I know what it’s like to be from a city that hosts one of our major moto events…it feels really good! Waking up in my own bed and driving across the city to get to the London Agriplex for rounds 1 and 2 of the Monster Energy Canadian Arenacross Tour Presented by Royal Distributing was as easy as pie (even though I wouldn’t know the first step in making a pie. Fruit? Will I need some fruit?).

After months and months of rumours and preparation, it finally happened. We’d all wondered whether Arenacross was coming back to Ontario for real and it was proven to be true and done in a grand scale and a very professional manner – it really looked like a big event was taking place!

Many have tried before, and many have failed, but the AX Tour gang looks to have made a successful areanacross series that makes stops in Ontario a reality. I don’t know why, but they just never seem to have been able to gain the industry or rider support needed for longevity in the past here in the most densely populated province in the country.

Justin Thompson and his crew built a very competitive track both nights and they were happy with the entries. Neither night was a sell out, but there were enough bums in the seats to make it look like it was a success. London is a strange, white-collar town and sometimes motorized events are a tough sell around here. Not to mention, it was Homecoming Weekend here for Western University alumni. It may not be that big of a deal where you’re from, but we Mustangs seem to take it pretty seriously. Almost every hotel was booked and so most arenacross people had to head to the outskirts of the city of 381 000 to find a room. Our Western Mustangs beat the Carlton Whatevers 48-25 by the way.

While I was busy sharing online commentating duties with Andy White, Tyler Spikman was on hand to take photos for Direct Motocross, so watch for a photo report later here on the site. Here’s a look at the racing results:

If you didn’t get a chance to tune in to the Valvoline AX Tour Live Broadcast either night, Round 2 has gone to archives and you can it here:

Rounds 3 and 4 take place Friday and Saturday nights Thanksgiving Weekend in Sarnia, Ontario. You can get all the information you need right HERE. It’s a bigger venue and so the track will feature longer laps and possibly higher speeds. You don’t want to miss it!

Congratulations to France for winning their second consecutive Chamberlain Trophy in Ernée, France Sunday. The Americans kept it exciting and only trailed the French team by 2 points at the end of the final moto. Romain Fevre showed why he is the 2015 World MXGP champion, Cooper Webb may be kicking himself today for stalling the engine, and Ben Townley blew everyone’s mind by leading and then almost winning! Here is the highlight video from MXGP.com:

Well, I managed to get out of doing this event this year, but poor Jeff McConkey wasn’t so lucky. Victoria Hett from Husqvarna Canada set him up with a TE 250 for the event and Jeff was all set to take a run at one of the hardest motorcycle events in the world. How did he do, you ask? Well, I won’t spoil his upcoming story but I will quote his text to me after his early departure from the ‘race:’

Crashed out, timed out, quit. DNF. Thought I broke elbow at first. Just deep bone bruise and pressure cut. Rock faces were insane. Think I saw Chuck Norris crying in the corner LOL. That Husky is the toughest bike ever. Was smoking so bad I thought it was on fire twice. Had to launch it / ghost ride it numerous times up rock faces and it’s still mint. Well, kinda LOL.

Word on the street is he made it as far as the first gas stop and that was all he had. Truthfully, I think it’s great for the reputation of the Corduroy Enduro that Jeff wasn’t able to complete it. I joked with him last week when he asked which gear he should wear for Day 2. Of course, I said, “Um, you won’t make it to Day 2!” Sorry, Jeff. Maybe next year? Hahahaha.

Watch for an article by Jeff that will detail every second of his painful experience…it won’t be a very long article, however.

I got the opportunity to set up a small area out with some other exhibitors at the Parts Canada Showcase here in London, Ontario. The annual event has really grown since the last time I was there to check it out! I’ve never set any sort of ‘booth’ up at one of these kinds of things for Direct Motocross and don’t really have the tools to do it yet, so I did what I could. I’ll let GDR Racing’s Derek Schuster sum it up for you: 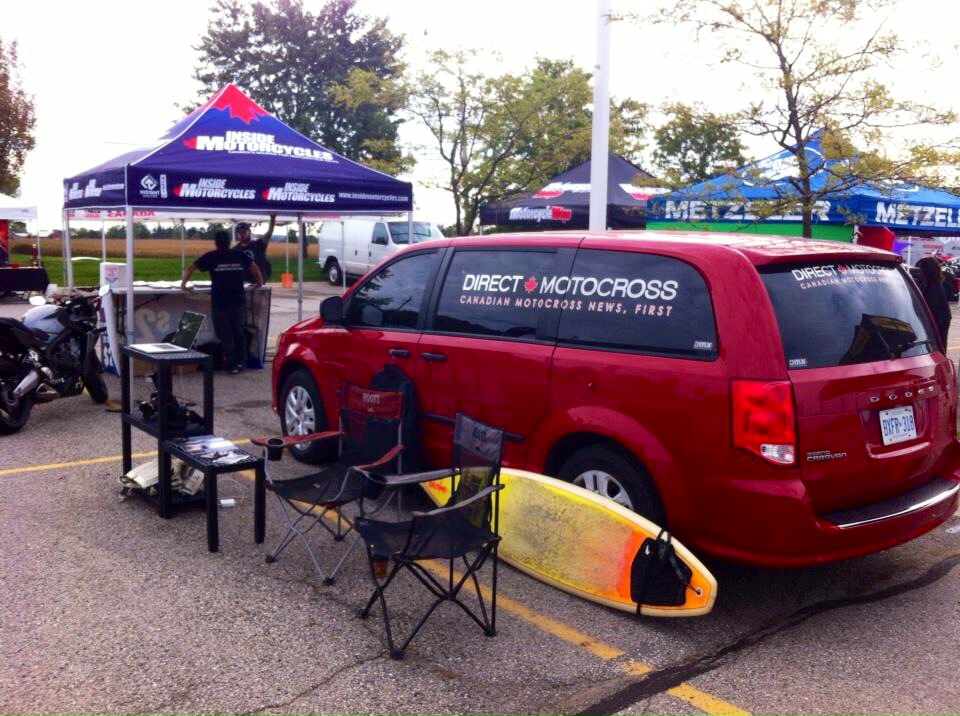 “I love your booth: two lawn chairs, some random s#!t, and a surfboard!” – Derek Schuster

What if I didn’t have the van?! Then what would my ‘booth’ have looked like? Anyway, it was a fun day and I got a chance to meet and talk with a bunch of people from all over North America. Here are a couple photos from the day: 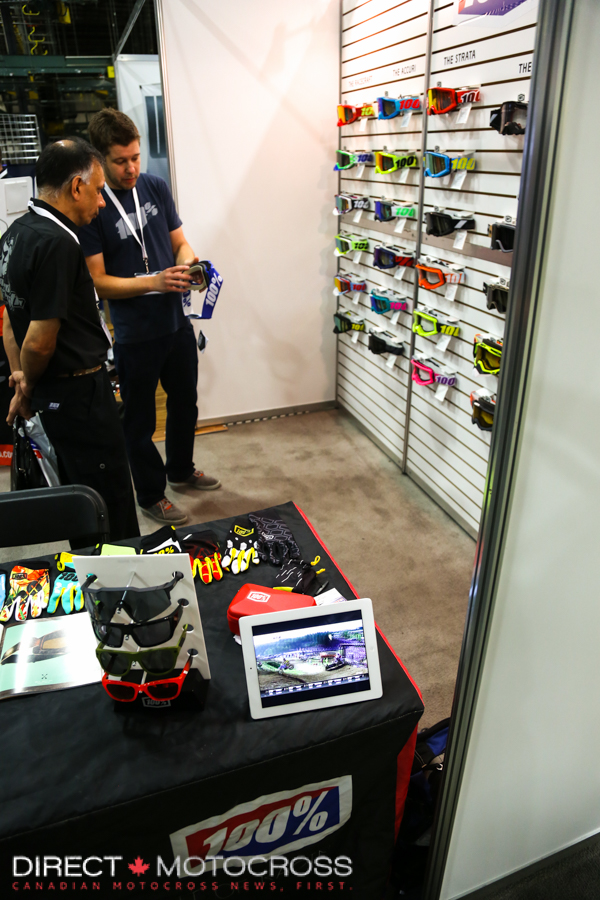 I wandered inside and found Brad McLean sowing the new 100% goggle line up. More importantly, is that a tablet streaming the MXON from France on the table I see? 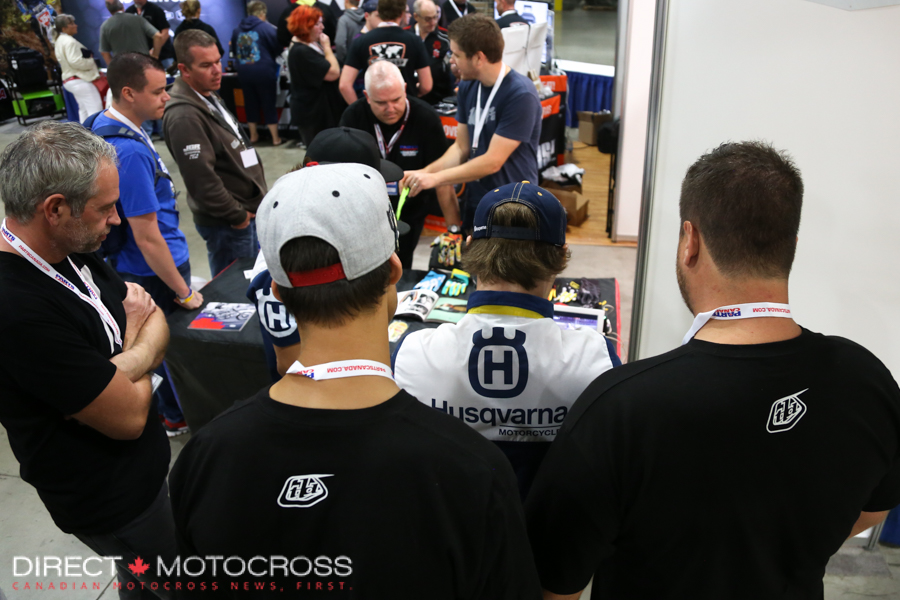 Yes it is! Thanks Herve Orny for the set up. I stood there for almost 45 minutes with Herve, Colton Facciotti, Tyler Medaglia, and Derek Schuster. 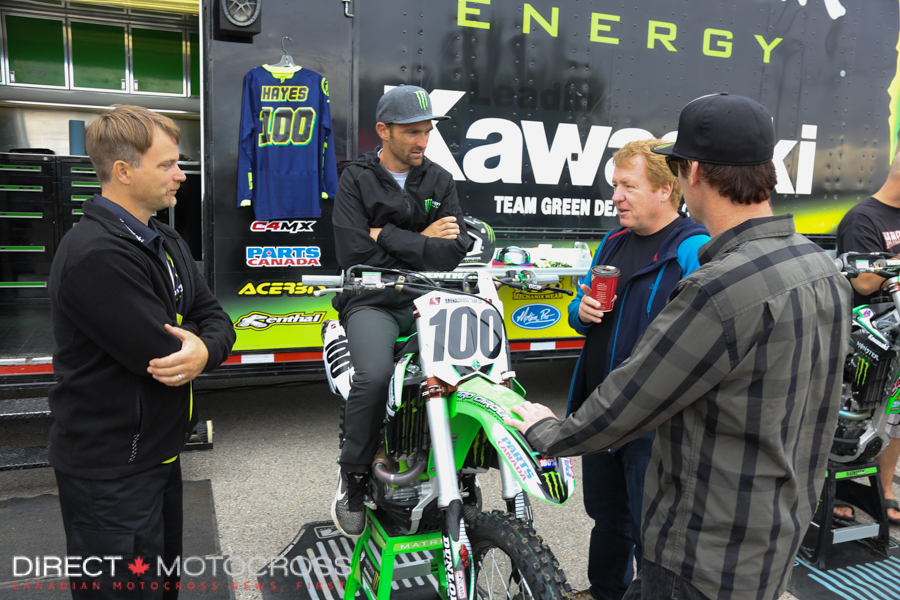 Yes, that’s Brett Metcalfe hanging out in the parking lot holding court with Jason Hughes, Andy White, and Justin Thompson. Metty says he plans to be back in Canada in 2016, but riding for whom??? The stakes are high! 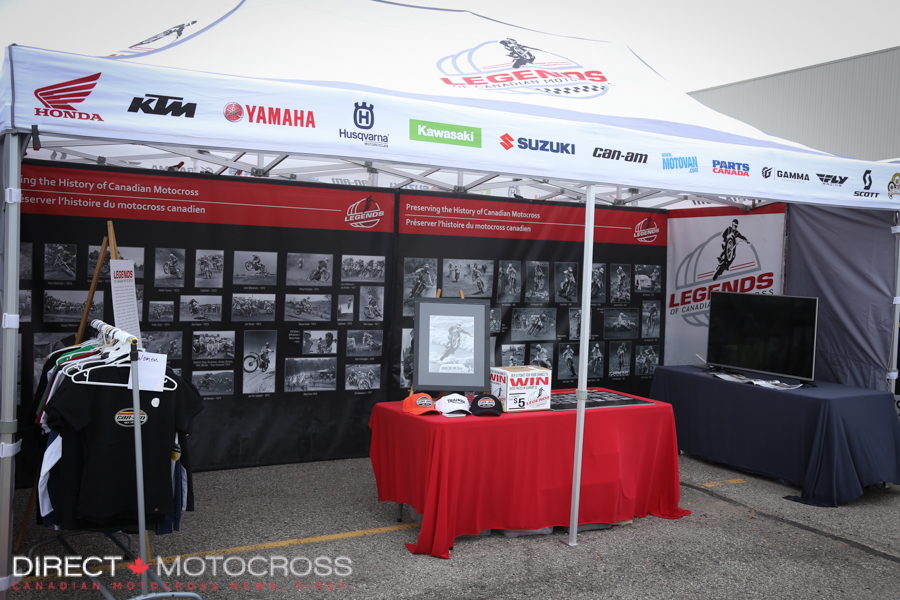 Bill Petro was also there with his Legends of Canadian Motocross set up. 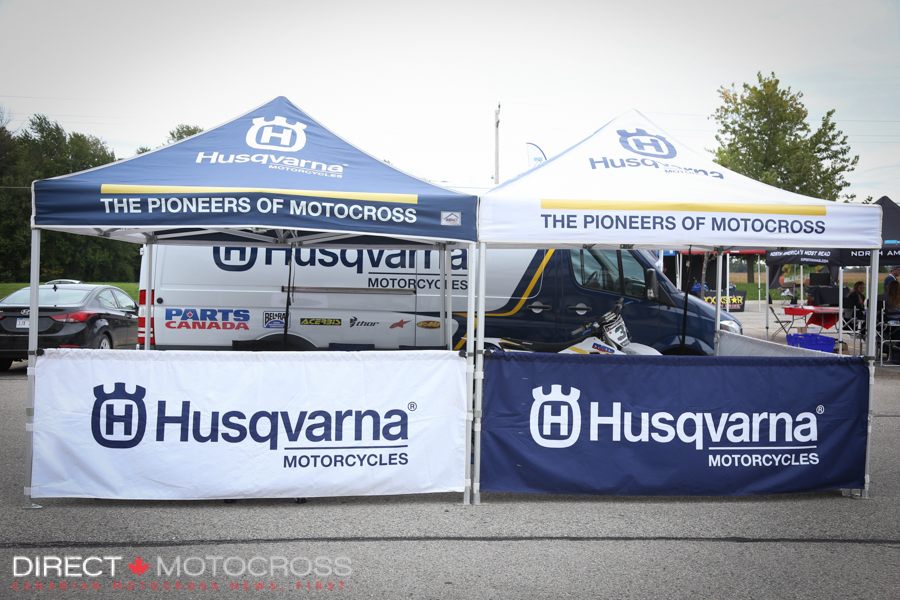 Victoria, all you had to do is ask and we could have had McConkey in there signing autographs for Husky. We KNOW he wasn’t doing anything Sunday! 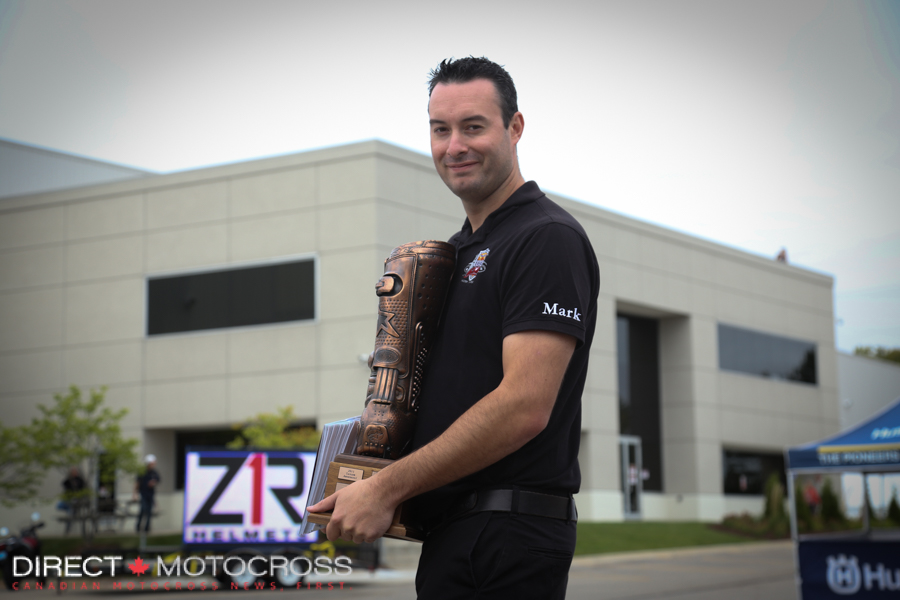 Mark Perrin with the coveted Alpinestars Bronze Boot. He should have white gloves on like that Stanley Cup guy. 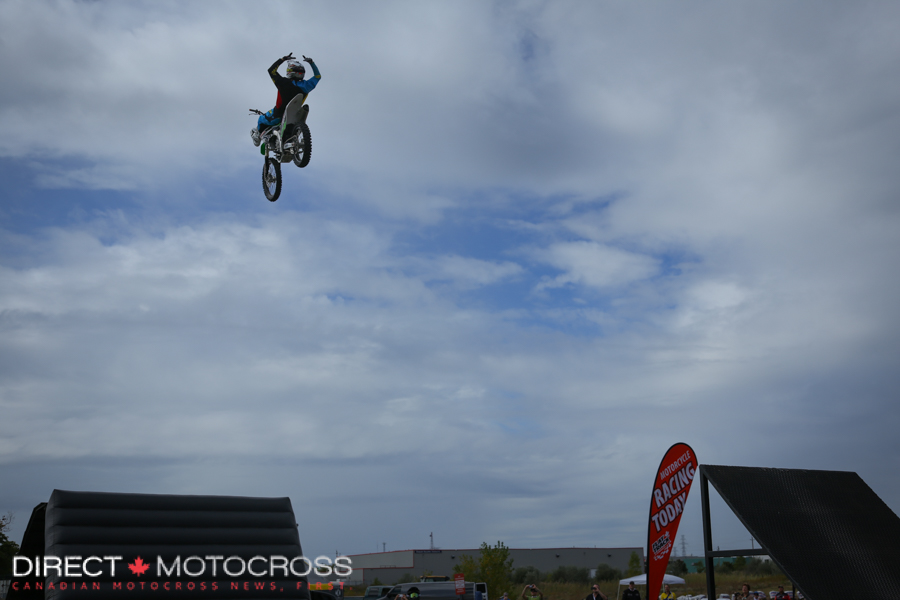 Billy Van Vugt and his crew tried to put on a FMX show but it was just a little too windy to do all the things they wanted. 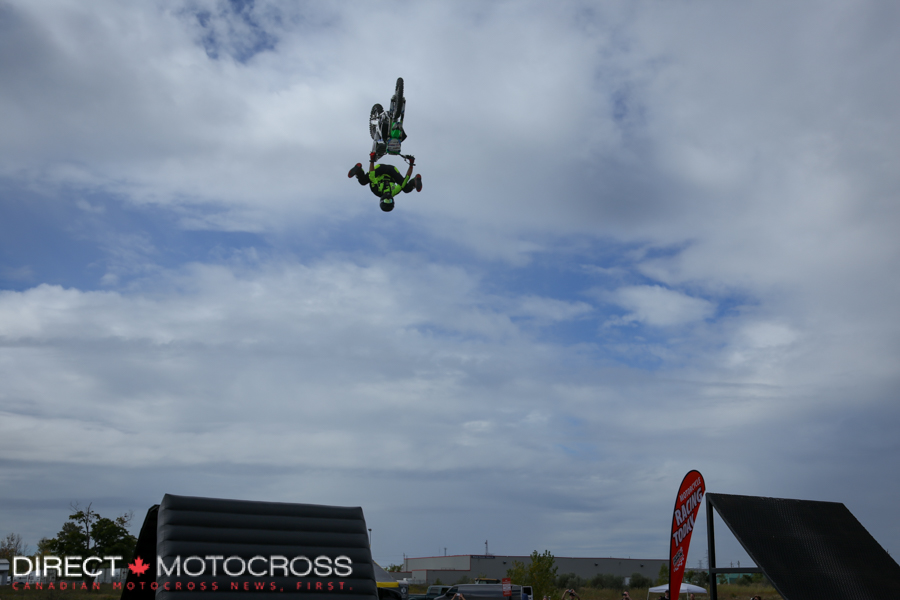 Keith Sayers managed to pull off this backflip combo even though the wind was doing its best to push them to the right. 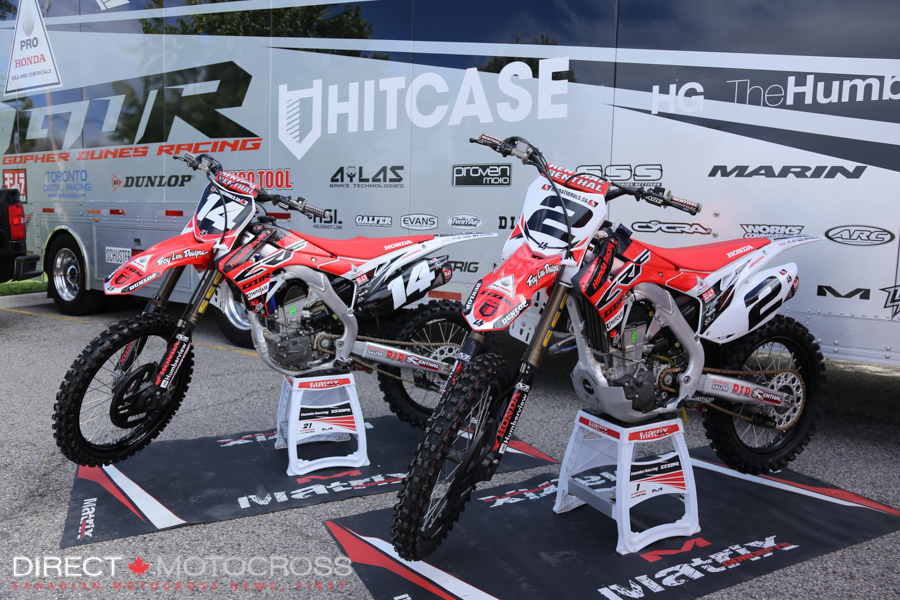 The Honda Canada TLD GDR rig was there with a sneak peek at Jeremy Medaglia and Colton Facciotti’s 2016 numbers. Apparently, Jeremy wasn’t even given the option to run #13. 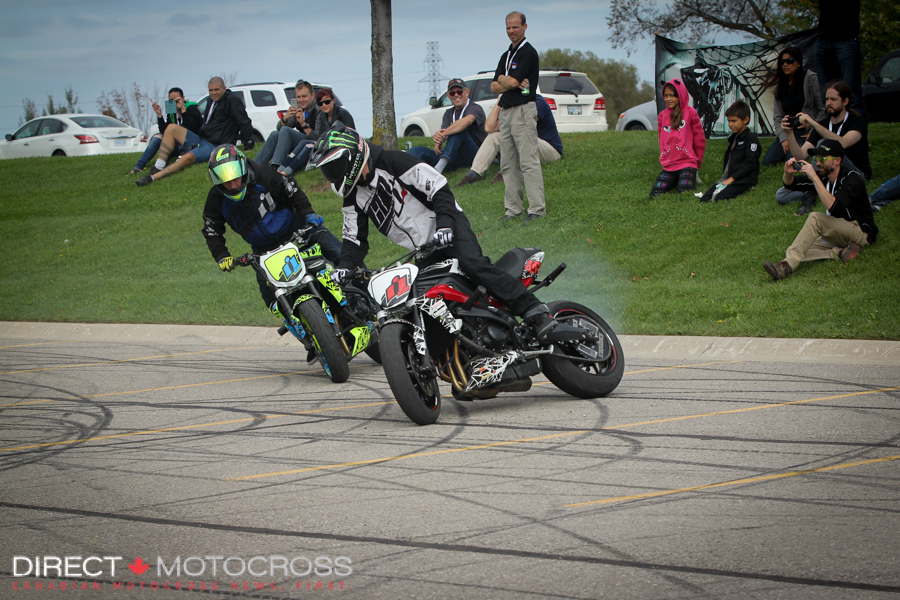 I’m not much of a freestyle road bike guy, but I found myself being very entertained by these two guys who are among the world’s best. They sure made a mess of the parking lot…and sprayed a little rubber on Ernie’s Kawasaki rig too.

Well, I think I here my new Scott Solace Disc road bike calling. It’s been a long weekend and now it’s time to get in a little exercise. This 2015 XL Scott bike is for sale. If you want a great deal on an amazingly comfortable, carbon bike, email me at billy@directmotocross,com. The leaves are starting to change and the temperature is dropping, don’t say I didn’t tell you to go ride when it’s -10 and snowy in a couple months. Get out there! Thanks for reading and have a great week. Now get back to work! 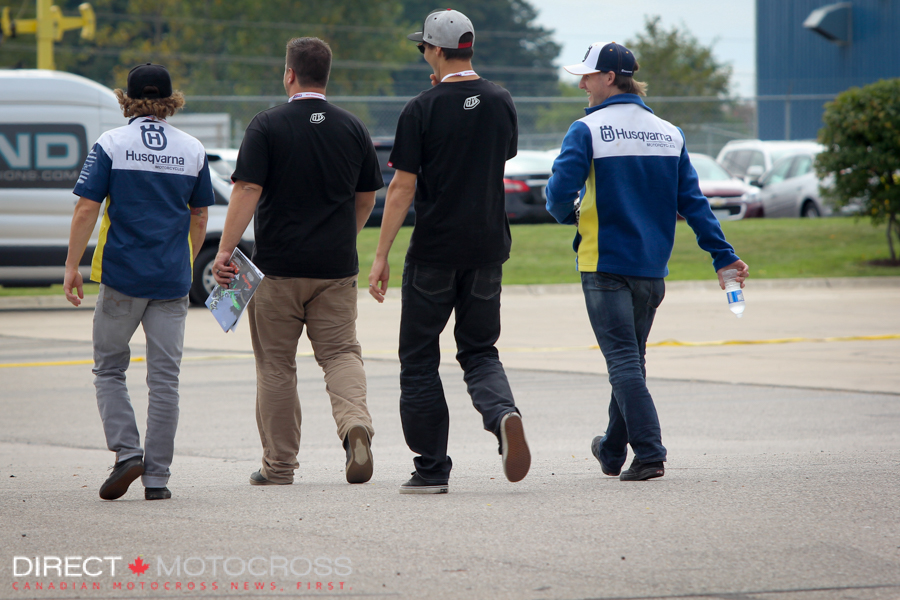 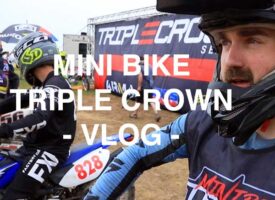 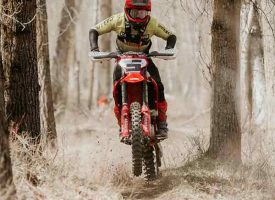 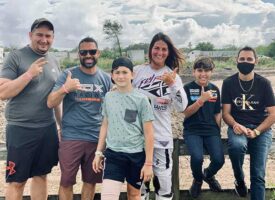