I always get asked this question and honestly, I can’t remember a time when I haven’t loved motorcycles. My dad raced when he was younger and I guess the passion was just in my blood. I didn’t watch Jeremy McGrath on TV or anything like that. Just hearing about motocross and bikes from my dad got me hooked! After begging and begging to get a dirt bike, my parents made me a deal that if I did well in BMX, I could race moto. I got a national championship in 2006 in BMX, so my parents let me race. My family has been supporting me ever since!

That’s a tough one! It’s definitely a battle between Glen Helen in Cali, and Red Bud in Michigan. They’re both amazing tracks with lots of elevation change and awesome dirt.

For off-road I’d have to go with the Ironman GNCC. I have some awesome memories there.

It’s hard to say. There are so many great riders out there and they all have my respect and a heck of a lot of talent. If I had to name one though, it would be Christian Craig. He’s definitely someone I look up too. After suffering a serious injury to his back, he still came back to race. I think it’s awesome he had the courage to come back and continue to fight for a championship.

Tyler Medaglia. He came to a few GNCC’s this year and killed it! He’s a cool guy to talk to in the pits, as well. Not many guys can show up from a moto background, race for 3 hours in Florida sand and come out with a top 5. He has some gnarly skill on a bike, that’s for sure.

My goal for this season is just to figure out my 2016. As of now, I’m just jumping back and forth between different disciplines of racing and just getting everything dialed in so I’m ready for whatever 2016 throws at me. [My] main focus though is obviously GNCC, trying to get my fitness up so I can be contending for the win every weekend. Hopefully, by the end of the year, I can get a win in 200B and if I happen to move to the 250f, I hope to get a podium position in the 250B class. My speed is there, now it’s just working to get the fitness of a 3-hour race.

I also plan to get my Pro license for Canadian XC’s and Enduro’s by the end of the summer.

There have been a lot of awesome opportunities that I’m really thankful for! Being chosen to represent Canada at the FIM JR World Motocross Championships for 2010 and 2011 in the 65cc class was an awesome experience. Unfortunately, in 2010 I could not compete in France due to an injury, but I was able to compete in Italy in 2011. It was great to race outside of North America and see a whole new look on racing. Representing Canada was awesome as well!

Winning GNCC’s, national championships and riding for a lot of awesome teams has also been really cool!

Love it or hate it, my favourite time at the races is when the race is over – especially in off-road. There is no better feeling in the world than crossing that finish line, knowing you went through absolute hell to get there. It’s when all the work pays off. I absolutely love racing my dirt bike but nothing can beat that feeling.

His favourite part about going to the races is that feeling you get when you cross the finish line. – Race Day Pics photo

When I’m not racing, I’m practicing, building trails, riding DH mountain bikes, working on my school, and most of the time editing/filming videos for my video page @findingtomorrowsculture.

I’ll start off with you, Jeff, for giving me this awesome opportunity. Also, my whole family for supporting me throughout my whole career, Andy White, FXR, TAW Performance, Brembo, WRP, Scott, Forma, Nihilo Concepts, Deft Family, Fuel, Atlas Brace, Matrix, Core, FTC, Golden Tyre, DT1, LB graphics and everyone who has gotten me to this point! 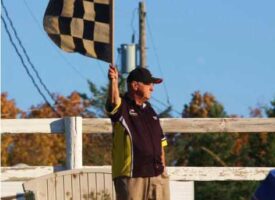 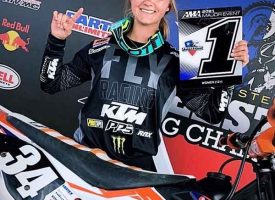 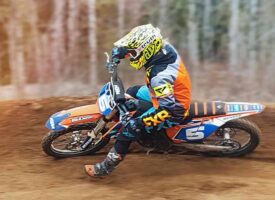 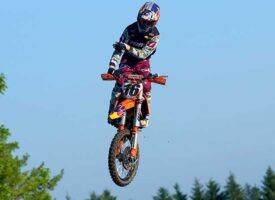