My friend group at the time and my dad, of course!

My family always had quads growing up. We always went on trips and adventures together or rode around our neighborhood. In 2005, my dad bought me my first race quad and I decided I wanted to race. Unfortunately, there was no “Ladies Quad Class” so I was thrown in with the boys to race. It was definitely intimidating being a female out there…usually at the gate there were 2-3 girls and 10 guys. I raced consistently from 2005-2013 then took a few years off to work on my career.

Last year, my boyfriend convinced me (after 5 years of convincing) to buy a dirt bike, so I did (Laughs). I couldn’t even corner on it. It was completely different than a race quad, I felt so awkward on it. After about a month or 2 of practicing at the track, I started to pick up on it and I was getting faster each ride. I then decided (still not really knowing what I was doing) to race this year. I’m having a blast and am doing well. I’m so happy I decided to do it. I’ve made a lot of new female race friends and have a wicked little moto family.

I’ve always had a love for anything to do with a motor growing up. I was always the Tomboy in school and played every sport there was. My dad got me my first dirt bike when I was 7 years old (not knowing how to ride) and the first thing I did was pin it into a mud hole and flew off the bike. He knew as soon as I got up and wiped the smile off my face that I was going to be in it for the long haul!

I don’t! I think the female riders in the PMA are very welcoming and motivating. I found it easy to make friends with a lot of the girls this year.

Ricky Carmichael because he is insane! Most AMA wins of all time with 2 perfect seasons. He is unreal to watch! Even now when he gets back on a bike, he kills it.

“I don’t want to set the bar too high. My main goal is to keep improving each ride and work on getting comfy on the bigger jumps.”|Carly’s Creations photo

Jolene Van Vugt, she is so rad. To be the first female to backflip a dirt bike is sick! And to hang out with all the Nitro Circus guys on the daily pulling wild and crazy stunts is badass. She is the definition of “Girls do it better.”

For such a young rider, he has put so much hard work and dedication into his career it’s mega-inspiring. When he’s not racing, he is coaching kids/adults basic riding skills, rider safety and efficiency. Plus, he likes donuts!

Fort St. John track because it hits home. It was my first track I rode on both a quad and dirtbike. I also like Chetwynd a lot. It’s super soft and fun.

A person who has overcame their fears and stepped aside from the “I cant’s and I wont’s.” Hard work and dedication make motocross. I look up to anyone who lines up on the gate and gives it 100% out there!

Play it safe and have fun. It’s my first year racing 2 wheels, I don’t want to set the bar too high. My main goal is to keep improving each ride and work on getting comfy on the bigger jumps.

I’ve had a few Podium year end championships in the years of racing quads. This year on my dirtbike I’ve hit top 3 a couple races now, so I’m pumped. As long as I’m having fun, I feel like it’s an accomplishment.

When you wake up bright and early at the track and the first thing you smell is race fuel. I love going to the races and seeing riders cheering for other riders. I love the feeling when you’re on the gate and you’re not sure if you’re going to throw up or have a heart attack. I mainly love everything about racing (Laughs)!

If I’m not racing, you can find me at the gym training my clients or kicking it at home with my animals. I love to wakeboard, wake surf, snowboard, camp, hike, fish and pretty much play any sport.

I think it’s important and a bonus. You spend majority of your time at the track practicing during the week and you’re always gone on weekends to race. It becomes your lifestyle. And what better way to share that lifestyle than with someone who has the same love for motocross as you do!

Thanks to Jeff for hitting me up with this wicked opportunity, my parents for helping me out in my years of racing and a massive thanks to my boyfriend, Denan, without him I probably wouldn’t even have a dirt bike! He’s my coach on and off the track and he’s the reason why I’ve improved as much as I have and why my bike stays maintained. I’d also like to thank my little moto family: Den, Steph, Adam, Simon, Chelan and Erik – ya’ll rock! Cheers to Race Season 2016!

Out of the Blue: Amiee Carter 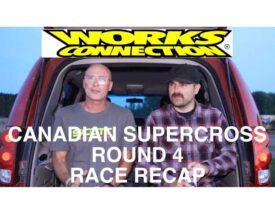