For those of you who couldn’t be there, I tried to jot down some of what the podium riders had to say when they went up to accept their trophies and fan accolades. I’m not going to put quotation mark on these because I’m not under oath here and I may have made the odd typo while trying to print at breakneck speed.

Here’s what they had to say this past weekend in Calgary:

#7 Dominique Daffé: I had a lot of fun this season. The bike theft sort of took off the pressure this season.

#6 Brittany Danyluk: I was shooting for top 3 this season. (She finished 3rd.)

#3 Sara King: It hasn’t set in yet that I won! I’m not sure what’s next for me but maybe I’ll ship my bike to Walton?

#1 Kaven Benoit: I had a horrible start (he was around 10th at first turn). Jimmy took off at the beginning. I need to get a better start and I can’t ride other guys’ lines on a 2-stroke.

#20 Dylan Wright: I wanted some passing lines. I knew I had to attack Jeremy (Medaglia) fast. After I got around him I pumped up a little. I saw some good line to pass on and some to NOT use again.

#105 Jimmy Decotis: When asked if it got boring out front: It never gets boring riding a dirt bike! Kaven and I were running the same lap times. You just can’t compare this place to Nanaimo.

#148 Cole Thompson: It was good to lead for a little bit. I need to find more speed for the 2nd moto and we’ll make a few adjustments for the 2nd moto. You’ve gotta be there at the end.

#101 Matt Goerke: I didn’t even know I got 2nd! The lens blew out of my goggles and I didn’t see pit board once. The lens pushed in. I’m having fun and I’ll be back next year for sure.

#12 Vince Friese: Brett (Metcalfe) was riding good. The roost was tough and then Brett had a bike problem. It was just time to be on the big bike and it will help me for the 250 SX series next year.

#21 Jeremy Medaglia: I’m a smaller guy so it’s pretty tough to get traction to the rear wheel sometimes.

#105 Jimmy Decotis: I almost fell on both starts! I’m still in the hunt heading east. Yes, I knew how good Kaven and Jeremy are…Kaven beat Vince last year and he just went out and won the premiere class!

#1 Kaven Benoit: I found some good lines. The pit board told me what the lead was that I had. I’ve been together with Jerome (Therrien, his mechanic) for 6 years now. We’re best friends off the track. The lappers were tough. I just charged the whole moto and I’m happy with my race.

#123 Brett Metcalfe: You can’t get a good start form 35th gate pick. It was an uncontrolled part failure in the first moto (that took him out and forced a costly DNF).

#1 Colton Facciotti: I rode well in the 1st moto but I had a bad start. I need to be better in the first few laps. Metty had a few good lines. (I actually heard Colton and Cole talking about a few of Brett’s lines after the moto.) My main focus was to be consistent after coming into the season injured.

#148 Cole Thompson: It was clear I wasn’t the fastest guy. I just need to be in it every moto – that’s the plan. I made a few mistakes in the last couple laps.

#12 Vince Friese: All these guys are really good. There were 5 or 6 guys that were really pushing. I’m bummed with that fall in the 2nd moto. I’ll be back for Gopher Dunes. 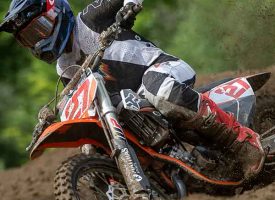