Round 1 of the Canada’s Motorcycle FXR Women’s East Nationals took place Saturday at Gopher Dunes. With 32 riders signed up to race the difficult track, it’s a good sign for the 3-round series that will hit Sand Del Lee and Ulverton next.

The weather is always a concern when you talk bout a mid-summer race on the tough sand track, but the ladies were spared the crushing heat and humidity on Saturday – it was a perfect day for motocross.

Going in, the question being asked was whether or not anyone could derail Duroy Racing KTM rider, defending champion Eve Brodeur. Here’s a look at some of the action.

For some reason, Cade Clason (left) and Nathan Bles were under the impression I was in charge of finding the 30-second dudes for the event and kept asking me questions. I didn’t have one single answer for them.

It all worked out in the end and they did a great job.

Nathan hamming it up for the camera.

If you were to ask the rest of the field what was the one thing they didn’t want to see happen, this was it. #1 Eve Brodeur got the holeshot and went on to win with an almost 40-second lead.

Bad news for #110 Breanna Rose: The Riverside Tavern Oneal Leatt rider flew off the edge of the 90-foot finish line table in the first moto and gave herself a concussion, bruised jaw, and a broken wrist.

#16 Wheelsport Decal Works Yamaha rider Krista Casselman rode to consistent 16-16 motos for 17th. Watch for her to move up a few positions next week at Sand Del Lee.

#156 Empey Tire SixSixOne Honda rider Erica Solmes had a rough first moto and came back to take 14th in the second. 18-14 put her 16th.

#75 Lindsay Bradley is one of the characters of the series. She too rode to consistent finishes on her MMRS Smith Asselstine’s Honda. 15-15 for 15th.

Duroy Racing KBS Motovan KTM rider #5 Alexandra Raymond has dug herself a bit of a hole heading into round 2. She ended up riding alone in the first moto. 9-10 for 10th.

#927 Robin Hutchinson got out to good starts that helped her to 10-7 finishes for 8th overall.

#4 Cassandra Belanger is fit and ready to race her Oakley Novik Lucie Brown Honda but when her bike was leaking fluid at the line she went out and was forced to nurse it around the track a bit. She came back for the second moto on a borrowed bike for 5-6 (7th) motos.

#887 Madison Seguin was in some great battles on her Braap Supply 100% KTM Saturday. She swapped places with Belanger for 6th.

#3 St. Laurant Radiology Lechey’s KTM FMX rider Abby Tardelli is a fun rider to watch. After a solid 3rd in the first moto, she went down in the first turn of the second and had to charge her way forward. She made it as far as 8th for 5th overall.

MX101 Canada’s Motorcycle FXR Yamaha rider #8 Allie Argue had great speed but fell a split second after this photo and had a hard time re-firing. She managed to get back up to 7th and then took a solid 3rd in the second for 4th. She’s fast at Sand Del Lee so that’s her best chance for a win in the series, for sure.

It wasn’t a hard fall but it still cost her a bunch of spots.

#79 Kassie Boone impresses everyone each time she races her W1P Momma K Racing Suzuki. Unfortunately, it doesn’t happen often enough. She was chasing Brodeur in the first before falling. 4-4 motos gave her 3rd and it might be the last time we see her this year.

The Most Improved Award has to go to #6 Laliberte Motosport Forma Family Honda’s Kim Normandin. She looked to have the pace to run with Eve out front. She moved forward quickly in both motos but it was too late to dice with Brodeur.

After spending time down south this past winter, #1 Eve Brodeur has gotten even faster. Someone will have to show the Duroy Racing Canada’s Motorcycle Oakley Answer KTM Canada rider a wheel if anyone wants to challenge her for this title. Her 1-1 motos were very impressive to watch.

Allie Argue’s 4th place gave her a $250 from Rekluse Canada.

At the time of the podium presentation, Madison Seguin was thought to be 5th and she got the $100 InnTeck prize. 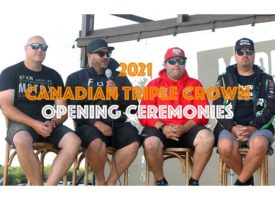 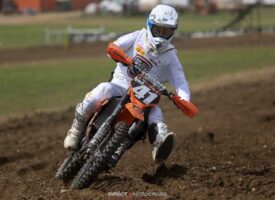