Cole Martinez will team up with 2013 MX1 champ Brett Metcalfe on the Monster Energy Thor Kawasaki team in 2015. – Bigwave photo

Although Cole Martinez has never actually lived in Canada or clicked on Direct Motocross (ouch!), he does, in fact, hold dual citizenship between the USA and Canada. He was born and raised in Arizona but his mother lives in Saskatchewan. We had all heard the rumours of the Monster Energy Thor Kawasaki team going after a rider who holds a Canadian passport, but it took a little digging for us to figure out who it was. Cole Martinez is the Lites rider for the team and will make his Canadian debut when the Rockstar Energy Drink MX Nationals get underway in late May at Whispering Pines in Kamloops, BC.

We gave the fast 22-year-old rider a call today and found him just finishing suspension testing out at Pala with Graeme Brough:

Direct Motocross: Hello, Cole. If you wouldn’t mind, can we back it way up here and could you tell us a little about yourself?

Cole Martinez: I’m actually from Arizona. My mom is from Saskatchewan. I have dual citizenship from both countries. [I’ve never lived in Saskatchewan] I’ve just gone and visited quite a bit. I never lived there full-time.

Have you been following the Canadian motocross scene at all?

Ya, I watched it last year and the year before when (Brett) Metcalfe won it. Last year, (Mike) Alessi and Vince Friese went up so I watched that whole series as well. Since I signed my deal and got everything going, I’ve been watching all the Canadian outdoors to kind of check out all the tracks.

I talked to Vince about [the rivalry between he and Kaven Benoit] and he said that there were some good battles. He didn’t really have anything bad to say.

How did the deal come together with the Monster Energy Thor Kawasaki team?

Hoodie and Frenchie (Luc Caouette). Hoodie talked to me about it during Supercross and I told him I had dual citizenship and that I was totally interested to try and work on a deal for me for the spring. Frenchie got a hold of me and it kind of took off from there and everything just fell into place really well.

Frenchie does the motors for the team I ride for for Supercross and I’ve been with DT1 Filters for a couple years and Hoodie has taken care of me. We have a pretty good relationship there as well.

Jason Hughes told me you were doing some testing today?

We were out at Pala today and we did a bunch of suspension testing. I saw [Graeme Brough] last year working with a few people during Supercross. We got our stuff pretty dialed.

How did your AMA outdoor season go last year?

I actually had a 13th place finish outdoors. I think it should have been a 9th but I slid out with 2 laps to go. I was a mud race. It was still a good finish for me. I mean, with how the season started it kind of made it all worth it, I guess.

Did you take the normal route through all the big American Nationals growing up?

Ya, I pretty much hit all the amateur nationals goring up and then I turned Pro and got hurt. I didn’t really race for a year-and-a-half. Last year was my first real full season of Pro stuff.

What are your thoughts and expectations heading into this summer in Canada?

I’d like to [end the Supercross season] with an 8th. That’s where I think I belong. It’s just going to take putting a whole race together. For Canada, I’m looking to continue the Kawi winning ways for the team. I know there’s some stiff competition up there but I’d really like to get some wins there. The goal is the championship, for sure.

I saw a few guys form the Rockstar Yamaha team out at Pala today. That was the first time I’ve ever seen anyone from the Lites class. I think it was Shawn Maffenbeier.

He’s a great guy AND he’s from Saskatchewan! You should really get to know him.

Kaven Benoit will be riding the 250 2-stroke. Any thoughts on that?

I think it’s a pretty good advantage. I mean, I think the 250 2-stroke is obviously faster. I’m not quite sure how they handle but I’m just going to go up there and look to be battling and hopefully get some race wins.

Well, thanks for taking the time to talk with us today. I’ll let you get going. See you at Round 1.

Thanks. It was good talking to you and I’m sure Ill see you this summer. See ya. 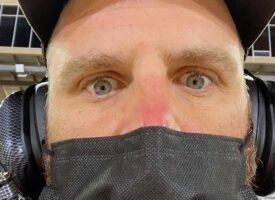