It was the final day of the 2015 ECAN at Deschambault MX in the small town on the north side of the St. Lawrence, some 60kms west of Quebec City. The weather was perfect for racing and it was the third and final motos of each class, except for the Supermini riders who will race as part of Sunday’s entertainment. Here are just a few shots from the day.

It was once again ‘The Eve Brodeur Show’ in the Women’s A class. Eve also competed in the Intermediate class and mentioned that she’d love to try to qualify for the Pro racing on a Sunday at some point.

Tanner Ward kwpt things interesting in the final Schoolboy 1 class by getting out to a lead and then tipping over in this very corner to start the last lap. Nobody was able to take advantage and Tanner took the win.

#29 Jeremy Pronovost was this week’s Frid’Eh Update poster boy and took the a class win today. He’s finished as high as 3rd in a Pro MX2 moto here, so watch for a solid day from him tomorrow.

Emilie-Jade Leveille heads out of the corner that now features a solid fence to cut down on people getting close enough to touch the riders.

Cameron Wrozyna looked fast in his races today and took a win.

I think I was most impressed with the speed and style Jeremy McKie showed in the Supermini class. This has to be one of his favourite tracks; he looked great.

He looked like he was having fun out front.

#38 Tim Tremblay made a liar out of us and showed up to race this weekend after telling us it was over for the season after injuring a finger at Gopher Dunes. He pulled in for some adjustments and still too the fastest class of the day.

The final moto of the day (MX3 Intermediate) ended up being the best as #213 Tommy Dallairde got out front early, then got passed by #456 JC Bujold, but managed to hold off the relentless pressure from #871 Gallant. It was a good one.

Mike Treadwell has shown up to race Sunday. Watch for his pre-gate-drop ritual on the line tomorrow and thank me later.

KTM handed out passes to every KTM rider at the track and hosted a delicious pasta dinner.

That’s Eve Brodeur and Kaven Benoit serving up the food.

There’s only 1 MX2 rider under the Leading Edge tent this weekend – the #134 of Cole Martinez.

What have we learned here? We learned never to leave your cameras unattended around a fun-loving pit like this one. Very nice, Craig. I wonder if he thought I’d really use this photo? See you at the races… 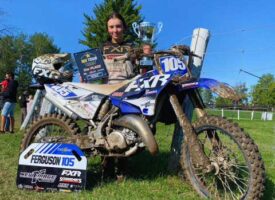 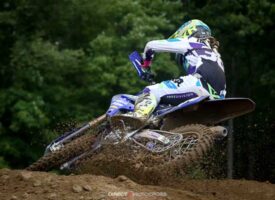