What a difference a week and a drive to the coast make! We went from record-setting heat last week in Kamloops to mid-teen coolness and overcast skies this week in Nanaimo, BC. I don’t think you’d get too many complaints from the riders, as they were able to go full bore the entire motos this week.

There were a few interesting stories from the Wastelands MX Park so let’s get to the photos and the racing action.

The Wastelands in Nanaimo, BC is one of only a couple concrete starting pads on the circuit. Dylan Kaelin’s 250 2-stroke sounded great burning rubber!

Racing jumped up and bit quite a few riders Sunday. #14 Jeremy Medaglia was one of the first casualties. A freshly watered track caused him to slide out and fall hard enough to break his helmet in the first moto. He decided to sit out the second. Hope you’re feeling better today, Jeremy.

When #177 broke a chain and stopped in the middle of a double jump, no flag was waved until it was too late. The result was a direct and unavoidable hit from Jess Pettis. Carson suffered some damage to his face and was fixed up at the hospital.

#115 Riley Heinrichs was hoping to bounce back after a tough first round in Kamloops. Unfortunately, things didn’t go his way and he’s scored a 34-DNF.

My apologies for not knowing who #171 was Sunday. After his very impressive 7th place first moto finish, I won’t forget Ryan Lalonde’s name any time soon!

After his impressive Kamloops round, 16-15 15th for McCoy Brough has got to be a bit of a let down. Watch for more high end rides from this young American rider.

#20 Jess Pettis set the fastest lap time in qualifying. Unfortunately, he was forced out of the first moto but came back for 4th in the second and snagged 13th overall to salvage some points. Oh, and how can we be missing letters in the ‘Wastelands’ sign for the National???

#17 Dylan Wright has the speed to win one of these things. He just needs some racing luck to come his way. He smashed into a downed Medaglia in the first and hurt his foot. He could barely put his boot on before the second but toughed out a 3rd place for 12th overall.

#69 Ryeley Gallup had a solid 12-12 day for 11th and will be looking forward to the Calgary round.

#24 Marcus Nilsen was in some tough battles for 8th in the first moto and then finished 13th in the second for 10th overall.

#53 Taylor Arsenault sat out last week due to concussion symptoms. He wasn’t sure how he’d feel at race pace in Nanaimo then went out and finished 11-9 9th!

Without support, #217 Casey Keast will not be heading east. With a 5th in the first moto, someone help get Casey to Ontario and beyond! 5-14 for 8th overall.

#101 Mark Worth is the replacement for injured Jacob Hayes. He got out to the early lead in moto 1 but then went down hard trying a banzai inside move on Cole Thompson in the ext corner. He needed a better start in the 2nd to finish up near the front. He came from last to 10th in the first and then took 5th in the 2nd for 6th.

We all knew who #70 was this week! Brandan Leith finished 4-8 for 4th overall.

#18 Brad Nauditt has his start mojo back and grabbed some Royal Distributing holeshot money again in Nanaimo. He raced his practice bike in the 2nd moto and finished 3-6 for 3rd.

#15 Shawn Maffenbeier enjoyed the red plates in Nanaimo and finished a very solid 2-2 for 2nd overall.

However, #4 Cole Thompson’s 1-1 motos gave him the overall and he’ll sport the red plates in Calgary.

#55 Vince Friese set fastest time in qualifying but then a fall took him out of action after he hit his head and sat out the remainder of the day. He’ll get checked out this week and hopes to return to Calgary where he took the win in 2015.

#11 Kaven Benoit was in the hunt for a podium in the first when he suffered a broken chain DNF. He bounced back and took 7th in the second for 17th.

Everyone was impressed with #73 Cody Matechuk’s 5th place in the first moto! Unfortunately, he decided to sit out the second after hurting his shoulder a while ago. He still took 16th overall.

#27 Shawn Robinson had troubles at the first round but came back strong for 15-11 finishes for 13th.

#5 Tyler Medaglia was feeling great and then had an ECU go on him in the first moto. He calmly stood in the mechanics’ area while Gibby ran and took the one from another bike. He got back out and managed to score points with a 19th. His solid 6th in moto 2 gave him 11th overall.

#21 Kyle Swanson will have graphics for Calgary and joked about his “mailbox numbers.” 8-13 for 10th after charging through the pack in the second moto.

#19 Morgan Burger charged alongside Swanson in the second and his strong 6th in the first gave him 9th overall (9-14).

There weren’t a lot of passes being made at the front, but #28 Keylan MEston and #6 Cade Clason had a moto-long battle. Keylan finished 9-9 for 7th.

#1 Matt Goerke was not happy about being docked 10 places after jumping on a red cross flag (go listen to his interview on the site). He finished 13-4 for 6th.

#6 Cade Clason finds himself up in 6th place after 4-8 motos put him 5th on the day.

#118 Davi Millsaps crossed the finish line first in both motos but his 10-place penalty for jumping on a red cross he says he didn’t see put him 4th (11-1).

#3 Brett Metcalfe got out front in both motos, collecting the Royal Distributing Triple Crown. His 3-3 motos put him 3rd.

#800 Mike Alessi won the first moto and then wasn’t happy with his decision not to make any changes before the 2nd moto. He finished 1-5 for 2nd overall.

#2 Colton Facciotti chased Millsaps around again in Nanaimo but his 2-2 motos gave him the overall and the red plates for Calgary. This battle should wage until we reach RJ’s in August!

Thanks for reading, and we’ll see you at the races… 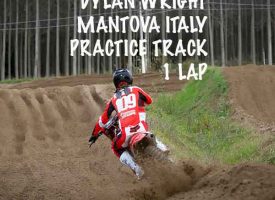 On the Radar: Quinn Amyotte 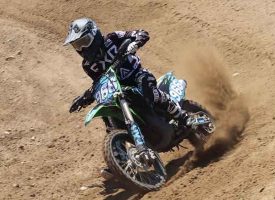