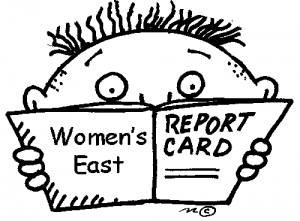 The Women’s East Nationals ran a 3-round series again in 2015 with rounds at Gopher Dunes, Sand Del Lee and Ulverton. Quebec rider, Eve Brodeur, defended her title in dominant fashion and the only blemish on her results sheet came when one of the best female motocrossers to ever ride a bike, Jessica ‘JP$’ Patterson, came up to race (and win) the Ulverton round.

Here is a look at the top 10 racers’ report cards. 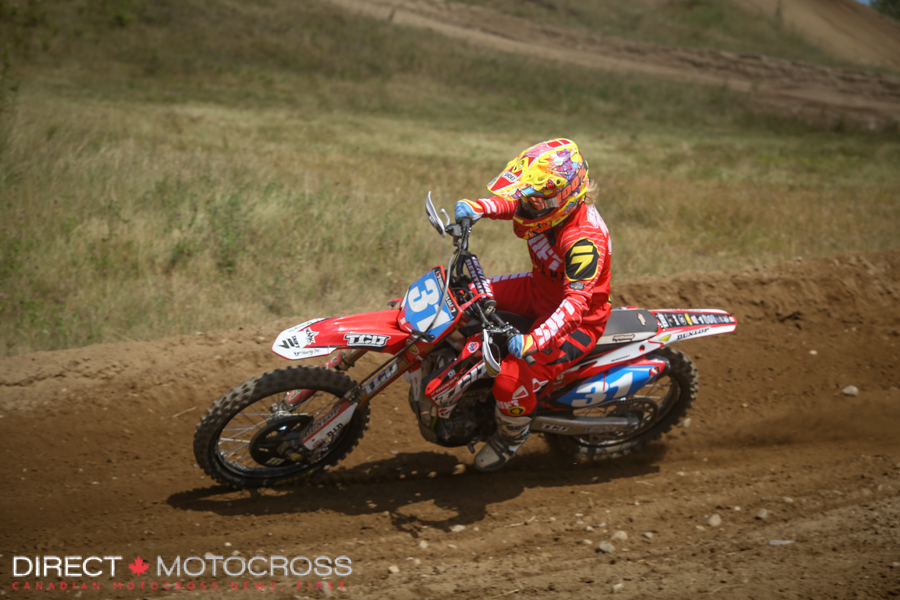 Heather rode strong all season long and had a solid season. Her speed was decent but her starts killed her. The back half of the pack is so much slower, you just can’t afford to have to pass though them every moto. With better starts, Heather would be in around the 7th or 8th position.

Heather is one of those riders who impressed me when I first saw her ride up here in Canada a couple years ago. I guess I just thought she would be battling for podiums eventually and that just never materialized. She’s a very competitive person and, I’m sure, hoped for the same.

She had a wedding to plan and so we’ll give her a bit of a break, but let’s see if she can get back to form for 2016, should she return for another kick at the can. 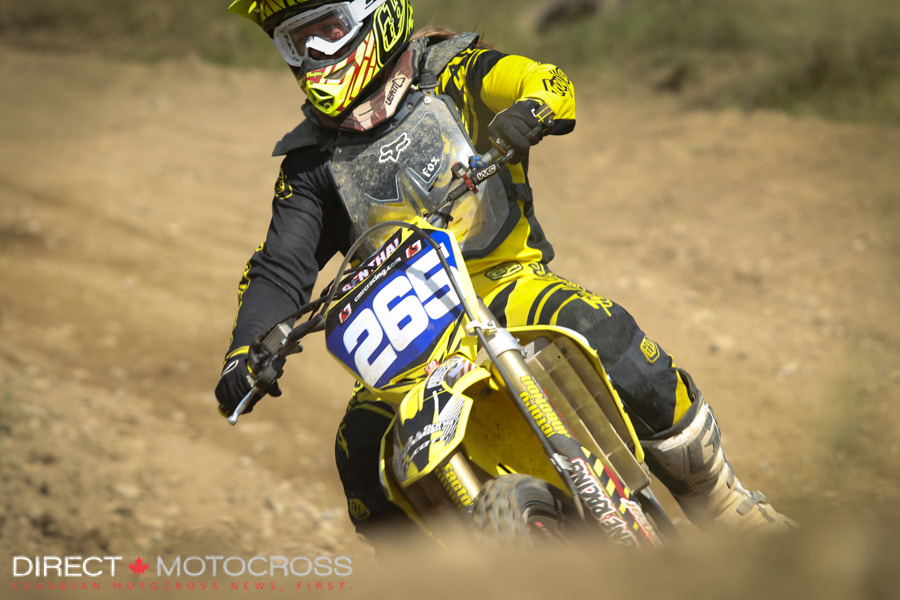 I’m giving Gagné a high mark, because she is a top tier rider. She showed up at round 2 and instantly got into the mix. She had to jump through many hurdles just to line up at Ulverton. It started with paying to have a bike shipped from Montana, then having a motor shipped over night, only to have it not arrive for the race, and then being forced to race her brother’s 450 with zero 450 experience ever. She looked really good on the 450 until she ate it pretty hard.

Brittany is an American rider who came up to Sand Del Lee and looked fast. She has the speed but just didn’t get the luck this summer. She came into the final round at Ulverton looking to challenge Eve for moto wins but when her plans got all screwed up, she was forced to race her brother’s 450 an then a hard crash took her out. A C is all I can give her, but if we were grading for effort she would receive an easy A from me.

I feel bad giving Allie such a low grade, but she has crashed out 2 years in a row. She has some serious speed, but really needs to control it more. The classic saying, “sometimes you need to slow down to go faster,” applies to Allie. She is still young, and with the great MX101 crew, she will figure it out soon.

I’m giving out a lot of C’s in this class. Allie had two solid rounds and then fell hard in a rather weird place in Ulverton. It took her out of competition and removed any hope of a top 3 number for 2016. Allie is a competitor and has the speed and support to finish up there. She’ll need some good starts and then try to run up with Eve to call 2016 a success.

After a rough first round at Gopher Dunes, Alexandra really impressed me with her speed at the last 2 rounds. She got decent starts and pushed all moto long. If she can figure out the Dunes, she will get a better grade. She also has some of the nicest looking gear combos out of the Ladies.

Although she dropped from #5 to #7, I’m giving Alexandra a B because I was impressed with the speed she showed. I didn’t think she had it in her, but she rode really well at the Walton TransCan and showed everyone that she really is a rider to be taken seriously and given respect in this class.

If she rides like she did in Walton next summer, she could surprise the rest of the field and drop her number substantially. 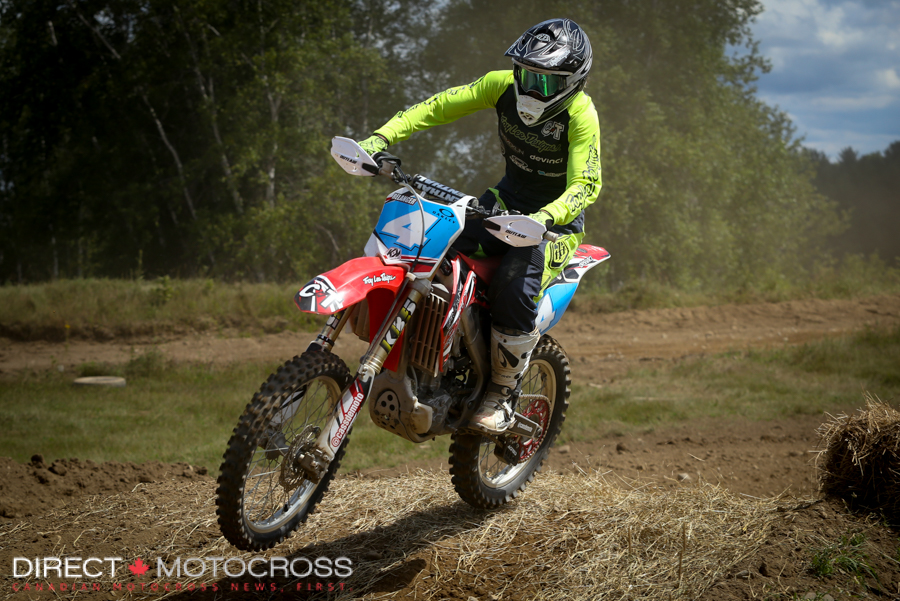 Cass had a hard time getting going in the motos. Her first lap or 2 hurt her. If she can figure out her starts and sprint for the first 2 laps, she will be inside the top 4 or 5. Her fitness will never be an issue.

I really thought Cassandra would have been closer to the front this summer. She still rode a consistent series but didn’t show me the speed she did in 2015. She managed to not have one of those really bad weekends and that’s what saved her from falling two places to 8th in the standings. The points were very close.

She is very fit and could finish much better in the standings, if she wants to. I think that might be the big question, right there – does she want to? If I’m wrong, she can prove it next summer.

Abby gets a B- from me, and it’s definitely not for lack of effort. She had terrible starts and was on the ground for most of them, but she never stopped charging hard. She has a great attitude and never gave up. In my opinion, she should be a 3-4 girl at worst.

Abby told me at the start of the season that she wanted to better her number for 2016. She was a little under-powered on her little 2-stroke and her poor starts reflected that. She spent her whole summer playing catch up, and that’s not going to win the title.

She will probably have to bite the 4-stroke bullet in 2016 if she wants to get back on the podium like she was in 2014. She usually passed more people than anyone else, but she still gets a C because, at her level, she shouldn’t have to. 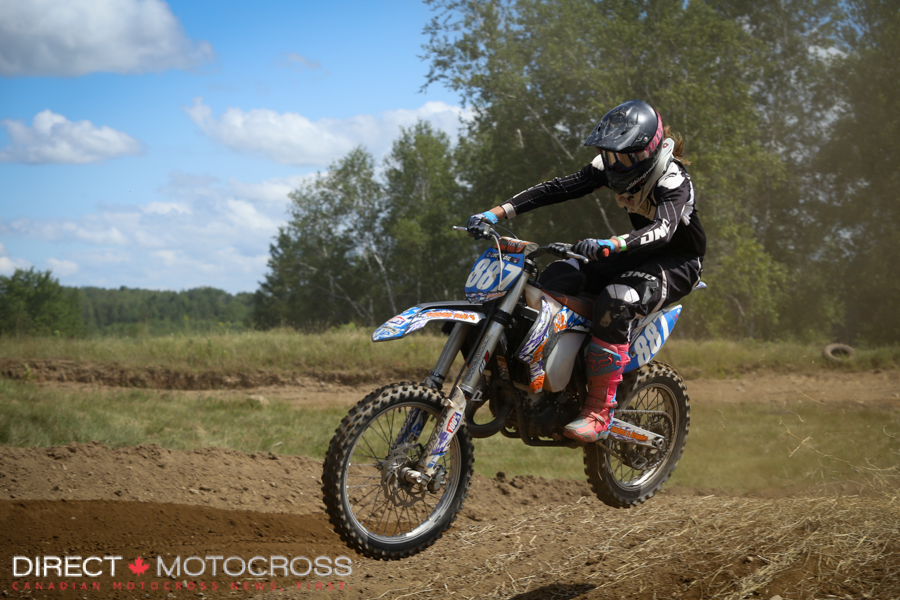 Madi didn’t have blazing speed, but she was consistent, and stayed on 2 wheels. With better starts, I think she could hang with the 4th-6th place girls with ease. Her father said she tested a 4-stroke and is quite a bit faster on it, so maybe that will help her next season.

Madison was that rider who was always right there but didn’t draw a lot of attention. Snagging 4th in the series should be enough to have us all expecting more consistent top finishes in 2016. She will need to find a little more speed and maybe move to the smoother power delivery of a 4-stroke if she wants that to happen, but she is a good rider and that should be well within her capabilities this winter.

Kassie gets an A- because she wasn’t expected to do more than 1 round and ended up finishing 3rd overall. She has fun when she rides and it really shows. Her fitness is holding her back, but for not training her butt off, she had one heck of a season.

Part of me feels Kassie deserves a lower score simply because she has more natural talent, arguably, than the rest of the field combined! With that skill, I feel that if she put her mind to it she could be a multi-time champion. The only thing stopping her from making that a reality is Kassie, herself.

In fact, I didn’t really think we’d see her in Ottawa, and certainly not in Ulverton, but we did and she took 3rd overall just by being there. Now, with a little more race drive, she could win a few of these things…but she’ll probably stick to ramp jumping, and that’s just fine because she’s really good at that, too.

Kim actually impressed me the most this season. She has a good style and charges all moto long. She led Brodeur in the 2nd moto at the MMRS Madoc National and looked very comfortable. She doesn’t have the speed of Eve, but she has everyone else covered.

I have to admit I didn’t see this one coming. Kim has shown speed before but nothing like I saw this summer. She has a good, solid style to build on and could show Eve a wheel in a bunch of motos next summer. If she gets the support she needs this winter, she could actually win this series. 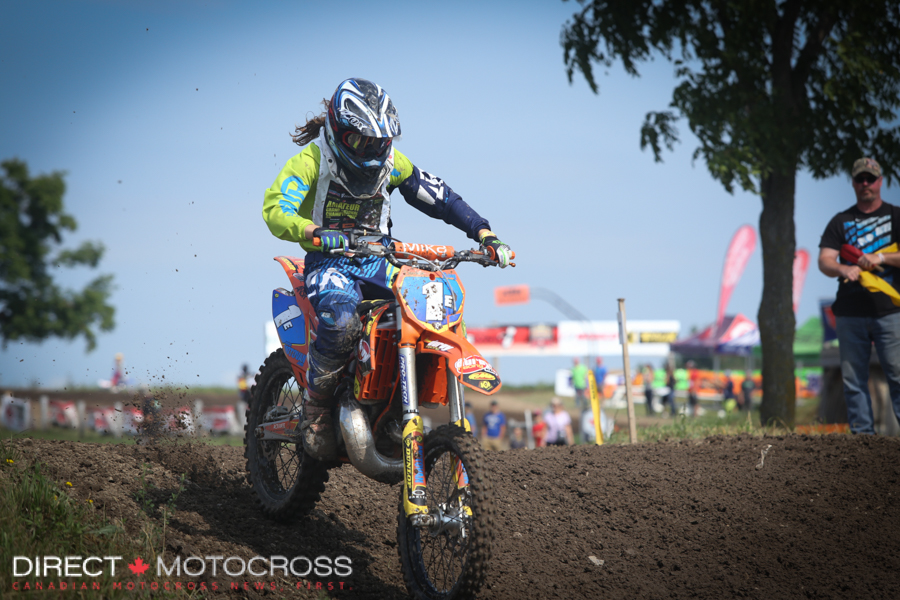 It’s pretty simple, Eve Brodeur is just that good at the young age of 15. She is not great at one thing, but she is very good at everything. The only thing that Eve has against her is lack of competition. The Brodeurs go looking for stiffer competition and welcome faster riders into the series with open arms. For 2016, Eve needs to be pushed a little more, as she may have slowed down a bit near the end of the season. The sky is the limit for this young lady, and I don’t she her letting up anytime soon.

It took the female G.O.A.T. to stop Eve from another perfect summer. Some might say that her loss to Jessica Patterson could remove the ‘+’ from her grade but I’m leaving it in there. Eve is clearly the fastest female rider still racing in the eastern series. It will take some pretty impressive improvements from any other rider to get up to her level in the near future.

Congratulations on another title, Eve. This title could be hers as long as she stays motivated and interested.

Enjoy your off-season, everyone. There shouldn’t have been any reason to hide this report card from your parents.

We’d also like to congratulate Leah Carke, Sylvain Brodeur, and everyone else involved in putting on another great series for the Women’s East Nationals. This series is getting done on hard work and sweat. I’m not sure how much longer they can run at this level and, hopefully, their hard work and great results have been noticed by a would-be title sponsor and these people don’t have to scramble to make this series a success again in 2016. A+ 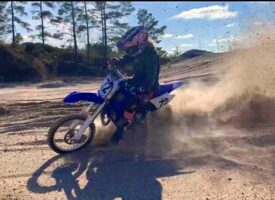 Out of the Blue | Emma Van Hezewijk | Presented by Schrader’s

Poll Question Results | Where Will Team Canada Finish at the 2016 MXON? 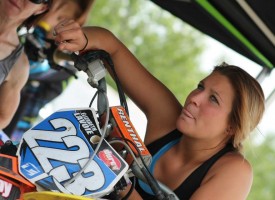