Between the round in Lommel and Sweden a lot has happened! History has been made, championship points have changed, and the 250 red plate has exchanged hands AGAIN.

Neither rider can afford any mistakes going into the last 3 rounds of the season. The championship can still go either way and if Vialle didn’t have the DNF due to his broken bike in Germany, he would still be leading the championship.

Vialle is looking to gain momentum this weekend in Finland and carry it into his home race in France at the next round.

It is going to be quite difficult for Vialle to gain 23 points on Geerts to regain the red plate and championship with just 3 rounds to go, considering how strong Geerts looked last weekend in Sweden.

Is it too late for Vialle or can he get it back?

Rounding out the MX2 podium last weekend in Sweden was factory Gas Gas rider #516 Simon Langenfelder who came off of a stellar ride in Lommel, Belgium to get third overall. With so much happening in the MX2 class it does not leave for much excitement in the MXGP class except the Factory Yamaha team continues to keep everyone hooked in the MXGP class.

Last weekend for the first time ever Factory Yamaha swept the MXGP moto 1 with #959 Maxime Renaux leading start to finish followed by his teammates #91 Jeremy Seewer and #259 Glenn Coldenhoff.

Unfortunately, Renaux got taken out in a gnarly first lap crash in moto 2 resulting in a DNF, but his teammates Seewer and Coldenhoff continued their great riding, taking 1st and 3rd overall on the day with Championship leader Honda HRC rider #243 Tim Gajser in second.

Seewer has finally found comfort on his bike riding great since France, but with 3 rounds left and Gajser ahead by over 90 points it would take some pretty dramatic events for Seewer to be able to catch him.

Never say never as in the sport of Motocross anything can happen, but Factory Yamaha is far from over this season. Let’s see if they can continue their strong streak going into Finland this weekend. Will we see them take a podium sweep in the last 3 rounds? 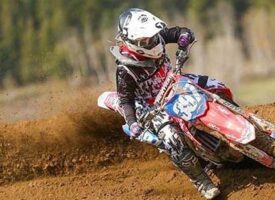 Out of the Blue | Melissa Legge | Presented by Schrader’s