This week’s coverage is brought to you by Freedom Cycle in Halifax, NS. Check ’em out!

Jeff gives us his McThoughts on Round 8 of the Rockstar MX Nationals in Moncton, NB.

This past weekend, Billy and I made the long drive to Moncton, New Brunswick. I was planning on skipping the race to get in some riding of my own, but I’m very glad Billy talked me out of it. After arriving late Saturday morning, I was worried about the track we were looking at – it was very one-lined, already dusty, and looked like it didn’t flow. But upon returning Sunday morning, the track crew had worked wonders and gave the guys a great track to race on. The rider turnout was a little weak, but that didn’t stop the fans from showing up. River Glade always has one of the best crowds of the season. We were blessed with great racing in both classes, so let’s take a look at the results and my thoughts.

1st Kaven Benoit (1-1): Even ‘number 2’ couldn’t stop the number 1 of Kaven Benoit. Benoit battled a stomach bug all day and he still came out on top.  This week he was forced to make some passes and that’s just what he did. He rode great all day and is a perfect 8 for 8 in moto wins on the East Coast. Kaven Benoit is just so hot right now!

2nd Jeremy Medaglia (3-2): Jeremy had 2 great rides in Moncton. His last 2 laps of moto 1 were a full seconds faster than anyone else. He will continue to fight for podiums and try to steal a win from Benoit before this season is over. He currently sits 3rd in points, just a mere 5 points behind Decotis. He will not let up until the final checkered flag at Walton.

3rd Shawn Maffenbeier (2-3): Shawn has really turned things around on the East Coast and looks very impressive. He was battling a shoulder injury early on, but there are no signs of it bothering him now. He too is looking to steal a win from Benoit, and Walton may be that place.

4th Cole Martinez (4-5): Cole is back from injury and looked really good on the hard packed dirt. His starts were on point, and he said he’s looking to win before the season is over. He will also be a threat at Walton.

Cole Martinez is feeling near 100% out there and it’s showing. – Bigwave photo

5th Jimmy Decotis (8-4): Jimmy had a bit of an off day. He wants to win for his team so bad, it almost looks like he is trying too hard. You can’t bag on a guy for giving too much, but maybe he needs to try the old ‘slow down to go faster?’

6th Brad Nauditt (7-6): Brad had two solid rides. He really needs to get his starts back and make things a little easier on himself. His bike sounded like a Nascar out there, so power shouldn’t be an issue.

7th Jesse Pettis (10-7): Jess has really looked solid the last two rounds. He looks like he has grown quite a bit and looks to be a lot stronger than he was in his early years. A top 5 wouldn’t surprise me out of Pettis.

Jess Pettis is riding great as the summer rolls along. – Bigwave photo

8th Marcus Nilsen (11-8): Marcus rode well in both motos. He needs better starts, but is doing really well for his first time up here racing our tracks.

9th Nathan Bles (9-10): Welcome back, Nathan Bles. Nathan made his return to racing after suffering a nasty arm injury just prior to round 1. For someone who hasn’t ridden a 250 2-stroke since the Junior class in 2009, Nathan looked pretty darn good. He’s a hard worker with tons of talent, and his results will get better each week.

10th Dustin Creson (12-9): Dustin looked good on the harder dirt. I like this guy’s style. I think he should be a top 10 guy every weekend.

Biggest Stud: My biggest stud goes to Bles and the Redemption Racing Team. They made the best out of a bad situation with Seth Rarick and the team parting ways. With very limited time, they were able to get two very solid results.

Biggest Dud: I don’t want to call this next guy my dud, so I will the situation my dud. Blake Savage was having a great ride in 2nd place and had a scary incident where he ended up in a mini pond / swamp. He told me after, that when he was under his bike in the water, that he was afraid he was going to drown. After getting his bike out of the drink, he rode his ass off to a 17th to salvage some points.

Biggest Surprise: I was surprised we didn’t have more entries. Where are all the fast Intermediates?

1st Colton Facciotti (1-2): Colton has been great the last few weeks in his first motos. He’s finally getting his fitness back, and still has an outside shot at this title. Let’s hope he can figure out his 2nd motos.

2nd Cole Thompson (2-3): Cole rode great on the harder dirt. It looked like he had the moto 1 win in the bag until he stalled his bike. He will be hard to bet against at Walton in 2 weeks.

3rd Matt Goerke (5-1): Wow! Goerke almost had disaster strike when the chain came off his bike in moto 1. But in true champion style, Matt made his bad race better than everyone else’s. I was very impressed that he was able to get his own chain back on and make it back up to 5th. He took the moto 2 win, and looked in control the entire time. I think we are looking at our 2015 MX1 Champion.

4th Tyler Medaglia (3-4): Tyler was on the gas all weekend. He had a rear brake issue in moto 2 where Cade Clason and Brett Metcalfe were able to get by him. Tyler never gave up and fought hard to get the 2 back for a very respectable 4th.

5th Cade Clason (4-6): Cade enjoys the hard pack dirt and it really showed Sunday. I  thought he had a podium in him this weekend. He battled hard with Metcalfe in moto 2 and I’m sure he learned a few things. I really like this guy, and think he will be on the box at Walton.

6th Davey Fraser (6-9): A career best finish overall for Fraser. He got good starts both motos and rode great. He ran out of steam late in moto 2, but hey…this guy works a real job through the week when he can. This guy is HAF!

Davey Fraser had his best-ever MX1 overall with a 6th. – Bigwave photo

7th Kyle Swanson (8-8): Swanson should have been on a 450 from day 1. The Devils Lake Yamaha fill in rider looks so smooth on the bigger bike. With a good off-season, Swanson could be a 5-8 guy on the 450 every weekend next year.

8th Drew Roberts (10-10): I’ve watched Drew since he was on 85’s, and this by far is his best ride. His starts have been awesome lately and he’s riding great. Now somebody please get this guy some graphics. He has definitely earned them.

Somebody hook Drew Roberts up with some graphics – he’s riding great! – Bigwave photo

9th Shawn Robinson (7-14): Shawn needs to finish the season strong and ride every moto like his first moto at River Glade. I expect Robinson to back up his 7th at Ulverton.

10th Kyle Keast (17-7): Keast rode to a 17th with a rear flat caused by a nail, then had a great 2nd moto for 7th. He’s been really coming on hard late in the motos like the Keast of old.

Biggest Stud: Goerke is my stud. He saved his championship by staying calm and smart when he had his chain issue in moto 1. He doesn’t need to win every moto, but he’s going to get at least 2 more before season’s end, in my opinion.

Are we looking at the 2015 MX1 champion here with Matt Goerke? – Bigwave photo

Biggest Dud: Only 29 riders signed up for MX1 – that’s embarrassing. This is a great facility with an incredible fan turn out, lets not lose it.

Biggest Surprise: Matthew Davenport had a great first moto going before he had goggle issues. There’s no reason why he shouldn’t be a regular in the top 10.

Thanks for reading and I’ll see you in Ulverton. 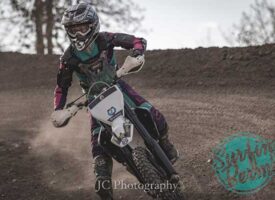 Out of the Blue | Lisa Cleverdon | Presented by Schrader’s 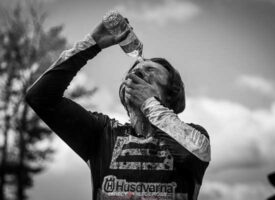 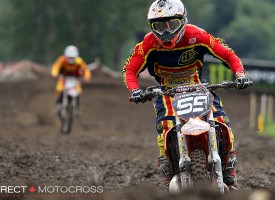