Whew, it’s one of those Monday mornings where I feel like I might as well have done two motos at Wild Rose MX Park in Calgary! At the end of a long weekend of racing, nothing feels as good as A) getting that finger in your nose as you leave the track (don’t pretend you don’t know what I’m talking about!) and B) just sitting down.

The older you get, the more those things the doctors told you “are going to give you trouble when you get older” start to…give you trouble. When you’re young, you never think that day is going to come but, sure enough, time passes (if you’re lucky) and you find yourself with a limp you never thought you’d have, a back you don’t remember feeling this bad after a night in a hotel bed that’s a little too soft, and knuckles that hurt because…wait, why the heck do my KNUckles hurt??!! All those ‘little’ crashes come back to get you in the long run. However, life is for living, so don’t slow down because you’re worried about old age.

Anyway, the Rockstar Energy MX Nationals rolled into Calgary like an ever-nearing storm cloud. They ran the track in the reverse direction with a whole bunch of changes. I know that when I spoke with past winners, Mike Alessi and Vince Friese, we joked that it was done to give our Canadian riders a chance. Unfortunately, a guy named Davi Millsaps didn’t get the memo.

The KTM Thor Racing rider appears to have this series in total lock-down. He can put the bike wherever he wants. Wait until the series comes closer to you and be sure to check it out. Like we joked at the track Sunday, this is why HE’S Davi Millsaps. I knew coming into the series that he should probably be the winner, but I never really thought he’d be this fast on our tracks. That was dumb. He’s somehow making it all look too easy.

On the other hand, defending champion, #1 Rockstar OTSFF Yamaha’s Matt Goerke is just looking for some luck to come his way. After being docked 10 positions last week in Nanaimo he was involved in a first-turn crash that had him charging from the back of the pack. He’s got the speed, now he needs the luck. If you listen to Jeff McConkey‘s interview from Sunday, you can hear the frustration in his voice.

His teammate, #3 Brett Metcalfe, obviously did some homework before Nanaimo and then crammed before Calgary because he looked much better and made the comment that he was now able to turn the bike the way he wanted. At this level, you don’t just go with the stock settings and go out and win motos. I may have mentioned this before, but we never even set the sag when I raced! I’m luck to be alive, not just limping!

I’ll tell you who is starting to take the same route as Marvin Musquin in the 450 class…Kaven Benoit. Kaven said before the second moto that he just wanted to get up front and try to run the pace of the top guys. Well, he snagged a nice holeshot in moto two and the rookie got his taste of the speed at the front. He looked very comfortable, too. I guess both he and Davi stalled their bikes, but, with the push of a button, little harm was done. After asking his what he did after Davi got past, he said he tried to learn some of his lines and stuck with him for an impressive amount of time. It won’t be long before we see Kaven on the podium.

#2 Honda Canada GDR Fox Racing rider, Colton Facciotti, came into Alberta with the points leader’s red plates. He had, for him, what looked like a rough day out on the track. 7-5 for 7th is not where you’d expect him to finish in at Wild Rose or anywhere else north of the border. He fell back in the first moto and his mechanic, Justin Petker, told me that he had stalled somewhere.

Anyway, we leave Calgary with the #118 in red again and it is going to take an amazing ride by someone to wrestle it out of Davi’s hands, he’s riding that good.

Like his KTM Thor Racing teammate, #4 Cole Thompson is starting to look very dominant in the MX2 class. Of course, we all knew that should be the case when we learned he’d be dropping to the 250 class, but it’s still impressive to watch. He won the second moto by 30 seconds on a very rough, rutted, and nasty track! Yes, #101 Monster Alpinestars Kawasaki rider Mark Worth and #70 Brandan Leith both fell during the moto, but Cole seems to be on another level.

Worth will be around for the rest of the summer, so watch for him to have days when he can show Cole a wheel, but I just don’t think he’s got Cole’s speed.

Leith will race Regina this coming weekend and then head home to Utah. Unless, that is, he gets some support to get him to the east. That’s right, the rider who sits 3rd overall in points isn’t going to be able to do the rest of the series without some more help. We spoke with him Sunday and he said he’d be willing to switch colours if it meant he could continue the series east. Anyone out there looking for a contender?

#15 Big Steel Box Fly Redemption Racing KTM rider, Shawn Maffenbeier, showed he has the speed and fitness to keep this title chase close. He stayed right with Cole in the first moto (he finished just 2 seconds off his rear wheel) and then had to come from outside the top 10 in the second to take final moto. His battle with Worth and Leith was probably the most exciting on the track, that moto. The most important thing is that Shawn knows his lap times where right there with Cole’s so he’s got the confidence to keep going for wins. It should be a great series.

The MX101 FXR Yamaha duo of #17 Dylan Wright and #20 Jess Pettis seem to finish together regardless of how they start. They were joking about it in their pits. Dylan’s 4-7 and Jess’s 7-6 put them 5th and 6th. They’ve both shown the speed to win motos so watch for them to keep pressuring the podium each week.

#18 SG Powersports Scott Honda rider, Brad Nauditt, kept things exciting by needing a motos swap before the motos. It was really cool to see GDR’s Derek Schuster and Adam Turner jump right in and help get Brad’s bike ready for racing. Canadian racing at its finest, right there! Brad’s 10-5 put him back in 8th for the day, but he still finds himself 4th in points. Brad is another rider we find who may not be heading east. Let’s hope that changes.

OK, I’ll save some other stories for the photo report…wait, I will also mention that Honda Canada GDR Fox Racing’s ace 250 rider, #14 Jeremy Medaglia, was sidelined this week due to the effects of his crash in Nanaimo. He’s still feeling the results of hitting his head and will not rush his return until he is 100%. He’s a rider that understands the importance of recovery, so it’s still up in the air if we’ll see him back on the track in Regina…maybe Gopher Dunes. Hope you’re feeling better soon, Jeremy.

And so it’s time to get Jeff to the airport for his flight back to Toronto. It was great having him out here for this round. I’m sure if you were at home following the racing on Twitter, you were also thankful for Jeff’s visit to Calgary. Have a safe flight, Jeff, and we’ll see you at Gopher Dunes in a few weeks.

And with that, we leave the mountains in our rear view mirrors and head east. Thanks for reading, have a great week, and we’ll see you in Regina. 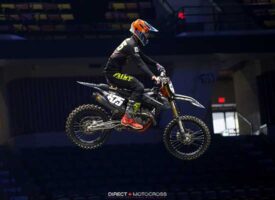