Growing up, my dad always had bikes and he loved it, so finally my mom made him purchase dirt bikes for my sister and me.  We would all go trail riding almost every other weekend. After a year or so in the trails a friend mentioned a dirt bike track in Richmond, Ontario, called Sand Del Lee and this is where my racing began.

As a little girl, did you ever expect to be this deep into a sport like motocross?
As a little girl, no, I never thought about a sport like motocross. I was a typical girl just loving dance class and gymnastics. Even when I got my first bike riding wasn’t my first option. It wasn’t until I was 14 when I really started getting into the sport. And ever since then I’ve been hooked!

This is a tough one. Motocross is a male-dominated sport for sure but females are slowly gaining more and more respect in this sport. We definitely don’t have the same amount of coverage or support but we are slowly getting there. The only thing that I can think of that makes it harder would be the lack of class options for us females. Although it isn’t a problem for me, other girls might not want to line up beside 4o other guys, so they are stuck with only racing in the ladies class.
Who is your favourite rider and why?
My favourite rider would have to be Ken Roczen without a doubt. He is a very passionate and determined rider. And of course his looks are a bonus too!

For me I would have to say Vicki Golden. She is such an inspiration for being such a determined rider by everything she does, like going out and trying to be the first female to qualify for Supercross.

Samantha is inspired by what Vicki Golden is trying to accomplish this season in Supercross. – Bigwave photo

I would definitely have to say Tyler Medaglia. He is very aggressive but at the same time he is a safe rider. He is also probably the most approachable guy off the track.

Favourite track – well, that’s a hard one! But the first one to come to mind would definitely be the Bomber Track from Durhamtown Plantation Sportsman’s Resort in Georgia. It’s a fast track that develops some really nice ruts and has an awesome rhythm section.

I would have to say my parents.  They are super-supportive on and off the track and always encourage me to have fun no matter what the outcome of a race may be. Especially my dad, we enjoy battling it out on the track and pushing each other to go faster.

Next season I hope to do all rounds of the Women’s (East) Nationals. As well as compete in the MX101 Iron Man Series and a round of the MMRS Series.

My biggest accomplishments would have to be finishing top 3 in Ladies for the past 3 years in the MX101 Ironman Series. As well finishing 1st overall in Ladies A for the 2014 MMRS 6-Foot-Trophy Series.

Samantha lists winning the MMRS 6-Foot-Trophy Series in 2014 as one of her biggest accomplishments. – Bigwave photo

My favourite part about going to the races would be getting to see everyone again. I consider the race track as a second home! It’s great to share such a passion with so many amazing people. There truly is no family like motocross family.

Well, in the summertime I enjoy spending time with friends, shopping, working out, and going to the beach. When winter hits, that’s a whole different story. If I am not hibernating I have convinced my dad to take us south. Or my new winter activity would be snowboarding although I am not that good at it, especially not at getting off the chair lift.

To be honest, I am quite happy that my boyfriend Caden isn’t a motocross racer. He knows that this is what I am passionate about and that it is my time to just be by myself and do my own thing. But it’s great having him be so supportive and always asking how my riding is going and of course traveling around to all the races with me.
If you ever have children, will they be motocross racers?

I find that my dad and I have such a close relationship from both being involved and loving the same sport. So, I would absolutely love for my children to want to be involved in the sport as well, but in the end the choice is entirely theirs.

I would like to give the biggest thanks to my family for all the time, money and effort they put into motocross. None of this would be possible without them. I’d also like to thank Jim Kolman from Wheelsport for everything he has done for me. 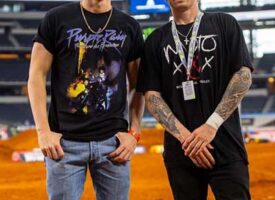 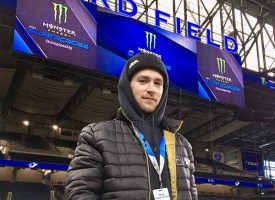