After leaving Atlanta Sunday morning after Round 8 of the Monster Energy AMA Supercross Series, I headed south to GPF where a bunch of Canadians are calling home. What that meant for me was that I didn’t really have any time to go through my photos from the races and am just now taking a breather to have a look.

By now, we all know who won what, so I won’t bore you with a bunch of photos with riders’ placings as captions. I’ll combine my usual ‘Faces at the Races’ with some shots from the actual racing but try to put a slightly different spin on things.

We’ll start with a shot of the Georgia Dome track in the daytime. They are feverishly building a new stadium right beside this one, so our days are numbered in this facility.

I like this one of Chad and Ellie Reed.

Ryan Dungey watching the replay of that last lap pass while speaking with Fox Sports.

Does this ever get old?

“Hey, remember that time I missed the Joker Lane?!”

Coming up a little short…

I don’t know how much they showed on TV but Reed kept the front two honest.

Davi Millsaps and Justin Brayton had a sold battle going for quite a few laps.

Yes, I signed the waiver.

James Stewart got off to a decent start but kept it safe and finished 14th.

Once 250 3rd place finisher Aaron Plessinger got the cap off, he pretty much soaked one of the photogs.

It took him forever to get the cap off. The photographer should have known.

Hugs for the winner.

Hugs for the winner.

He actually made that look pretty easy.

Justin Hill was not happy with himself when this happened.

He got it sorted out quickly.

Clint Bowyer getting some face time after the holeshot challenge.

Safe to say, he went for it.

Some say Stackhouse was the real winner…

I didn’t even know these two had issues the week before, but they found each other again in Atlanta.

Mike Alessi with the fender slap after his early win.

#142 Josh Bartosh got the holeshot and then the heat was red flagged. He couldn’t repeat his great start and then went down. He could not have been happy with the way that all went.

Josh Cartwright has raced in Canada before.

This corner looked a little too much like an outdoor national.

Wil Hahn’s impact with the ground left him with a broken right collarbone.

Andrew Short and Phil Nicoletti were the other two involved in the ugly crash.

It was just this kind of night for Ryan Dungey.

I really enjoyed the wall. I don’t think #195 Keaton Ward would say the same on this lap.

#63 Jesse Wentland had some troubles after getting together with #66 Arnaud Tonus.

Tonus could win a few of these things.

Could this be the year?

Yes, we all stood in this corner a lot.

#30 Shane McElrath will be much better this week.

Be sure to cheer for this Canadian when the series gets to Toronto in 2 weeks.

#423 Vicki Golden needed about 5 seconds to make the night show.

#512 Andrew Silverstein is a guy to watch during the day. He has a blast out there.

With a good week on the 250, he should be in the night show this week.

Fellow Canadian Karl Normand is helping Blanchet out. He has an injury and isn’t riding at the moment.

We joked about this this band’s music. Let’s just say it’s not my thing.

Kyle Cunningham raced is racing 450 in the east.

#761 Cade Clason was just off the pace in Atlanta.

#55 Vince Friese trying n inside line on the wall.

You had to blast your way through this sandy corner and then pick a deep rut in the face of the next jump.

Not as easy as these guys make it look.

Tomac smashing his way through.

After this turn, some riders were scrubbing speed on the next jump. I got hit in the head so hard with roost that it almost knocked me down.

James wasn’t aiming for this line. He actually got tweaked awkwardly about 2 feet behind where he is now. It looked like it hurt.

One more podium next week and he is tied for most consecutive. Does Chad Reed go for the take-out?

There was a lot of this Saturday afternoon in this sand section.

This is the scrub move that caused my headache.

What colour is Matt Bisceglia’s bike?

I didn’t see who did it first, but they were jumping halfway up the dragon’s back before the sand section in the mains.

Even after his frustrating loss, Marvin kept his cool.

This is his 40th year flagging.

I think Dakota Alix’s bike was the only one with stock graphics.

Hampshire getting wayyy back.

I can’t believe a guy with Henry Miller’s talent might only get to Daytona because he has little-to-no support.

The sand section was a bit of a rodeo Saturday.

Anyone have a witty caption for this one?

Like I always say, stand over Simon Cudby’s shoulder and you’re bound to get the good shots.

Shane McElrath with the holeshot award.

Malcolm was NOT happy after the race.

I saw Dirt Shark in the right place at the right time a lot Saturday. Go find his video from Atlanta.

Silverstein was all over the place, having fun and falling down.

I wasn’t having much luck during the night show, so I tried the flash…

Marshall Weltin has raced in Canada. He qualified 17th and then got out 5th in the main but had troubles and finished 15th.

So, if you’re ever home on a Saturday afternoon, click on the Pro Bowling Tour and you just might see our old friend from MXPTV, Matt Wozney. Yes, he’s becoming a serious bowler.

Ray hitting the wall in his Canadian FXR gear.

I hope there’s a wall at every round from now on.

Marvin was very mad at himself when he fell after the sand pit.

Now, if that’s not textbook style, I don’t know what is.

Ryan Dungey getting way out front.

Eli getting roosted on the wall.

Seely picking his rut and going with it.

Martin getting his own roost.

Almost everyone took a turn in the sand.

A new clutch for Trey.

Hamming it up at the K1 rig.

Jeff trying to get artsy in the pits.

Blake Baggett was at the race but not on the bike.

Nick Wey’s ride all ready for his return.

Getting a little off-centre.

Nicoletti in the pits.

I think Darryn Durham lives in his parents’ basement.

Adam Enticknap is still a couple months away from riding but he was in Atlanta.

Putting some hot air to the boots.

I think everyone was impressed with Durham’s ride. He started 2nd and finished 7th.

Jason Anderson was feeling good in the morning.

A couple of French guys chilling in Atlanta.

Young Hannah Hodges walking the track. Will she be making main events in the future?

Can Durham back up his solid day this week in Daytona?

Steve Matthes trying to figure out what all this Zen stuff Nathan Ramsey is talking about.

“Ya, ya, Justin, but did you see this sand section over here?!”

Jenny Taft does her homework in the morning.

Jenny getting some background on Justin Hill.

JJ with none other than Sebastien Tortelli.

Sorry, Eli, but it was just too good not to use.

James at the riders’ meeting.

Karl Normand and Dave’s better half.

Jenny with some questions for Tyler.

Robby Feder getting Vince’s bike ready for the day. 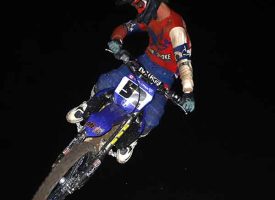 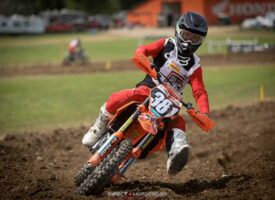 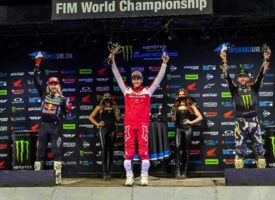 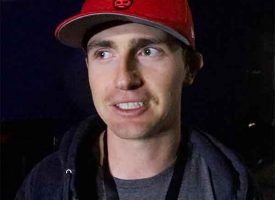 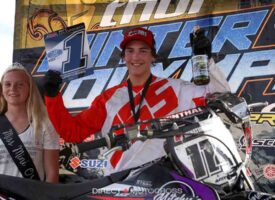