When we posted a photo of #22 Kyle Beaton on Instagram winning the 2008 CMRC Motocross National at Sand Del Lee, it prompted a comment from fellow competitor, #9 Ryan Lockhart. Ryan alluded to a story he says he tells “10-12 times a year,” so we had to get to the bottom of it.

We got in touch with Ryan and asked if he wouldn’t mind recounting this tale for all to enjoy, and he agreed. Here’s the story behind the 2008 photo:

Here’s the ‘Story Behind the Photo.’ | Bigwave photo

So, here is the story to the day at MX101. It’s actually pretty short.

Leading up to the ’08 season, I decided to drop down to the MX2 class because, in my mind, I knew I could fight for podiums and maybe even win. I did a pre-season race at Sand Del Lee and have always liked that track and really looked forward to that round of the nationals. My season, up until that point, was just OK – my starts sucked on the little bike and I would always fight through the pack and end up 5th-8th at most rounds.

The track conditions at SDL that day were the exact same as the pre-season race I did – wet and deep – so I was pretty confident. I had Norcal (Jeff Northrop) prepping goggles for me and helping me with gate choice etc., since he was hurt and not racing.

The first moto, I started 2nd behind Beaton and within the first few laps both of us were gone. I kept saying to myself, “Just keep him in sight and he will either throw it away or his bike will break.” Yes I know…not the nicest thoughts to think about one of your good buddies, but Beats had a lot of speed that year but anytime he looked to have a moto win something would happen.

Well, not this day. Beats would ride a perfect day and go 1-1 and I ended up going 2-4 for 4th overall. Like come on, who goes 2-4 for 4th??? I was pissed and that 2nd place in moto 1 would be my last ever national podium which, if it was any other day, could possibly have been a moto win (HAHA).

Kyle and I are great friends and I bring the SDL day up often after a few beers and I always end the conversation angry. Also, my good buddy Eric Nye, who won the championship that year and who smoked me all season, was so pissed after moto one that I got 2nd. He will deny it, but I’m positive the dirty looks he was giving me meant something. He went 4-2 and was happy to push me off the podium overall (HAHA). 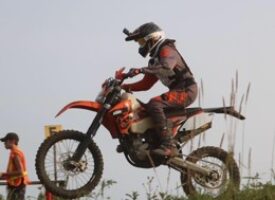