One of the many cool things about working in the moto industry is getting the opportunity to ride brand new bikes when they become available. There was a time when every brand would bring out their new line-up and the media would get the chance to ride them all back to back to compare. That was back in the ‘Shootout’ days. These days, riding the new bikes is more of a fun day learning what’s new on one particular brand of bikes.

When Matt Fletcher from Yamaha Motor Canada invited Direct Motocross to come up to Motopark to ride the new line-up of Yamaha Off-Road bikes, I jumped at the chance. The question was, besides me and Dawn McClintock, who were we going to get to ride the bikes?

Even though the majority of people who buy bikes are not Pros, people always want to read what they think of the new bikes. It took me about 1 second to come up with the perfect choice to put the new Yamaha’s through their paces at the top level. If you’ve been to a Pro national in the past few years, you’ve noticed a rider who just seems to be having a little more fun than anyone else all the while going at top-level speed.

Waterford, Ontario’s Halden Halstead is the rider who came with us to Chatsworth, Ontario, to ride all the bikes. Hayden has always been a FODMX (Friend of DMX). He’s fast, friendly, and fun – the 3 F’s. He’s also a Yamaha rider so he would be able to compare the new rides to what he’s used to. Perfect. 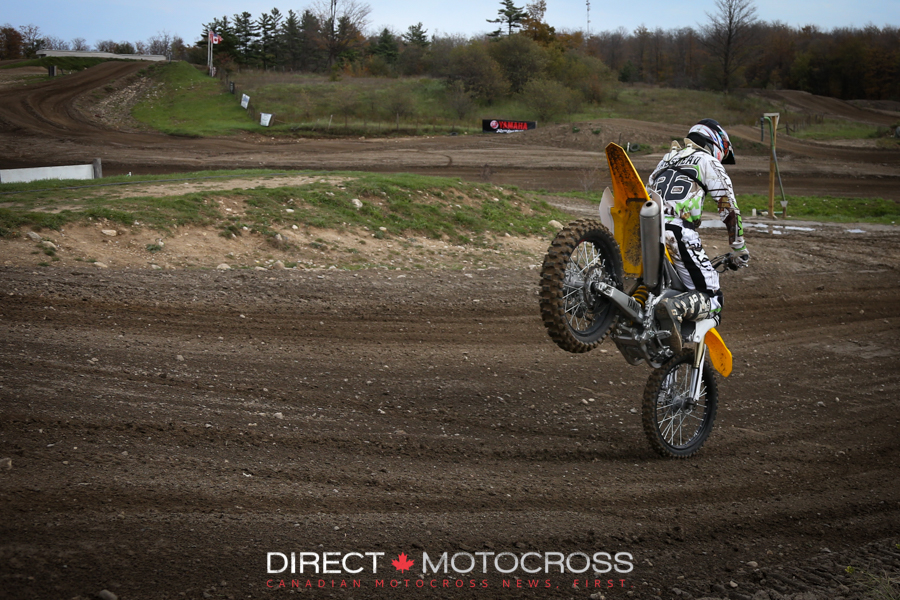 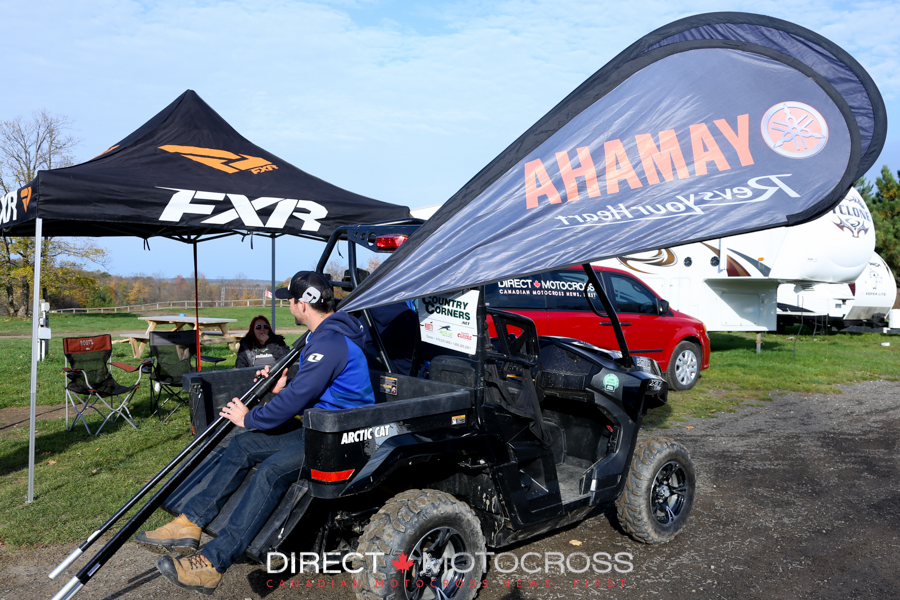 Hayden even grabbed a hammer and helped the Yamaha guys drive banner pegs into the ground! – Bigwave photo 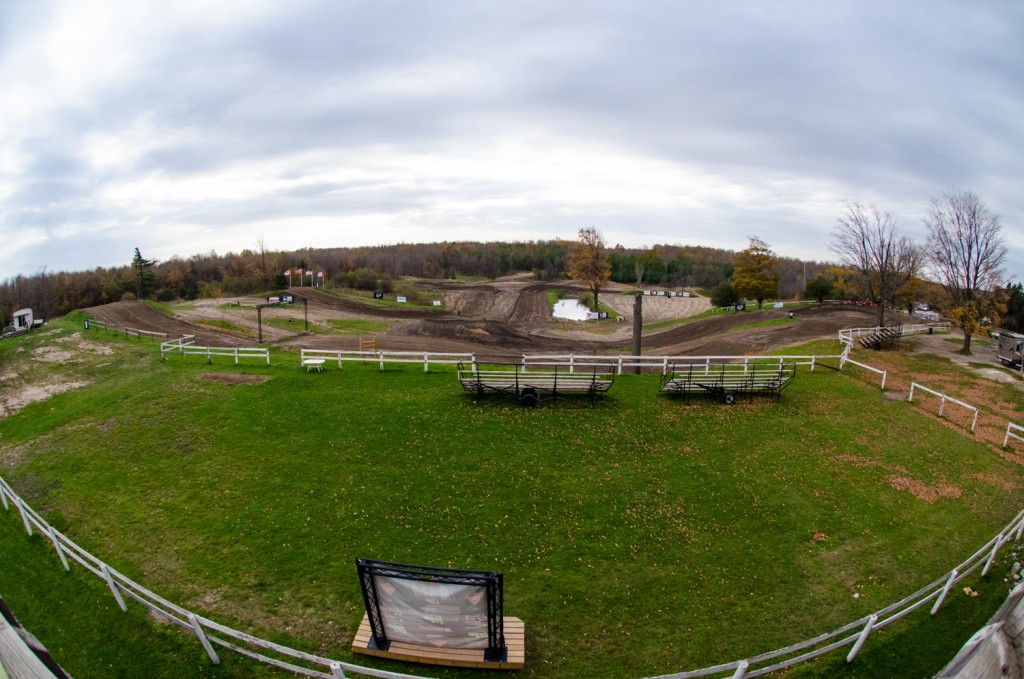 The Motopark crew had the track in absolutely perfect condition. – Allison Kennedy photo 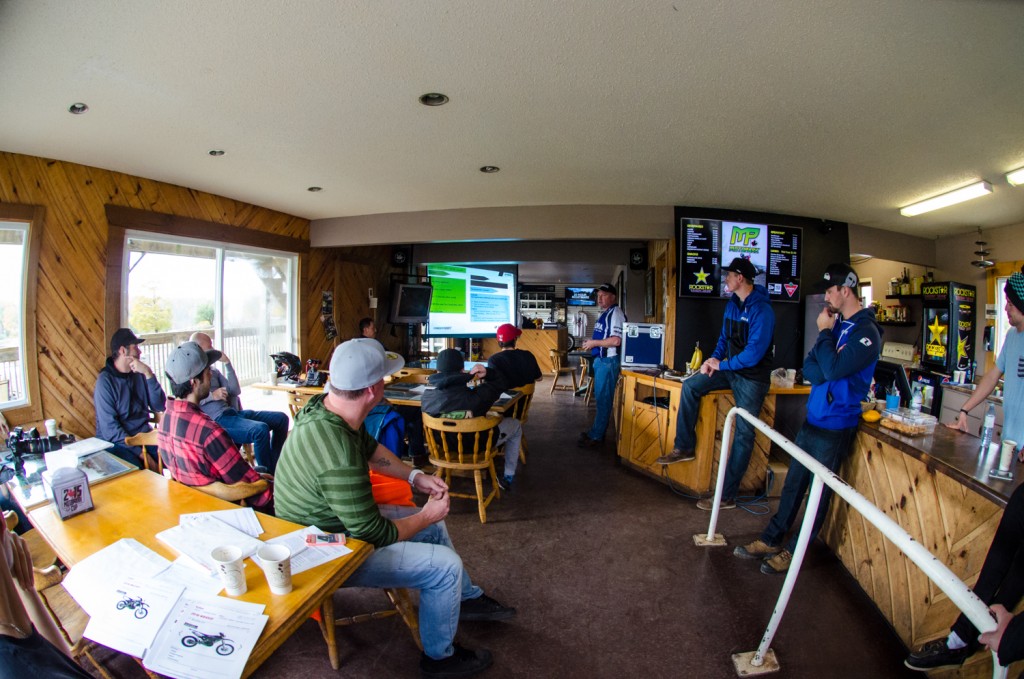 We gathered in the Moto Café for a brief PK on what the new rides were all about. – Allison Kennedy photo 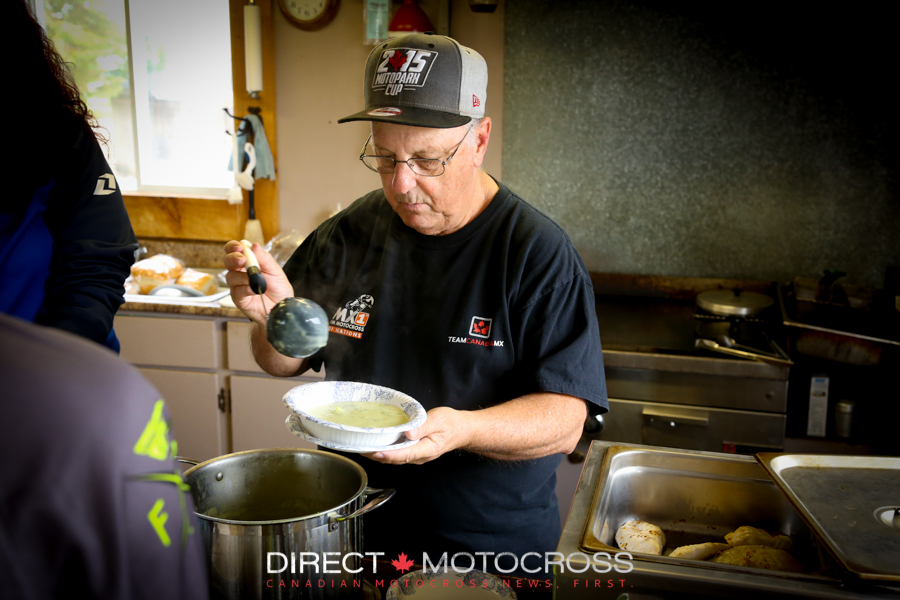 Whats the first thing you do when you get to Motopark? Well, usually it’s get a Moto Muffin from Carl Bastedo, but it was late so soup and a chicken burger was the call. – Bigwave photo 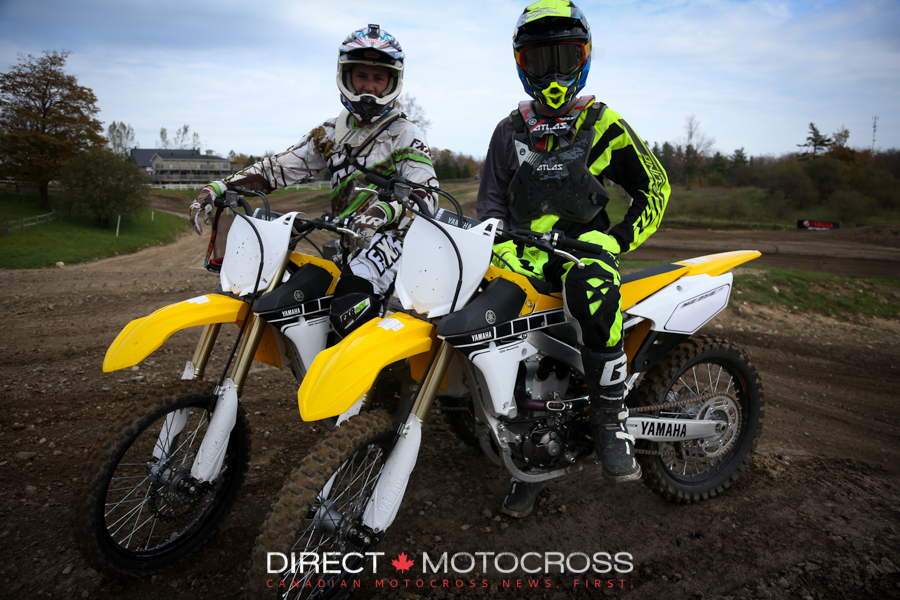 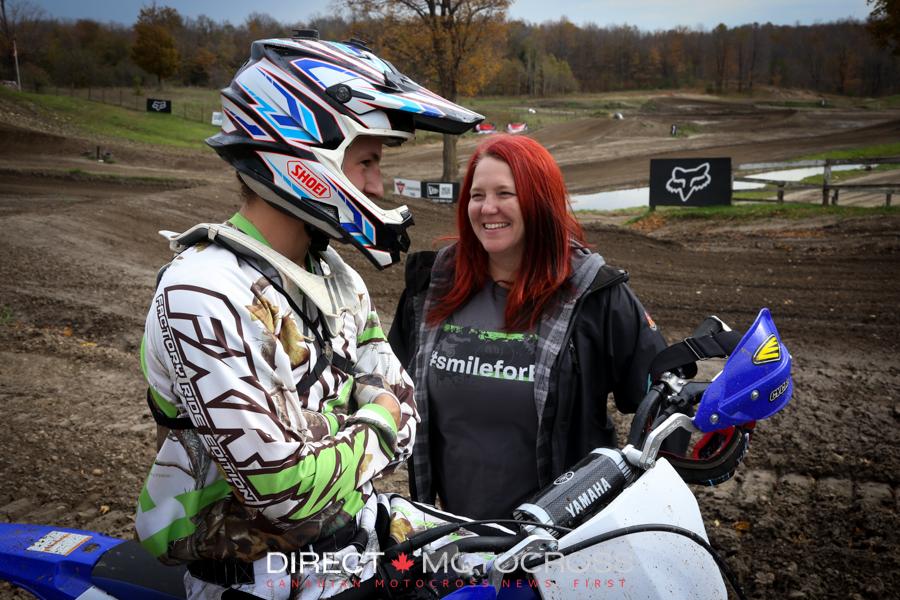 Dawn McClintock came along to say hello to her old friend, Allison Kennedy, who was there taking the ‘official’ shots for Yamaha Motor Canada. If they’d had a 125 on site, Dawn would have put in a ton of laps. – Bigwave photo 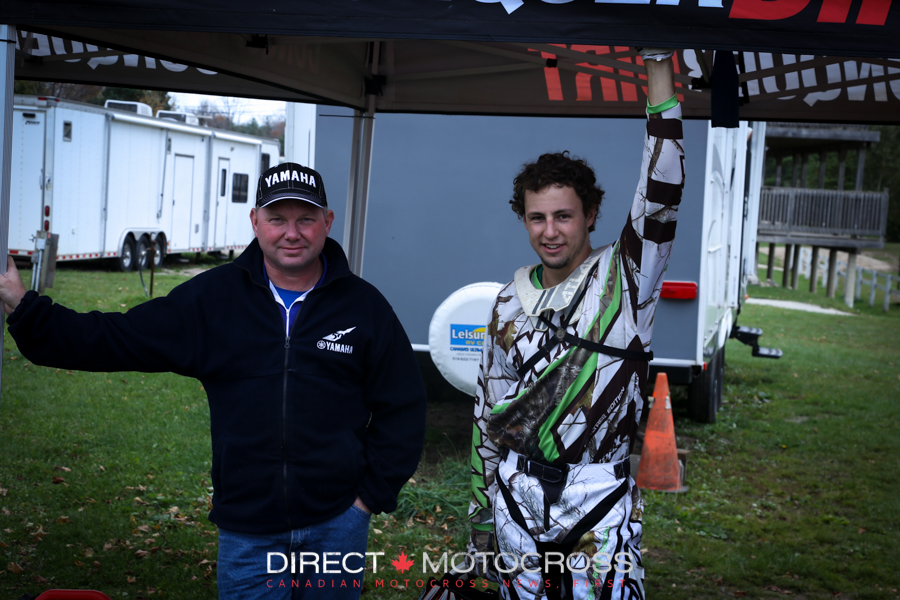 Hayden with long-time Yamaha Canada’s Rick Lewis. Thanks to Rick for making sure I had a trail of bread crumbs to find my way back from the woods course! – Bigwave photo 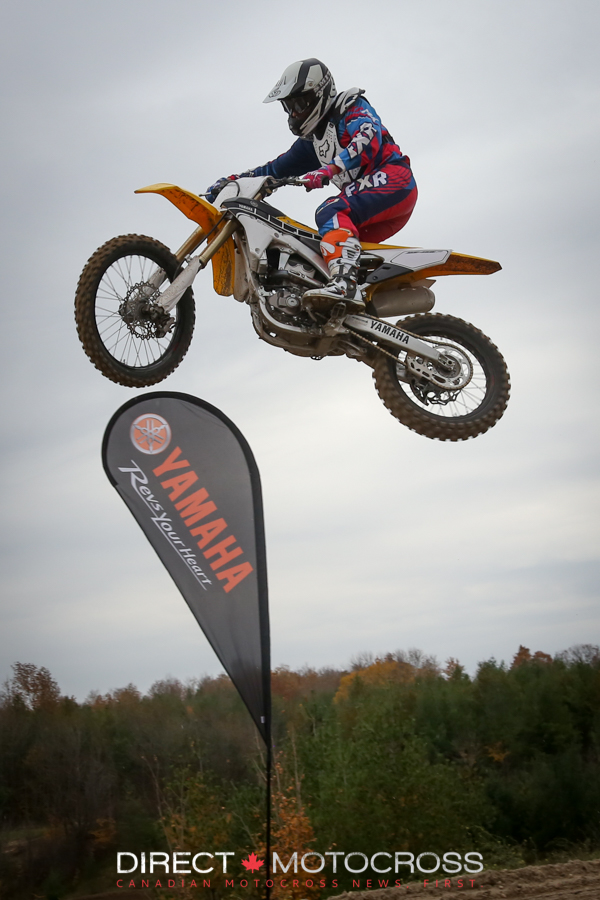 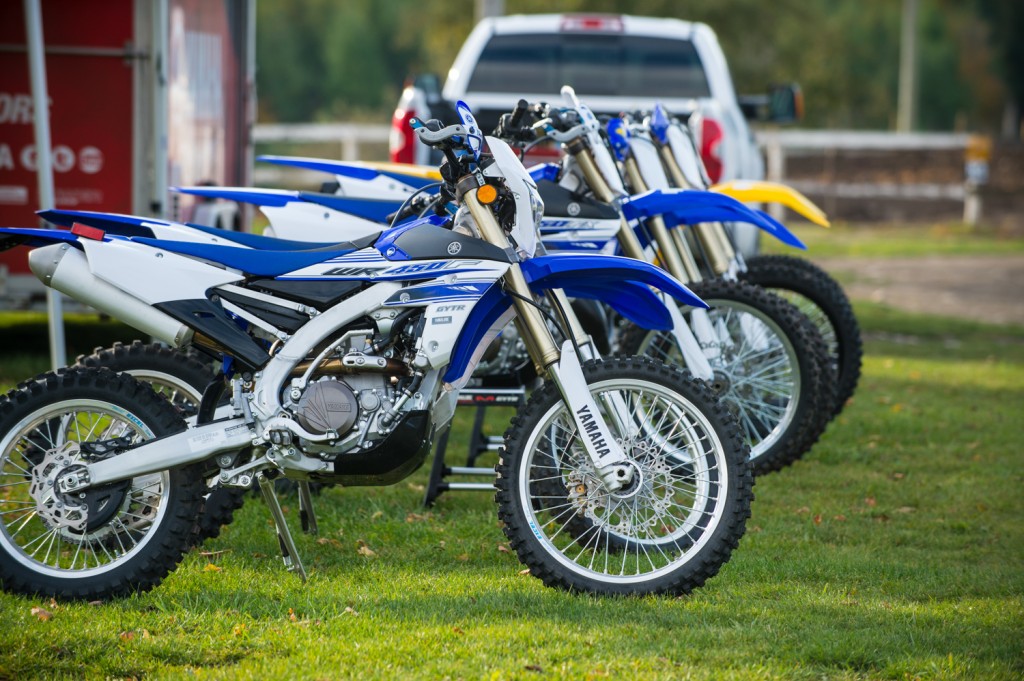 This was my first time riding a WR. This bike was pretty fun and even more fun when Marco Cannella and I started battling it out on them! “The Great Headlight Battle,” I think all the kids called it. It was a pretty wild race with lots of bar banging and giant whips. We both made quick work of Stewart and Carmichael then I passed him while back flipping and the rest was history. Well, at least it seemed like that all happened in our minds! The bikes felt just like the YZF just with a nice quiet pipe, slightly toned down motors and a bit softer suspension. I found the best thing was that the motor wasn’t too slow and the suspension wasn’t too soft. Not only was it fun riding off-road and in the woods, it held up well on the moto track as well. I felt like a street legal WR 450 would be super-cool to own, ripping on the road, shredding some trails and slaying the moto track all while coming home from work. 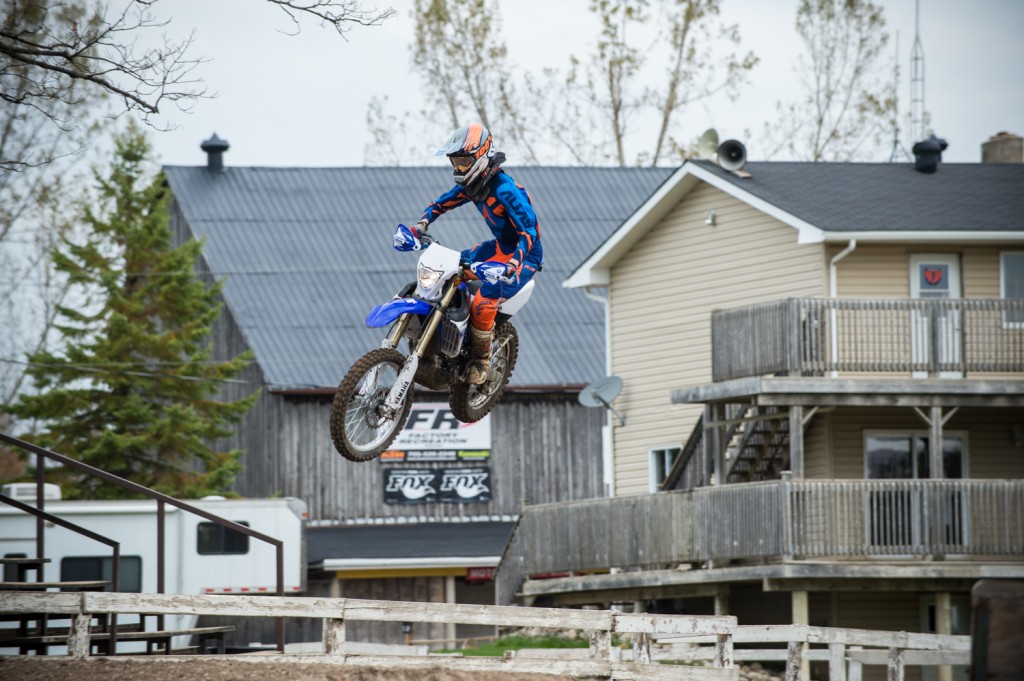 Nick Denniston airing out the WR on the motocross track. – Allison Kennedy photo

When I jumped on the smaller WR, I immediately noticed the smooth delivery of power. I rode this bike first and did two laps of the motocross track on it. It was quiet and didn’t hit very hard off the bottom. It would obviously not win an Intermediate moto on an mx track, but that’s now where it’s supposed to shine.

This was the only bike I took through the woods and it paid off right away. I’ve only ever ridden a motocross bike on trails and it became apparent why the two disciplines require different set-ups. Even at my laboured pace, I was unable to stall this thing! Seriously, last time in the trails I rode a big 450 mx bike above Kamloops, BC, I spent most of my time re-firing the big beast. Not so with the WR 250. Although it would be a stretch to say I love enduro riding, this bike made it so I could almost enjoy banging bars off trees and fighting my way up wet, rocky climbs. I said almost.

Watching Jeff Morgan and Pat disappear into the trails ahead of me, it became obvious just how different these two aspects of off-road riding are. All I know is that I would probably still be out there cursing if I wasn’t on the WR. 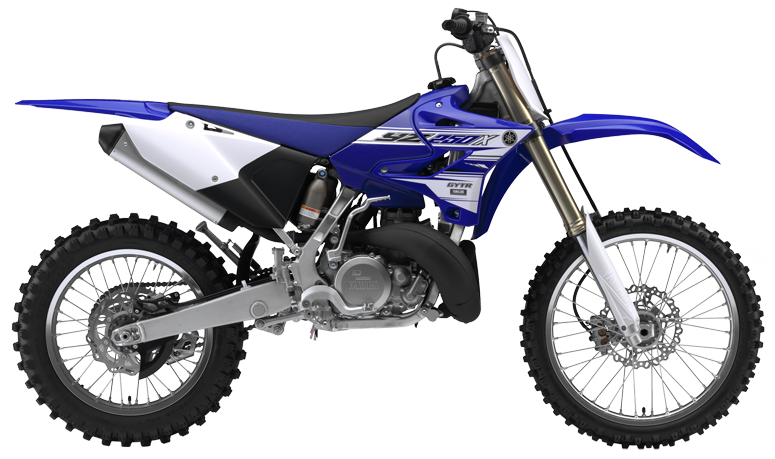 I sure am glad I rode this bike. It had been sitting in the line-up all day probably yelling at me to ride it as I ignored it thinking it was just an ordinary YZ 250 with an 18 inch rear wheel. Was I ever wrong and pleasantly surprised. I am no stranger to the YZ 250 as I raced MX2 nationals for two years on them and had 295hrs on my last YZ 250 practice bike.

I took the YZX into the bush at Motopark first and quickly realized that the power delivery was much smoother but didn’t feel any slower than the YZ. The bike turned and rode like any other YZ 250 with the suspension a little softer than but absolutely perfect for me (165lbs) on and off the moto track.

The motor was clearly the main focus during development and they sure did a good job. It was so smooth and torquey but came out of corners with minimal wheel spin. It had a nice torquey snap when doing trials stuff and wheelies. This bike was so much fun and felt ready to ride for any genre of riding. I absolutely loved it!

The new 2016 YZ250X is based on the current YZ250 2-stroke with the following additional features that enhance its competitiveness for cross country or enduro type racing / riding. 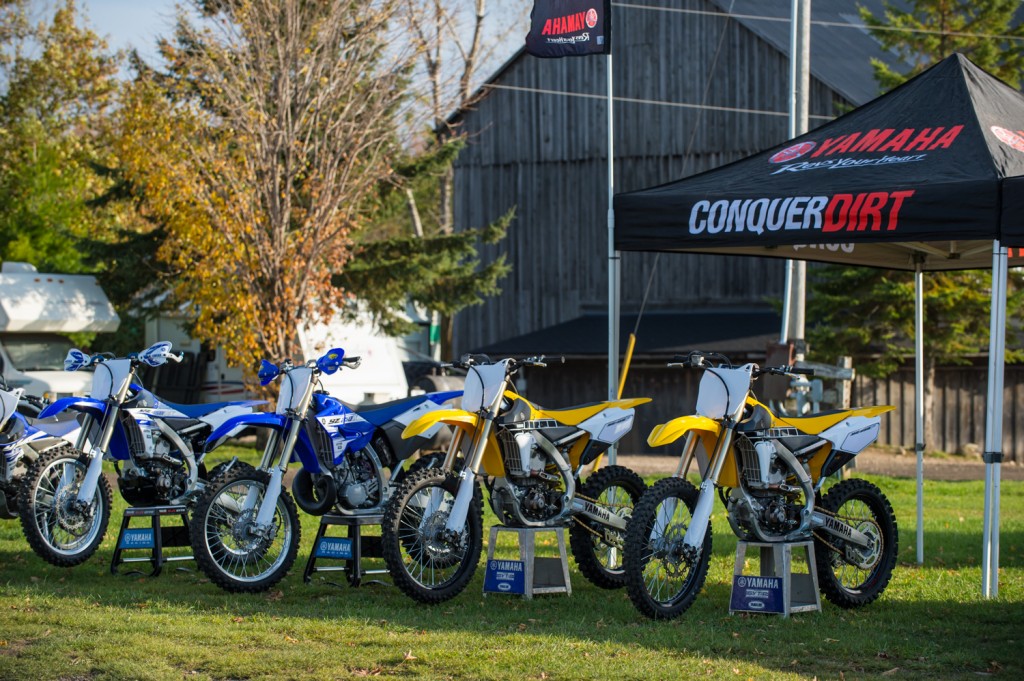 These 250 were fast! I can’t get over how they sound. It reminded me of a few years back at Walton when Darryn Durham came up to ride his super-modded out Honda. I remember that bike had such a crazy high pitch, high revving sound just like the new stock YZF 250’s. I strongly believe Yamaha has their bikes figured out with the reverse motor and all the other new jazz. It seems like for 2016 there where a few minor changes that are the cherry on top of an already great 2015 line-up of bikes.

Other than the 450, I spent the most time on this bike and I really enjoyed all the 250 aspects of it: how it brakes, turns and how light they feel, but it is pretty bad-ass how nice and smooth these things pull out of corners. There isn’t much else to say other than if you are planning on buying a new bike make sure you give one of the YZF’s a ride and I’m sure you will realize why I enjoyed them so much!

Their have been a few discussions between my parents and me about riding a YZF250 in this upcoming season. I feel like it would be pretty fun dicing it up back in MX2. I guess we will see what happens… 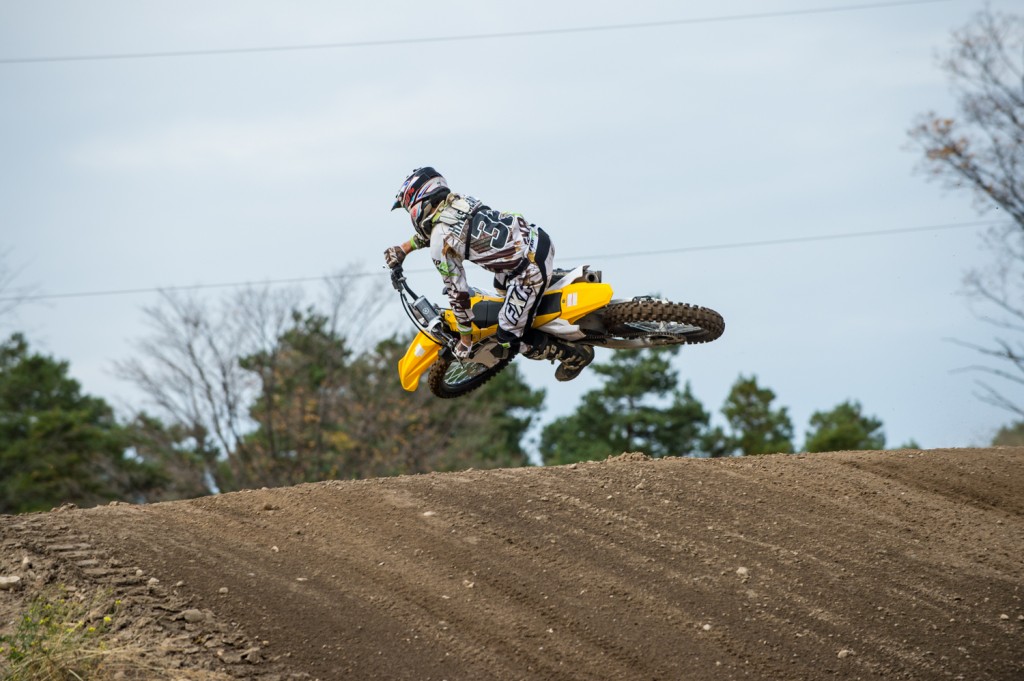 Hayden spent most of his time ripping up the mx track on the YZ 250F and 450F. – Allison Kennedy photo

I had only put in 3 laps on a motocross track in the past year-and-a-half (surely, you remember my MMRS Legends class win from 2014!), but found myself getting more and more comfortable on the YZF250 as the day went on. This was the bike I put in the most laps on. I would have stayed out all day on this bike if I could have.

I found myself able to do jumps I didn’t feel comfortable attempting before. I’ll tell you what, Motopark is a really fun track when you actually do all the jumps! Well, I guess I didn’t do #4 but it certainly was no fault of the YZ250F! I don’t want to turn this into a 2-stroke vs. 4-stroke thing, but, man, the Yamaha 250F is easy to ride (relatively) fast. I found myself able to cut inside in the corners or ‘rail’ the berms, whichever my out-of-control corner entry saw fit.

In the air, I was able to raise or lower the front end at will and some of the jumps just out of the corners weren’t an issue like I usually find them to be at Motopark – no ‘air high-siding.’ I loved this bike. 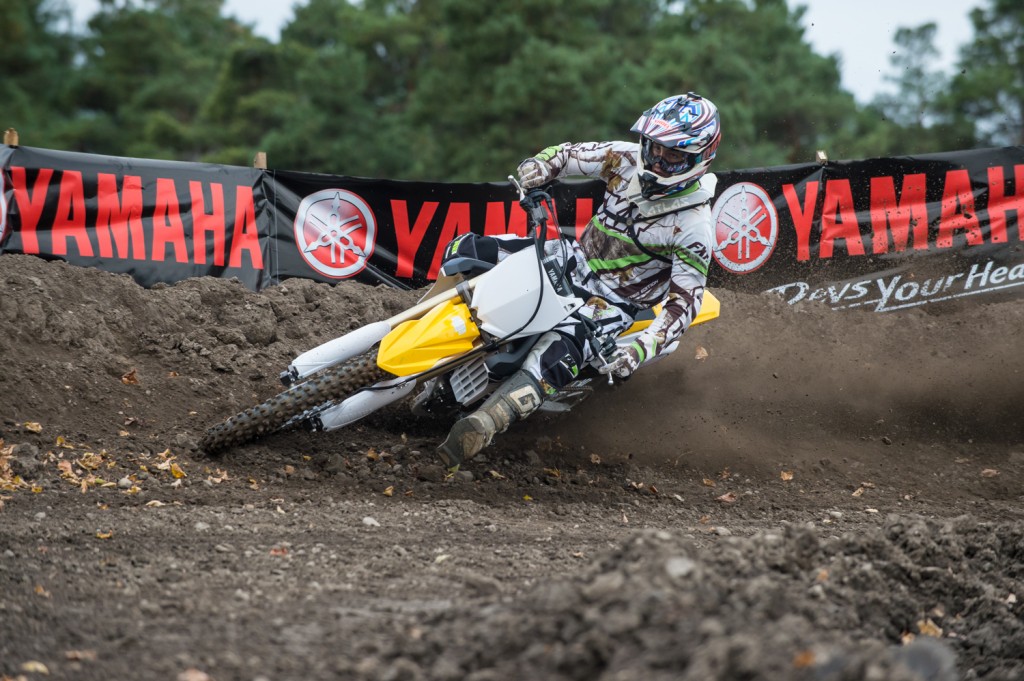 Well,well,well, the YZF 450’s to me are so dreamy! I put some serious time in riding the 2016 450 Yamaha had there; I didn’t want get off it! They made a couple changes with the swingarm, triple clamp offset and spring rates. The 2016 felt quite a lot like my 2015’s that are stock expect for some sweet SSS suspension and other personal settings.

The 2016 YZF 450 had the best stock suspension I have ever ridden. The motor seemed to be a little bit snappier but somehow still was smooth and didn’t rip your arms off! That’s probably my favourite thing about the Yamaha 450: it is so fast but yet so gentle! I also can’t get over how nimble these big horsepower monsters are. I tell my dad all the time it feels like my YZF 450 scrubs jumps by itself, it is that easy! 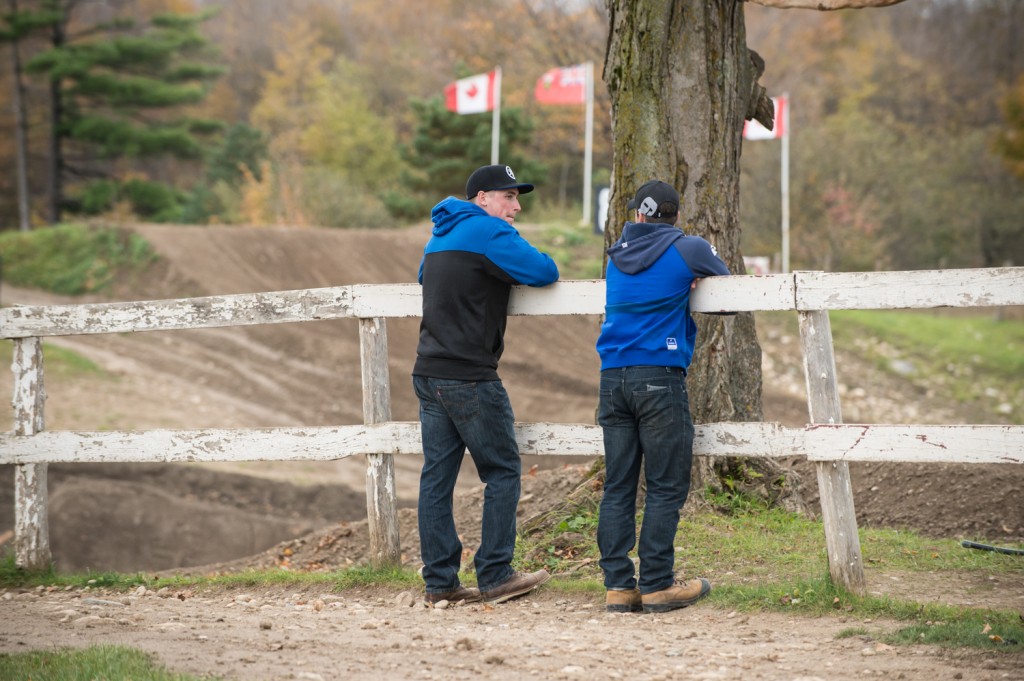 The two Matts, Matt Fletcher (left) and Matt Both, watching us all have a blast on the new Yamahas. – Allison Kennedy photo 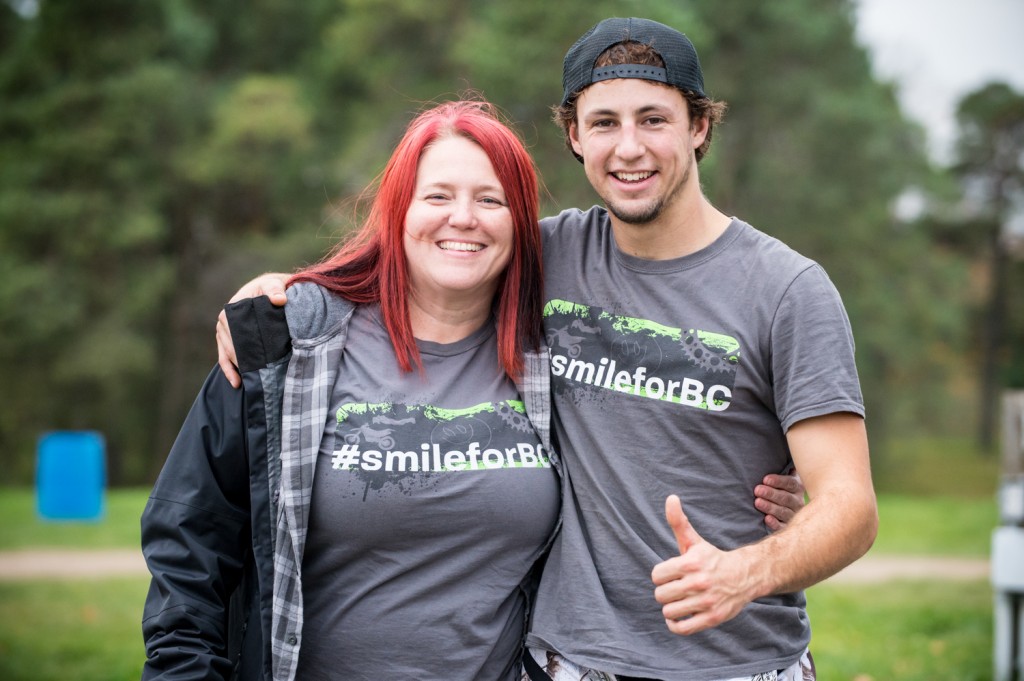 Everyone was all smiles at the end of a great day at Motopark. – Allison Kennedy photo 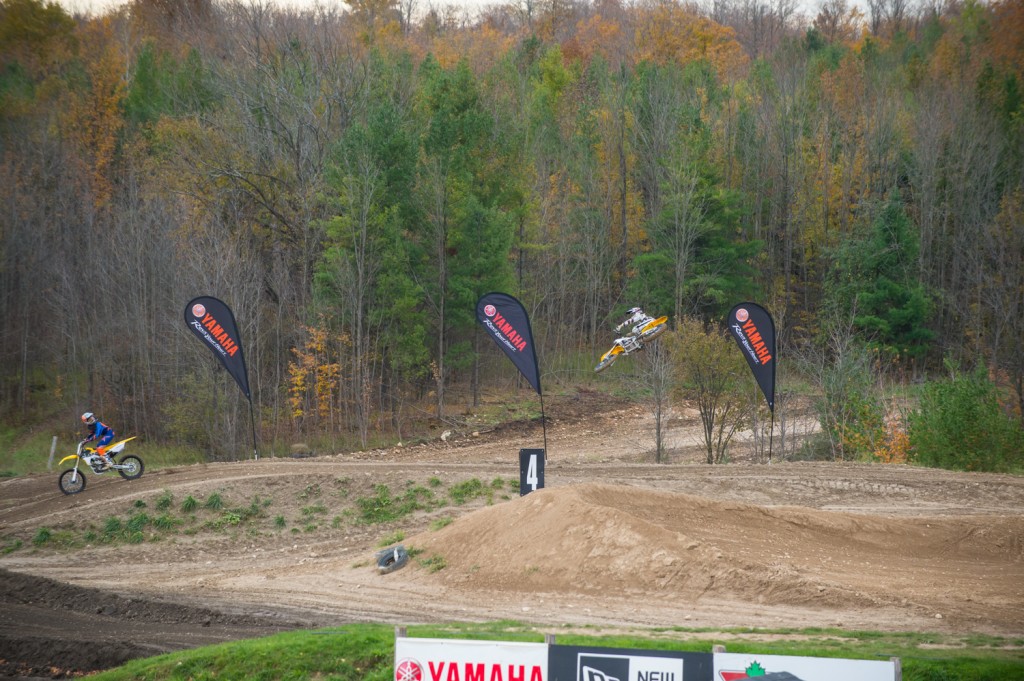 The highlight, for me, was watching rising star, Nick Denniston, try to stay out front of a charging Hayden Halstead. A lot of riders would have just pulled off as a Pro closed in, but Nick kept pushing and forced Hayden to make the pass. Well done, Nick. – Allison Kennedy photo 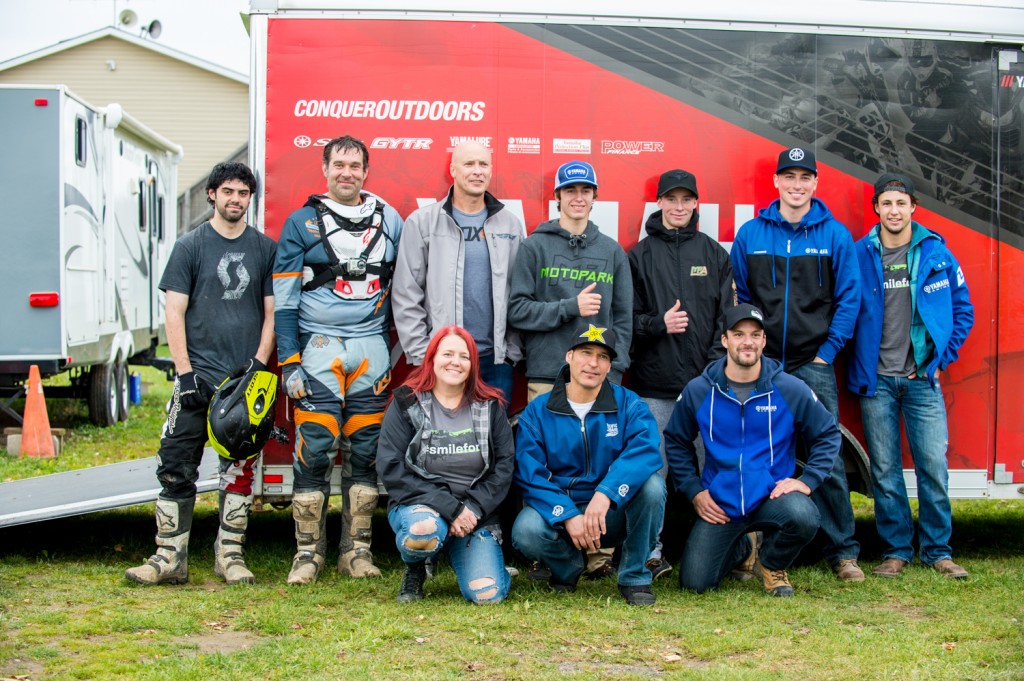 Most of the gang at the end of a great day of off-road riding. – Allison Kennedy photo 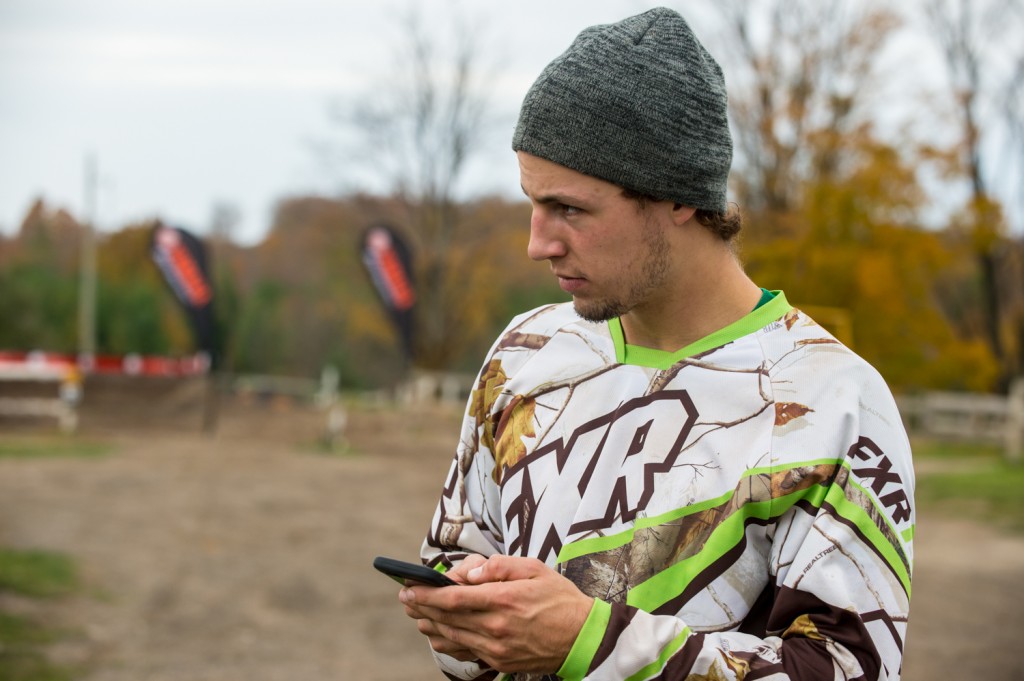 A special thanks to Hayden Halstead who was surprisingly quick to take a day off work to come ride the new Yamaha’s. Go figure… – Allison Kennedy photo

Yamaha has the off-road market figured out. All you have to do is look at the amount of blue on the line at a local race or a Pro national. The YZ250X and WR450F were new bikes in the line-up. The others were revised editions of the 2015s but they were a blast to ride. Head over to your local Yamaha dealer and check these bikes out…before they’re all gone.

Thanks for a great day at the track, Yamaha Motor Canada and Motopark.

If you missed it, here’s the video we put together from the day:

2016 Yamaha Off-Road Press Day at Motopark from Directmotocross.com on Vimeo. 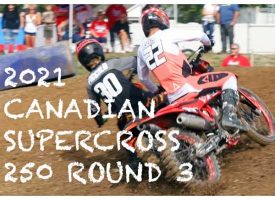 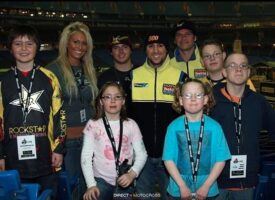 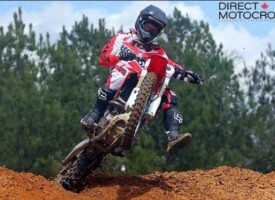 ICYMI | Catching Up with Colton Facciotti