Story and photos by Kyle Carruthers

The adventure began at GP Bikes in Whitby, Ontario.

It truly is amazing sometimes when for lack of a better term “the stars align” to make a lifetime experience worth remembering. That is exactly what happened to us on a fine August evening when my wife Leanne and I bumped into Ducati director, Chris Pearson down at GP Bikes in Whitby. Chris was in town on business along with his friend and fellow industry member, Jeff Weil from Arai Helmets who was also visiting GP Bikes to conduct a helmet seminar. They graciously invited us out to dinner, which quickly turned into good friends bench racing about motocross. Before we knew it and after a few hours of good conversation it was quickly suggested by Chris that we pick some new Ducati Hyperstrada’s and ride down to the Unadilla National which just so happened to be on that same weekend just outside Utica, New York. It really didn’t take us much convincing. “You mean to tell me I get to ride a brand new Ducati Hyperstrada down to New York for a three-day trip and I get to check out one of the world’s most famous MX events?” Yeah, I was sold and was even more excited that wife Leanne would get to tag along for the experience.

It really all got started when Chris was telling us about the new Hyperstrada and how it was basically engineered by the Ducati design team with a motocross bike in mind. In fact, this particular machine was truly inspired by a dirt bike design and when the Ducati Design and Engineer team brought this family of motorcycles to life they focused on the concept which included a model with higher ground clearance, a taller tapered tail-end and narrow sides to give it that dirt bike feel.

It was settled, Jeff Weil from Arai Helmets, Chris, Leanne and myself would head out first thing in the morning to the Unadilla National.

Sometimes the best decisions are made on a whim. From left to right: Leanne Carruthers, Ducati’s Chris Pearson, Justin Pearson, and Jeff Weil from Arai Helmets.

We rushed home after dinner and quickly began packing the necessities for a 3-day trip. After a not-so-sound sleep due to excitement, we were up early and off to meet Chris at GP bikes again in Whitby, Ontario, to pick up our new rides. Between wearing a new Arai XD4 Helmet and riding a new 2015 Hyperstrada, I was even making myself jealous even though I knew I would eventually have to give it back. The Hyperstrada is more than just a good-looking toy and as Ducati dubs it, it is a unique crossover motorcycle that is perfect in our minds for the motocross racer to hit the street on and this only became more and more evident the more we got to ride it. The Hyperstrada balances the perfect mix between the street rider and the off road rider and makes you sometimes think you’re racing to the first turn on the holeshot.

We started off by picking up our bikes at GP Bikes. Not only was GP Bikes looking professional as always, but the staff was more than helpful in getting us set up on our new machines for the weekend of riding we were about to enjoy. Between the easy-to-use controls, the seating position the relaxed bars and the easy start of the motor, I was already beginning to feel comfortable on the Hyperstrada. After that, we were quickly on our way after a test run on the Hyperstrada and headed east down the 401 highway towards the border crossing at Gananoque. Right away the bike felt amazing, between it’s comfortable seat, it’s easy-to-use controls and unbelievable 821cc engine we were well on our way for a weekend we would truly remember.

I can’t even describe the looks we were getting as we were riding down the road. I mean, it is a sight to behold when you see four beautiful Italian masterpieces riding in formation. After a couple pit stops we were quickly closing in on the Thousand Island’s and getting closer to the border crossing. We decided to take the more scenic route and quickly dropped down to the Thousand Island Parkway to absorb the breathtaking views. Between the awesome little towns, the beautiful houses and sun over the water it was really making me wonder if I was truly doing this. The best part was it was only day one of the trip.

The beautiful Italian machines were a hit everywhere the group went.

We took a stop at the Glen House Resort just before Gananoque for lunch and get our travel documents in order. I have never experienced a border crossing like this in my life. The border patrol officers just happen to be huge Ducati fans and spent more time asking us about our bikes than they did asking us anything else. After some good conversation with some fellow motorcycle enthusiasts we were on our way to take in the winding roads and sights of New York State as we started closing in the miles to Utica, New York, where we would be spending our first night before we hit the race the following morning.

Wanting to get off interstate 81 and really put the Hyperstradas through their paces, we decided to take an alternate route. It would add some time to our travels, but we were all more than OK with that. I could basically feel the Hyperstrada’s motor between my legs just begging to be let loose for a bit and have some fun. The back roads of New York State gave us the chance to lean the bikes from side to side and really use the Ducati as it was designed. Between the sport mode of the bike and the Pirelli tires gripping this bike felt like a 450 MX bike on steroids ready to take on any challenge we could throw at it. It was also equally impressive to watch Arai technical director Jeff Weil really work the bike as he comes from a long background of street bike racing. Between the rolling hills, the beautiful dairy farms, the old speedways we passed, and landmarks like US army base Fort Drum outside of Watertown, NY you really are in for a scenic route on a beautiful summer day.

To our disappointment, due to the fact that we were having too much fun we rolled into our first overnight stop for the trip in Utica. We were greeted with literality front door parking at the Radison and we were spoiled when we were simply able to pop off the Hyperstrada’s luggage racks and take our belongings to our rooms. A great night of dinner and comaraderie followed and we hit the bed early as we knew the next day at the Unadilla National, plus our ride after the race to Niagara Falls, was going to be enough for us to handle even on a good sleep.

Waking up after a beautiful breakfast at the hotel and a quick 35-minute ride, we pulled into Unadilla. I have heard the stories and seen the pictures but in truth they couldn’t describe the true feel of a US national unless you’re there to experience it yourself. Between the rolling natural terrain, the size and enthusiasm of the crowd and positive energy, the vibe you could feel was bar none. We had the world’s best racers ready to put on a spectacle for the crowd and we were still buzzing ourselves from our ride in on the Hyperstradas. I was like a kid in a candy shop. I had a brand new Hyperstrada as my ride, a press pass for the event and some of the world’s best racers around us on the world’s best equipment. It was great to bump into old friends and even cooler to take in my first US national with such a great group of people.

The Unadilla National lived up to all the hype, and then some, for Leanne and Kyle.

After watching Ryan Dungey and Christophe Pourcel take wins in their classes, we hit the road to start our four-hour ride to Niagara Falls. Once again, the weather was still on our side for the time being and it was actually quite nice to get out in the wind and cool off after a hot day at the track. We decided we wanted to stay off the interstate and take in the more motocross/tourism characteristics of the Hyperstrada and we opted to take a more science route off the I-90 and onto the back roads through small towns like the amazing town of Skaneateles and many more breathtaking towns before we hit Rochester. If you’re looking for a motorcycle trip that is within a day’s distance of the GTA make sure to mark the classic town of Skaneateles on your map. The historic downtown, an attractive mix of 19th-century Victorian homes and appealing boutiques and antiques shops lining East Genesee Street, sits right on the north shore of Skaneateles Lake. The beautiful and crystal-clear lake is known to be one of the prettiest and cleanest in the state, and small charming inns and restaurants back right up to it. As we rode through it on a nice summer evening we saw bands playing in the streets and it truly was a sight to behold with the amount of tourists in town taking in the atmosphere.

Hanging out on the lake in Skaneateles , New York, a must-see on your bike tour list.

With the weather cooling down very quickly with the sun fading, we decided to make another gas stop just outside of Rochester to re-equip for the home stretch to Niagara Falls down Interstate 490 before we reconnected with Interstate 90 to bring us to the border. After a chilly ride down the freeway we finally crossed the border back into Canada. I will never forget watching everyone take off their helmets and seeing the amount of smiling and laughter that followed. It truly was a fantastic trip so far and a night in the famous town of Niagara Falls at the Sheraton was going to be a great nightcap before we rode the two hours back to GP Bikes in the morning.

It was a bitter feeling waking up on that final day. The reality hit in that the weekend was going to come to an end and that I would have to return this motorcycle I had come to care for back to GP Bikes and Ducati, and the fact that good friends were made along the way. I could tell I wasn’t the only one feeling this way as we reminisced over the weekend as we ate breakfast in the IHOP restaurant in our hotel.

Nobody was ready to give the Hyperstradas back when the trip came to an end.

It was a thick ride back through traffic but we all made it home after three days safe and sound and with zero mechanical failures, which is a true testament to the quality of machine the Hyperstrada is. I can truly say that a Hyperstrada is the next toy on my bucket list and I do look forward to owning my very own in the near future. Remember, if you’re an MX rider who enjoys hitting the street and you’re looking for the perfect bike to do it all, make sure you consider the Hyperstrada and take advantage of stopping by a Ducati dealer to possibly try one out. I want to say thanks to Chris Pearson from Ducati for organizing this trip and a big thanks to Jeff Weil from Arai Helmets for keeping us well protected and filled with knowledge throughout the weekend. It truly was a dream trip for a small town motocross kid.

Frid’Eh Update #16 Presented by Label It 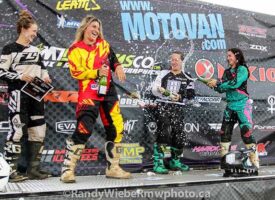 Off the Cuff with Jacqueline Ross | August