In case you missed it in last week’s Frid’Eh Update that was dedicated to the #18 rider, Brad Nauditt…

Well, we had enough fuel to get the Delorean back to week #18 this week (Yes, this should conclude our lame ‘Back to the Future’ references to cover up a mistake). Week #18 goes out to the Washington State native who we’ve all gotten to know very well over the past several years.

Brad Nauditt has gotten quite comfortable north of the border and will return again in 2016 on a new team. Some people out there who are newer to the sport may actually be surprised he’s American! It’s true. Even though he’s been to more Canadian races than a lot of our homegrown Pros, he is, in fact, an American.

Here’s a look at his 2015 Rockstar Energy MX National series:

Brad finished 7th in MX2 after a tight battle with Morgan Burger that came down to the final round in Walton to decide the position. They both had off days at round 10 and Brad got the nod by 6 points.

We grabbed Brad for a quick chat today and here’s what he had to say:

Direct Motocross: Hello, Brad. We just spoke to you very briefly a couple weeks ago and learned that you’re coming back to Canada this summer, but we’ll get to that in a bit. Could you please tell us a little bit about yourself to get started?

Brad Nauditt: Hey, Billy. My name is Brad Nauditt. I am 26 years old from Chattaroy, Washington (just north of Spokane).  I went to Mt. Spokane High School growing up and I have been a Pro rider for 8 years now already…man, where did the time go?!

While we’re at it, let’s find out a couple more personal things about you:

Favourite Artist: Anderson Pakk, (Malibu Album)
Favourite Movie: The Night Before is awesome one
Favourite TV Show: I don’t really watch TV that much, but maybe if I had to choose it would be Ridiculousness or Tosh.0
Favourite Food:  Chicken Parmesan !
Donald or Hillary? (Can we ask that???): (Laughs) Shoot, I don’t have an answer for you there, Billy.

You’ve been coming up to Canada for quite a few years now. What brought you north in the first place?

I first raced in Nanimo, BC back in 2007 before I really knew anything about the series with Kevin Urquhart with all of the support from my friends at Devol Engineering.  I ran very well that year and ended up having mechanicals every moto (Laughs). After that I got really hurt the next season and stopped racing for a bit, but when I got healed up, I decided to come up and give it my first full shot at the series.  I had such a good time and had the opportunity to meet so many awesome people that I wanted to come back every year!

What was your amateur career like? Did you hit the big amateur nationals?

My amateur career was nothing special.  I would say I developed as a rider a little later than most.  I wasn’t the best mini rider.  My last year on Superminis I started to get with the program, and it wasn’t until I was about 17 that I started to get the hang of everything.  I did hit a couple amateur nationals back in the day. I never was someone to light the world on fire.  I was usually 10-15th and my best finish at Loretta’s was a 11th in the 450A, I believe.

How did you do that first year in Canada?

My first full year in Canada back in 2010 was similar to my first go back in 2007.  I started in the MX2 Class and would have a couple motos in the top 10, but most of my finishes were out of the top 10 and my bikes that year didn’t hold up the best.  So, at the halfway mark I switched to the MX1.  At Gopher (Dunes) I had my first top 10 overall in the MX1 and my first holeshot in Canada.  Long story short, I ended up with #36 for the next season, which I felt was a decent building block for my first year.  But traveling that summer with my close friends was by far one of the best summers/experiences ever!

Can you sum up last summer in Canada for us?

I thought last summer was a hard one for me.  I struggled with some things that kept me from being where I wanted to be.  I felt like I should have been up closer to the top 5, but my starts just weren’t there and I was just disappointed in myself a lot that season.

Brad almost retired from racing in 2012 but: “It’s hard to stop racing. I have tried, and I keep coming back for more. I am a racer, that’s who I am.” – Bigwave photo

What did you get up to after Walton?

After Walton, I just went home and took some time off the bikes and went to work for the winter.  I finally got my first house here in Washington, so that’s been keeping me crazy busy as well.

Hey, what do you think about the changes to the schedule this summer?

I’m not to sure what the schedule even looks like.  I’m just racing each weekend as it comes. I heard some of the tracks have changed, but that should make things a little more interesting for all the people that haven’t raced there before.

What did you do over the winter?

I just got a job back here in Spokane and worked to save up as much as possible and raced some Arenacross as well. But other than that, I had a blast doing some back-country skiing with my friends, and spent lots of time working around my house and helping my parents out with some things too. I’m always a pretty busy guy (Laughs).

OK, so now you’ve announced you’re coming back to race MX2 again on a new team. Can you take us through how this came about?

Yeah, I am racing the MX2 this summer once again.  It came out so fast that I couldn’t believe it.  I went over to see my friend Graham Scott in Victoria, and we kicked around the Ride Red thought with SG Power.  Less than 2 weeks later, Jay James from SG Power had Honda Canada on board with a good program, and I couldn’t really turn down what was offered to me.  I am so thankful for everyone pulling together this summer.

Wait a minute, didn’t you almost retire from Pro racing a few years ago? What happened to that?

Yeah, I planned to stop racing back in 2012.  I felt like I had a great season finishing 5th overall in the MX2 class, and then I couldn’t find any support for the 2013 season and at the age of 23 I just wasn’t sure if it was worth it to risk everything to just skate by.  But then I found some great support for 2013 and had some great finishes that really made me believe that I could become a podium contender.  It’s hard to stop racing.  I have tried, and I keep coming back for more.  I am a racer, that’s who I am.

What more do you need to know, besides this?! – Bigwave photo

The Canadian series just keeps getting tougher. What do you think about the talent this coming season? Where do you hope to be at the end of the season?

The competition is definitely getting tougher and deeper every year which is great.  I am just hoping to ride the best that I can every race.  I think if I do that, it won’t matter where I end up because I’ll know I left it all on the track.

In 5 years I see myself riding for fun in the 30+ class (Laughs) and owning a company.  After years and years of racing and fighting battles, I feel like there is no reason why I couldn’t own my company and build that into something successful.

OK, thanks for talking with us today, Brad. Who would you like to thank?

How can you not cheer for that guy?! Thanks for taking the time to talk with us, Brad, and best of luck this season. Oh, and make sure Graham tells his dad we’re going to need a large coffee maker in the pits! 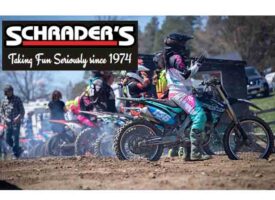 Out of the Blue | Erica Solmes | Presented by Schrader’s 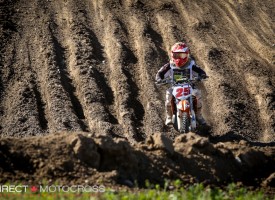