In case you missed it, we caught up with Jamie Powell:

Sand Del Lee is the home of the MX101 FXR Yamaha team and also 19-year-old #24 Jamie Powell from Richmond, Ontario.

The more we get to know Jamie, the more we learn about his sense of humour, and I think we can all agree that he’s gaining fans quickly with some of his off-track antics. More on that, later.

We got in touch with him this week. Here’s what he had to say:

Direct Motocross: Hello, Jamie. I can’t remember if I’ve asked you for your origin story, so let’s do that first. How did you get into Motocross in the first place?

Jamie Powell: I always rode a Baja 90cc around my field I have at home. Then, my cousin, Adam Powell, got me into the whole racing scene. My first time riding at a track was when I was 11 years old and then I did a fun race when I was 12. Then, it turned into a full-time gig!

My first number was #562. Honestly, just thought it looked cool when I first got a bike and ran with it until I got a pro number. Haha.

Who did you come up through the ranks with?

I came up with all the boys I’m still racing today: (Quinn) Amyotte, (Austin) Jones, (Jeremie) McKie. I used to race a bunch of MMRS stuff so a bunch of local MMRS boys and now I’ve ended up here with the same boys in the pro ranks!

Let’s talk about last season. Your best MX result was a 9th overall and your best SX result was an 8th at the final round. Can you sum up your season for us? Were you happy with it?

Was definitely an okay year. I know I could’ve done better but still happy with it. I need to figure out my starts and start out front and prove what I can do because starting in 20th does not really help my results.

After the season ended I just went back to working full-time. I was basically working full-time all summer as well. But over the winter I just worked and went skiing a bunch and enjoyed the off season and prepared for the upcoming season.

OK, we have to talk about your roller skating. I’m a guy who spent every Saturday and Tuesday night at the roller rink when I was a kid. You really need to explain what was going on in the Instagram posts I saw.

Ahahah, we were just chillin’ at Dreamland and Kody (Renzland) pulled out a set of roller blades and said put them on because I used to play hockey which is pretty well same concept and then we just started taking it to another level and basically put it into the program. A little bit of crosstraining going on with the skates. Haha.

If I said the names Larry Dallas or Jack Tripper, would they ring a bell with you? How about Skinny Minnie Miller?

Honestly, I have no idea about any of those guys. Koach [sic] put me in a pair of skates and then we just made it a daily routine of skating around the shop!

What’s the best music to go along with your “Shoot the Duck” moves?

Bon Jovi was always a hit for getting fired up to go skating but koach would put on some Saltine music and away we went!

Here’s a shot of Jamie working hard down at Dreamland in Florida:

What is it that you do for work?

I work for my dad at Powell Contracting operating heavy equipment. We do septic systems and back filling, landscaping etc..

What have you been doing this spring to get ready for the season?

I was down at Dreamland which is a super cool place and never thought I ever would’ve been there. I used to watch Dreamland on YouTube and it’s surreal to be training there with the team there. Now just out pounding motos at Sand Del Lee getting ready to race!

You’re with the MX101 gang again. What’s the plan for this summer as far as pitting and mechanic go?

Yes, with the crew again. Great crew to be around, love everyone there. As far as everything goes I’ll be with them all summer again just like last year. The team has expanded from last year but hope to be a main rider for them here in the next couple years.

Goals are to be better then last year. I don’t wanna be outside of top 10 nor do I see myself outside of the top ten. I’ve put in a lot of work to be where I am so I want to prove I have what it takes.

How old are you, anyway? Is racing south of the border something you’re interested in for the future?

I just turned 19 and racing south of the border would defiantly be a cool thing if stuff works out here! See how far racing in Canada goes and maybe try something down south!

Happy birthday, by the way! What did you do to celebrate?

Thank you! Celebrated it by a 10-hour work day and packed for the weekend. Haha. I work full-time so not much time to celebrate but it was a good time!

I assume you’re racing at Sand Del Lee this weekend?

Yes! I’ll be at Sand Del Lee racing the Cash Class. I was going to go to Gopher Dunes but we didn’t have an RV to stay in due to a tree falling on ours this winter and just stuff wasn’t fully ready to go all the way there.

Well, good luck, and I’ll see you in a couple weeks in Walton. Who would you like to thank? 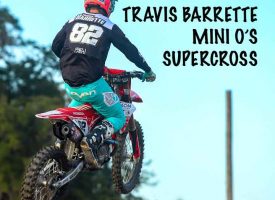