Wow, what a 450 race! The entire 20-lap battle was impressive, but how about those first 2 laps. Ken Roczen and Ryan Dungey absolutely sent it, going back and forth, and it was something to see. The pair basically rode 20 near perfect laps and smoked the rest of the pack. The dirt in Dallas was very slippery and didn’t offer much passing. It didn’t slow the two leaders as they were glued to each other for the whole race. Let’s take a look at the results and see my thoughts from Dallas.

1st Ken Roczen: The last few races Ken has looked so much better. His starts have been there, and that is what he needs if he wants to keep Dungey and this championship in check. Ken kept the same pace for 20 straight laps and notched his 2nd win. That race proved to Roczen, himself, that he can still win this title.

2nd Ryan Dungey: The old Dungey would have settled for the safe 2nd place. The new Dungey wanted the win and never let up. Ryan knows that there are 10 rounds left and he can’t settle and give anyone an easy 3 points on him. It was awesome to watch the top 2 keep that pace for 20 laps!

3rd Jason Anderson: Anderson got a much better start than what he had been getting. With a slippery, one-line track, even with his passing power, I don’t think he’d finish this well with his old starts. He has been very good all season, but I don’t think he could have ran that pace with Roczen and Dungey and been mistake-free in Dallas.

4th Cole Seely: Another great ride by Cole. He would have had 3rd in the bag, if it wasn’t Anderson chasing him. For some reason, Jason just seems to have Cole’s number every time they battle for position.

5th Eli Tomac: Eli rode well for 5th after starting 8th. He is out of the title picture, but he will get a pair of wins before the series leaves Vegas.

6th Marvin Musquin: Marvin went down at the start and had a great ride back to 6th. I really think he’s finally getting over his wrist surgery and his confidence is growing and his results are looking good,

7th Davi Millsaps: Davi is riding with a damaged thumb and can barely hold on. A 7th is a very good ride on a slippery track. Davi has been a pleasant surprise this season and is doing way better than I expected.

8th Christophe Pourcel: Christophe had his best 450 result indoors with an 8th. I don’t know if he is holding back in the mains, or if his fitness isn’t on point? I have no idea how he can go so fast early on during the day, and then just cruise for the mains. Lets hope he’s past it and we see the Frenchman that destroyed the field and won 2 straight 250 SX titles.

9th Trey Canard: This guy is way too talented to be barely making the top 10. I’m glad he’s not out hurt, but I miss watching the Trey of old.

10th Jake Weimer: Good ride for Jake. He looks good on the Suzuki, and I’m willing to bet he gets a top 5 soon.

Biggest Stud: The duo of Roczen and Dungey are my studs. The pace they had going for all 20 laps was impressive.

Biggest Dud: I wasn’t a huge fan of the track. The dirt was slippery and didn’t offer a lot of passing options

Biggest Surprise: I thought #22 Chad Reed would be better. He just seemed off all day.

Thanks for reading. I will see you in Atlanta. 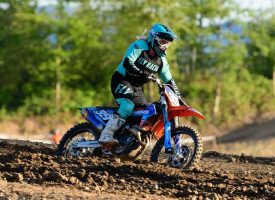 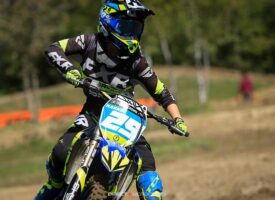 Out of the Blue | Alissa Harkin | Presented by Schrader’s 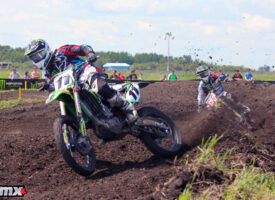