Both MX1 motos this past weekend in Ulverton had some excitement. The top guys are going so fast right now, they are getting into lappers very early. Moto 1 leader Davi Millsaps came in hot and hit one causing him to go down and hand over an almost certain win. In the 2nd moto, Brett Metcalfe was on the gas and left everyone behind. His teammate Matt Goerke took the overall with a 1-2 after realizing that nobody was catching Metty in moto 2. We had another red cross docking as #27 Shawn Robinson lost 10 positions for jumping on the flag. I didn’t see the incident, but Shawn and his father Dan were pretty disappointed about the penalty. Let’s take a look at my thoughts and the results from Ulverton.

1st Matt Goerke (1-2): This guy reminded us all why he is a 2-time champ. After some serious bad luck out West, Matt has worked very hard to improve his bike and he’s clawing back into this title fight. With 2 overalls in a row, Matt is going to be very dangerous for the remainder of the season. With Millsaps not at 100%, there is no better time for Matt to pour it on and take it right down to the wire. He wants to keep that #1 and is going to do everything in his powers to keep it.

2nd Brett Metcalfe (3-1): Nobody was touching Metty in moto 2. Yeah, he looked that good. He has made some impressive gains in the last 2 weeks and doesn’t seem to be easing up anytime soon. If he can start with the leaders, he’s going to be very hard to beat.

3rd Kaven Benoit (4-3): ‘The Rookie’ did it! Kaven had a great Ulverton. He was disappointed that he went backwards in moto 1, but he made up for it in moto 2. He lost his rear brake earlier on which makes his 3rd in the moto even more impressive. Now that he has tasted the podium, he’s going to be even harder to beat.

4th Davi Millsaps (2-8): Davi looked great in moto 1 until he hit a lapper and went down while leading. In moto 2, he was a little off of his usual pace, but you have to remember that he has a nice points lead and is still banged up from a practice crash at Glen Helen. For a guy dealing with bad ribs and blistered hands, he still looked pretty damn good.

5th Colton Facciotti (6-4): We are all wondering what’s up with Colton. But to be honest, he’s still riding very well. It’s just the class is so stacked and we are so used to him dominating. I’m expecting big things from him at Deschambault.

6th Mike Alessi (5-5): Mike has struggled a little on the softer tracks, as he’s still adjusting to the new bike. He was having a ton of fun early on in free practice, and I would look for him to bounce back strong on the next 4 tracks. He’s too good not to be fighting for podiums and wins.

7th Cade Clason (7-6): Would you believe that Clason pulled the first moto holeshot? He finally found his starts this weekend and got to taste the pace of the top group. Cade actually set his bike up for the start by using a paddle tire. It worked great for both starts but he suffered a little on the harder sections. I was really impressed with his battle with Millsaps, and so was Davi. He actually came under Cade’s tent to congratulate him on his ride. Two classy guys right there.

8th Tyler Medaglia (8-7): Tyler has made the jump to the new 2017 Husqvarna FC450. With very limited time on it, Tyler looks good on the bigger bike. I expect him to make some solid improvements this week and give us a holeshot in his backyard at Pleasant Valley.

9th Morgan Burger (10-10): Solid day for Morgan. He’s been riding really well so far on the East. In the past, his results weren’t always as strong in the East, but this season he seems to be in a really good place and having a lot of fun, and his results are showing it.

10th Keylan Meston (9-11): This guy just puts his head down and works hard. He still impresses me with his improvements from last season. I just wish he’d make it a little easier on himself and get some better starts.

Biggest Stud: Goerke and Metty are my studs. They were down quite a few points to Millsaps, but they worked even harder and have dominated the last 2 rounds.

Biggest Dud: My dud this week was all of the fans that left just before the last 450 moto. What’s another 35 minutes?

Biggest Surprise: Clason getting the holeshot in moto 1 is my surprise. The call to run paddle tire worked. 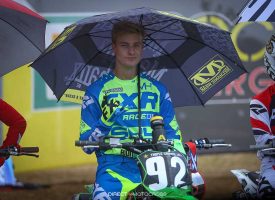 Frid’Eh Update #16 Presented by Label It 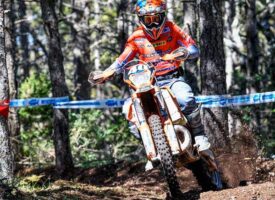 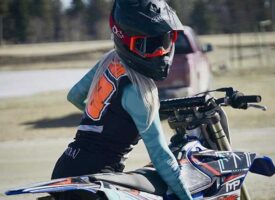 Out of the Blue | Jamie Secord Abate | Presented by Schrader’s