By By Billy Rainford

Good morning. I hope everyone had a great weekend and was able to catch some of the moto action from above and below the border. We’re so busy at our races that I really don’t even get a chance to check out the Lucas Oil Pro Motocross action until sometime in the middle of the week. Did Ricky Carmichael win? I’m starting to feel sorry for Kevin Windham getting second to RC all the time…

I’m going to dive right into the red flag issue from Sunday at Moto Valley in Regina. Here’s the breakdown of what happened:

Minnesota rider, #144 Nolan Heppner, got into the lead in the first MX2 moto. He came sweeping around the first corner area and hit the tight right-hander into a rhythm section. He said he just got loose on the face of one of them and basically did the classic ‘roll the windows down’ kind of crash as he flew through the air looking for the best way to land. Well, he hit the next jump pretty hard and was down and out.

The flagger was standing on the inside of the preceding corner and threw the flag up immediately. I was standing right there talking with someone and we were both concerned that the riders may not be able to see the flag until they were starting to look up to head into the section out of the tight corner. Riders a few places back would have seen the flag as they entered the corner heading in the opposite direction to their right, if you know what I’m saying.

#4 Cole Thompson, #15 Shawn Maffenbeier, and #101 Mark Worth (he was actually down in turn 1) all had trouble off the start. Thompson and Maff were charging through the pack together and, on lap 4, I’ve got Maff all the way up to 3rd, Cole in 6th, and Mark in 9th.

The problem was that Heppner crashed heading into the second lap and had been lying on the track for a while. Whoever was on the scene actually moved the bike off the track (I think it’s Gordon who looks like he was placing bike in front of Nolan and then another official comes in to push bike off the track) while Nolan still lay in the middle of the track unprotected! That was the major issue that I saw at the time.

I’ve now had the chance to go through our video of the race. In my opinion, the flagger did exactly what he was told to do and got the flag waving as soon as he saw the crash and knew Nolan was in a bad spot. I feel he was correct in waving that red cross flag for this incident. You can jump on a yellow flag in Pro Motocross but a waved red cross flag means ‘wheels on the ground.’ Nolan’s safety was definitely at risk here, so, yes, red cross here.

The problem arises when you look at where the flagger was standing. The riders would have been looking down into the rutted corner on one of the fastest sections of the track. Depending on their racing situation at the time, they probably weren’t looking up and to their right.When the flag is 5 feet ahead of the downed rider, and riders are looking down heading into a tricky section, there is a good chance riders would not see the flag.

Hindsight is 20/20, but I feel that if the flagger had jumped out into the lead up to the corner and waved the flag, riders probably would have had a better chance of seeing it before it was too late. However, the flagger did what he thought was right and waved the flag as best he could as soon as the crash happened. I think a more seasoned person with a little more courage and aggression would have assessed the situation quicker than a young and probably rather timid adolescent would in these situations. I can’t blame him for being young and nervous (I’m also not sure of the age of the flagger). I’m sure I would have been the same way at that age.

So this brings us to the debate we’ve been having since Davi Millsaps and Matt Goerke were handed their penalties at round two in Nanaimo. How can we fix the issue that is playing too big a part in our championships?

We had a great talk (well, sort of, because he had lost his voice) with head safety marshal, Daryl Murphy, at dinner Sunday night. If anyone thinks for a moment that he doesn’t have the riders’ best interest and safety first and foremost on his mind, they are crazy. He wants nothing more than to have the series run safely. Did anyone see him help #259 Tallon LaFountaine up the hill after he’d crashed and hit his head?

The rules state that there is a 10 position penalty for jumping on a red cross flag. Yes, the rule is harsh, but that’s a debate for another time. The issue here is the actual effectiveness of the flag being waved. In my opinion, nobody out there wants to jump on a red cross flag. Period. Every rider I speak with says the same thing: “I wouldn’t want people jumping on top of me if I was down, so I would always do the same thing for them.” It sounds pretty straight forward to me.

I don’t have the answer, but I do feel that there is a strong case for an appeal in some of these cases. They need to be looked at on a case by case basis. I will go so far as to say I’m on the riders’ side on this one. That was a difficult flag to see in time. In fact, we were trying to motion to the flagger to move to the entrance of the corner. You can’t stand in that spot and have the riders see you in time, especially as tightly bunched as they were heading into the second lap.

Yes, there were a bunch of riders who jumped on that flag in this incident, but can we blame them? I don’t know.

Here’s a look at the situation:

Also, people are wondering about the 10 place penalty and why it only looks like they got 7 or so. You move the first person charged with the penalty down 10 spots. As more get the same panalty, it moves other up and so on. It ends up looking like it’s not 10 spots. It made sense as it was explained to me last night.

Kaven Benoit and the MX1 Class

So, #118 Davi Millsaps won the MX1 class again by sweeping both motos. Who is going to challenge him? Well, #11 Kaven Benoit had the best look at his lines for the longest of anyone we’ve seen so far. Kaven had an outstanding first moto Sunday in Regina and actually made Davi work hard. Anyone who wasn’t sure if Kaven was ready to compete at this level on a 450, you can rest easy because Kaven is fast-proving he may be our top Canadian MX1 guy very soon. Yep, I said it.

Davi pulled the holeshot and the order was Millsaps, #1 Matt Goerke, Kaven, a gap back to #800 Mike Alessi, #6 Cade Clason, #2 Colton Facciotti, #5 Tyler Medaglia, and then a gap back to #28 Keylan Meston. This was on the second lap.

Goerke messed up and Kaven found himself in 2nd behind his teammate with a decent gap back to the rest of the pack. On lap 10, Davi had stretched out a bit of a lead over Kaven and Kaven rode alone in second spot ahead of the Goerke, Alessi, Facciotti battle.

At the flag, Davi was only 7 1/2 seconds up on Kaven who had 11 seconds on Matt in 3rd. It was a very impressive ride that will have Kaven full of confidence as we head east in two weeks.

Unfortunately, Kaven’s luck again ran out in the second moto. Mike Alessi grabbed the holeshot (surprisingly, his first of the season) and had Davi and Kaven in tow. Millsaps was able to get around him quite quickly on the first lap and he, Mike, and Kaven set out on what was potentially to be a great fight.

#11 disappeared into the mechanics’ area after a rear hub let go causing the chain to finally come off. I was also told that it resulted in a messed up transmission, too. Whatever it was exactly, Kaven wasn’t able to continue and suffered another DNF. His 2-DNF still gave him 9th on the day, so all was not lost.

My point of highlighting this is to show how solid Kaven’s riding in this class has become. Watch for him to keep improving as his confidence grows and he starts thinking he can show Davi a wheel or two as we head east.

Ryan Villopoto Lines up and Races in Washington!

Check out this article on Kitsap Sun that shows Ryan Villopoto and his younger brother, Tyler Villopoto, line up to race in Washington.

Check out the article HERE.

After winning the 2016 Women’s West MX Nationals Saturday in Regina, #50 Shelby Turner headed to Calgary for the Red Bull Rocks and Logs event at Wild Rose MX in Calgary along with 3rd place finisher, #151 Lexi Pechout.

All I know at this point is that Lexi Pechout won the event again. If you have some time, here is the archive of the live coverage from Shaw TV Calgary:

You can check out a photo gallery from the Calgary Herald HERE.

OK, it’s time to hop in the #DMXvan and start driving east toward home! No, not all the way home. I will stop into Winnipeg and check out all the action at the FXR Ride Day tomorrow. I went last year and it was a great time. If you ride FXR gear, get in touch with them and maybe you can spin some laps and eat a few cheeseburgers with us! Watch for some photos and maybe some video from the event in the coming days here on the site. Thanks for reading, and have a great week! 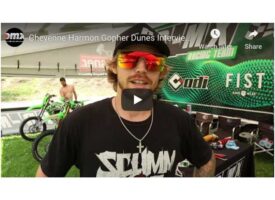 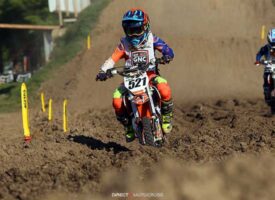