Good Monday morning, everyone. You know when you’re driving really late at night and you start getting really tired? You know it’s not a good sign when you start wondering if you could sneak in a little nap. No, a ‘short nap’ while doing 120kph on the 401 at 3:00am can never be a good idea. Nothing is worth taking that kind of risk. Well, except maybe getting home in time to do your Monday Morning Coffee column!

Nah, we managed to get out of Ulverton last night just before 8:00pm. Ulverton to DMX World HQ in London, Ontario, is booked into Google Maps at 862 kms/8 hours 14 minutes. That means, best case scenario, we get home at 4:15am. Fortunately, the team stepped up and Jeff McConkey drove for a couple hours off the start so I could type out results from Round 6 and get his 12 podcast interviews ready to post onto the site when we pulled over somewhere and found internet.

Jeff chatted with 12 riders at the end of the day in Ulverton.

(If you haven’t listened to his PODCAST interviews yet, you can do so HERE)

You know what’s not very helpful? When the ‘state-sponsored’ OnRoute restaurant stops have hours! Shouldn’t everything advertised from the highway at one of these places by open around the clock?! I would say, yes. We pulled in and Timmy’s was the only thing open. Did it have a massive line and were the 3 staffers stressed out at the thought of being the only place open and being grossly under-staffed? Ya, ya they were! Oh, and did James Lissimore grab the very last bowl of potato wedges? Yep.

Anyway, it was kind of equivalent to seeing a restaurant sign from the highway and pulling off only to read the next sign that says, “That Place, 10kms left.” What? Come on! There has to be a maximum distance from the highway if you’re going to lure us down from highway speed to pull off. I won’t go more than 1/2km. I say that’s a good place to start. If it says 2kms left, I just pull right back onto the highway and look for the next one.

So, after we stopped and were all forced to eat stuff we weren’t looking forward to, I hopped behind the driver’s seat and headed west into Ontario. Our next stop was getting Jeff and Melissa home to Newcastle. It’ a little town east of Oshawa on Lake Ontario. OK, I think I can make it there.

This gets me to my “maybe I can sneak in a short nap” part of the story. It was to the point where it wasn’t safe and I was going to have to sleep in the DMX Van for at least 20 minutes, if we wanted to make it there between the mustard and the mayo.

You also have to picture James sitting in the passenger seat editing and sending race photos to all the people he sends his shots to immediately after these events – he wasn’t sitting there sound asleep the whole time.

Now, we all know those road trips where we’re the second one in line to drive, but we’ve stayed up the entire time keeping the driver awake for their shift and now it’s time for YOU to drive. That really sucks. I really expected to have to sleep a while, but James stepped up and said he’d drive for a while while I got some sleep.

(Side note: as a would be photographer, I’m always extremely impressed to sneak peaks over at James’ photos as he’s working on them. It’s like sitting in front of Simon Cudby at a Supercross in the media room…you just don’t do it. Nobody wants someone of his caliber looking over your stuff. Every time I looked over at James’ laptop, there was a potential magazine cover shot! It’s really cool to see someone as good at what they do as he is.)

Anyway, off to sleep I go, waiting for my turn to drive when we hit Toronto, or somewhere close by. When I woke up, I asked if he was still OK. I also asked if he wanted to pull over so I could close out the drive. That’s when he said, “We’re in London.” I have never heard anything so beautiful in my life! We were home! He drove the rest of the way home and I slept the entire time. It was amazing. Thanks for that.

Also, if you’re still waiting for any photos from James, he was awake until 5:00am and I haven’t heard him stir from downstairs yet. Give him a little more time and I’m sure you’ll have your perfectly-exposed, brilliantly composed Lissimore Photos pics.

“I was absolutely floored to see the exceptional creativity from these action sports stars and future legends. They proved without a doubt that they are the world’s best,” says Pastrana.
More than 100 FMX, BMX, skate, scooter and inline athletes flocked to Salt Lake City to compete in Nitro Circus’ bold reinvention of the action sports competition co-founded by Pastrana and Nitro Circus CEO and Creative Director Mike Porra.

The United States’ Gregg Duffy took the top spot with the first successful double front flip in competitive FMX history and Australia’s scooter-turned-BMX athlete Ryan Williams stole first place and the hearts of social media and action sports fans everywhere. “This is the biggest win of my life. It’s crazy. It’s insane. I’m so pumped,” says Williams who is also a regular in the Nitro Circus Live global tour.

“We are so proud of these incredibly skilled athletes who had fans roaring with approval. They made history tonight,” says Porra. Athletes competed in seven events on a massive layout stretched across the stadium floor and into various sections of the stands. The official, final results are as follows:

BMX Best Tricks: Presented by Be The Match

OK, it’s nap time and then it’s a full week of editing content from Ulverton MX for the site. There are only a few days to be here at home before we head east to rejoin the rest of the carnies for the return to Pleasant Valley in Truro, Nova Scotia. Thanks for reading, and I hope this gave you enough to get through a nice hot cup of coffee. Stay tuned for lots of posts from a great weekend east of Montreal. Have a great week.

As I watched the 2nd MX1 moto, I said to Mitch Goheen, “Hey, if Cade passes Davi, he’s going to be pretty happy!” Well, Davi was feeling some pain and got passed. It was pretty cool that he came over to congratulate Cade on a solid race afterward|Bigwave iPhone photo 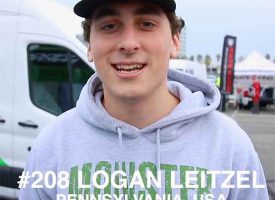 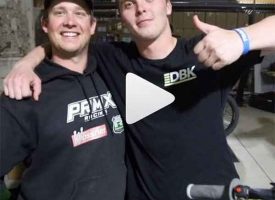 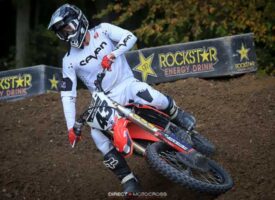