Welcome to the start of another school or work week. There were lots of moto-related things going on all across Canada as winter loosens its grip on most of the country (Sorry, Newfoundland). Jeff McConkey headed to Motopark in Chatsworth, Ontario, for their Opening Day, and I headed up to Horseshoe Valley Resort north of Barrie, Ontario, to check out the final round of the CSRA Canadian Snowcross/Snow Bike Championships.

But first, we should probably touch on a few things from the St. Louis Supercross that took place Saturday night in Missouri. Here’s a look at what went down:

OK, OK, I’m sure we’ve all taken the time to watch the heats, the mains, and the press conferences. The hot topic of conversation and debate is the Chad Reed vs. Ryan Dungey situation.

I have to admit, when I watched the heat race, I didn’t think Reed was doing anything wrong as he did what he could to keep Dungey behind him. I thought when he held his line and kept Ryan behind him as they approached the finish line was a bold and confident move, not rolling over. However, in the press conference, Ryan mentioned Chad had come over on him in the whoops and appeared to try to take Ryan’s front wheel out. I didn’t notice that in the race but maybe the cameras where focused somewhere else?

Obviously, someone told Chad (or showed him the video) that Ryan had called him out during his heat race interview and that got him rightly fired up. I get that.

Unfortunately, when Chad held Ryan up in the main event, it effectively robbed everyone in the stadium and the millions watching at home the chance to see exactly what everyone was hoping for.

I’m sure you, like me, were pretty pumped to see Eli Tomac and Ryan Dungey come out of the first turn together. We were all hoping for a great battle between the two riders fighting for this championship.

Yes, Eli pulled away early on, but Ryan managed to get close before they approached Reed, who was being lapped in 16th position. We will never know if we were in for an amazing race or not, that opportunity was taken away when Chad failed to allow Dungey by.

And then there are those who argue that he should have been able to get around Reed if he was that much faster. That’s not the point. Chad Reed is not a 16th place rider on most days. He has the capability of running the top riders’ pace at times. He showed that by ratcheting up his pace when he saw #1 behind him.

He got his revenge on the track, but the repercussions off the track may come back to haunt him. Even diehard Reed fans are saying it was a bad move.

If you’re a racer, you’ve probably been in both positions: you’ve been lapped and you’ve also lapped someone. You know how it works. I always enjoy it when, at riders’ meetings, they say, “The blue flag means there’s a race going on and you’re not in it!” Yes, I realize lappers are often in their own battles, but you get the gist.

Anyway, the points race is now down to 4 points for this 450 title. A muddy race in Seattle may shuffle the deck this week. Let’s wait and see what Chad has to say as the week goes on.

The MXGP series takes a week off before heading to Italy for the MXGP of Trentino – April 16th.

The Amsoil Arenacross series takes a couple weekends off before heading to Denver, Colorado – April 22-23.

If you’ve ever seen Hayden Deegan ride, you know this is a pretty big deal and shows just how fast young Canadian #43 Noah Viney is riding.

Speaking of Noah, check out this cool video from BTO Sports featuring #43 from the Freestone Championship:

I managed to make my way to the final round of competition for the CSRA Canadian Snowcross / Snow Bike Championships. I haven’t been to one of these events before (unless you count that little soiree in Colorado called the X Games) so I was looking forward to getting out and shooting some photos.

Unfortunately, this round takes place on a ski hill and so it made it pretty difficult for me to get to many different spots to shoot (this knee isn’t going to fix itself, apparently).

It was a very well-attended event and I think the appearance of internet superstar, Larry Enticer, may have helped with the numbers.

If you’re an Ontario rider, you know “Larry” pretty well, but this new-found fame is some next-level stuff! He’s taking it in stride and making the best of it. I shot a whole bunch of video and will put together a short edit as soon as I press ‘submit’ on this Monday Morning Coffee.

I wanted to be there to see motocrosser, Nathan Bles, take home the inaugural Snow Bike championship, and he did it. Congratulations, Nathan. No matter what happens, you won the first CSRA Snow Bike title, and that’s pretty cool.

See you at the races… | Bigwave photo 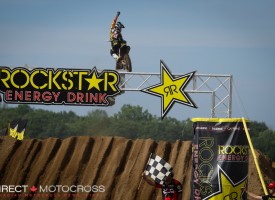