#56 Nathan Bles from Bayfield, Ontario, has indeed suffered a broken left wrist as the result of a crash while racing at Baja Acres in Millington, Michigan, Sunday, May 29th. The fall and resulting injury come eerily close to the one-year anniversary of his badly broken left humerus last season (2 days off, to be exact).

We gave the Big Steel Box Fly Redemption Racing KTM rider a call and caught up with him as he was relaxing on the couch awaiting further assessment. The crash happened in the second moto of the second day of competition, after a successful day 1. Nathan said he was using a fast line on the outside of the first turn (a 180 left) that had been banked up. When he headed into it during his second moto, he came together with Michigan rider  Michael Bidus and got sent over the berm, falling 10 feet onto his extended left arm.

He was checked out at the track and then driven home to London where he was placed in a cast. He will be re-assessed Thursday when it will be determined whether he needs surgery to set it properly or not.

Nathan plans to give his arm the required time to heal 100%. If that means he’s good for round 5 at Gopher Dunes, great. If not, he’ll line up to race when he is completely recovered and no sooner.

Nathan Bles to Redemption Racing in MX1 for 2015 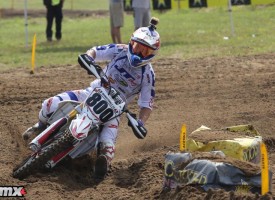