On the Radar: Charlie Johnston

On the Radar: Charlie Johnston

How did you get started in racing?
I got started in racing a little later than a lot of my friends. I was 12 years old or so when my dad brought home our first bike that me and my two brothers shared to start out on. It was April 1st and he told us he was fixing it for a friend, and we were bummed! Then, right before we all went to sleep he said, “APRIL FOOLS!” and told us it was ours! (Laughs) We rode the wheels off that 1976 Suzuki RM60. I started racing in the Tuesday Night Mini Motos in Calgary. Looking back, it was an awesome place to get started – just a super-relaxed setup with a whole night devoted to the kids to race once a week! We still do it at WRMA now.
What is your favourite track and why?
I have a couple for sure: Washougal was awesome to race at a couple years ago on the amateur day. Glen Helen is a really fun place to ride as well. If I had to choose my favourite it would probably be Elko, BC. There is a little track hidden off a logging road that is straight-up awesome! The dirt and layout is so much fun!

Who is your favourite rider and why?
My favourite rider would definitely  be Christophe Pourcel. That guy is absolute magic on a bike. The way he rides, the lines he uses, I could watch that guy all day.

What Canadian Pro do you look up to and why?
I really look up to Ross Pederson. He is a Canadian legend for sure! He actually comes and stays at my house a couple times a year to visit with my dad. He is a really genuine guy who has an abundance of knowledge. You can learn so much just from listening to him. I have never met someone who was so mentally tough – he would train so hard it’s almost impossible to imagine! When he went to the races he had no doubt in his mind he was in better shape than anyone else on the line and wouldn’t  accept anything below 1st place.

Charlie’s favourite rider is Ross Pederson. He spent most of last summer helping his girlfriend, Danika, since he was injured. Bigwave photo

What are your goals for this season?
I want to ride this year! (Laughs) 2014 was a complete write off. I started out with a broken humerus on the 2nd ride of the year. I had to take a couple months off after that. When I started riding again, I had to really push to get back up to speed. I went to a local race and was riding well, when I hit neutral off a tiny jump and ended up with a broken femur – just wasn’t my year that’s for sure. For 2015, I want to have solid finishes at the Western Nationals. I want to put a lot of hours on my bike this summer!

What are your biggest accomplishments?
Getting my Pro license was a big one for sure! It takes a lot of work to get out of the super-competitive Intermediate classes. Also, I won a MX1 Junior title a couple years ago at WCAN in Raymond. I’ll never forget that one!
What is your favourite part about going to the races?
I love seeing all my friends! I am very involved in the sport in a lot of aspects, from managing the track in Calgary to racing locally and on the National level. I have met a ton of great people, including my beautiful girlfriend Danika (White) at the races. Going racing on the weekend is something hard to explain. We drive lots, make virtually no money and run a risk of getting hurt every weekend. That being said, I wouldn’t change it for anything! It’s a ton of fun to go hang out and compete with your friends! When I got hurt this year at the races it was an unreal feeling seeing all the guys I was racing with like Mat Scott and Keylan Meston turn around at the red flag to come help put me onto a stretcher with the medics. That just goes to show how awesome the MX community is.
What would you like to when you grow up?
I have no idea! I haven’t put in enough thought about what I want to do in the future. I am just focusing on having fun at this point in my life!
What do you like to do when you aren’t racing?
When I’m not racing, I’m usually working on bikes at home (Laughs)! Between myself, my girlfriend and her dad, there’s always a bike that needs some love! I also spend a lot of my off time at the lake in the summer – jet skis, paddle boards, camping. All the fun stuff!

Charlie says that between Danika, her dad, and him, there’s always bike work to be done. – Bigwave photo

I would like to say thanks to JC at Cycleworks for all the help with racing, gear, bikes, advice, pretty much anything associated with riding and racing. Yamaha Canada, Enzo racing suspension, SOSA originals for the coolest jerseys, HATT AUTOMOTIVE for keeping whatever I’m driving to the races running well, LimeNine for the awesome decals, and my girlfriend and her dad Randy, We all work as a pretty awesome team at the races for 3 bums in a trailer! As well, thank you for the interview, Jeff.
Tagged 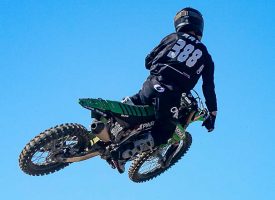 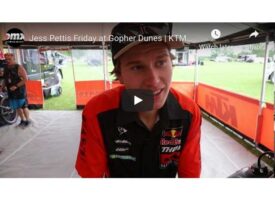 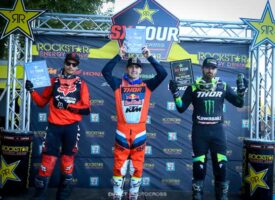