I actually just started out, the Future West Arenacross series was my first time racing! I spent a ton of time on the track this past year. I’d always wanted to try racing, and once I got a taste of it I couldn’t get enough.

Absolutely, I’ve been on a bike for as long as I can remember. I grew up with an amazing group of friends. We all rode and I was always one of the boys. I didn’t have the same aspirations as most little girls do – getting into racing was always a goal for me!

Motocross is definitely a sport that’s known to be dominated by males; the bikes are big, and women aren’t built like men are, so it has its challenges, but, us ladies race together, we’re all equal, and I think we’re more than capable of being just as impressive on the track as men are. It’s also an open door for women – we haven’t been competing in the sport for as long as men have, and there’s so much opportunity and room for growth. I think we’re really lucky.

I’m a huge Ryan Dungey fan. His riding style is flawless, I love watching him race, and he seems like a pretty stand-up guy. I’ll always love Ricky Carmicheal as well, his talent is endless. He’s kind of a hero of mine. When I was a kid, I named my pet Guinea Pig ‘RC.’

Ashley Fiolek. She’s such an inspiration, and an incredibly talented rider. She has taught so many women that nothing can stop you from achieving your goals if you want them bad enough. As a rider, she has contributed so much to the sport. We need more girls like her.

I would have to say Ryan Lockhart is my favourite Canadian Pro. Watching him out there every morning during the AX series coaching kids was pretty cool! He dedicates a lot of time to doing schools and helping young riders develop their skills. I think he’s such a good guy. As a Pro he’s expected to be kind to his fans, to sign autographs and say ‘hello,’ but he does so much more than that. He gives a lot. Also, he’s an amazing rider!

I love my hometown track, Green River MX, in Pemberton. It’s where I learned how to hit kickers, and it’s where I’m going to continue to learn so much more. It’s such a fun track to ride and the atmosphere there is great. I love all the members. We’re like a big family.

My parents are definitely my heroes. My dad got me on my first bike, and he’s taught me so much. He still gives the best tips. He always knows what he’s talking about, and has the right things to say. Though my mom hates that I ride dirt bikes because it terrifies her, she is still incredibly supportive and proud of me. They’ve always taught me to be true to myself and my dreams, and that absolutely anything is possible if I set my mind to it. They are and always will be my biggest fans.

My goals for this season we’re pretty simple: keep it on two wheels and make the checkered flag! I also just wanted to progress as a rider, to do things that I hadn’t done before, hit bigger jumps and get better in the corners. I definitely feel good about how it went. My goals for next year are definitely going to be more defined. I really want to be successful and I feel like this past season has prepared me for it.
What are your biggest accomplishments?

I haven’t really done enough racing to have many big successes, but, I got to head home from the last round of the Future West AX series with a podium, and a third place trophy. I was pretty excited about it! At the first round, I popped my clutch and went over backwards out of the gate. Then, at the next one, I got a holeshot, so I would say that progression was a pretty big accomplishment as well.

I love absolutely everything; it’s my favourite thing in the world. It’s so intense and nerve-wracking, but when the gate drops your mind clears, all of your focus is on the track, and it feels so amazing. Nothing beats it! I also love the people I’ve gotten to know. I’ve met some incredible girls and made really good friends. Heading out to a race on the weekend and knowing you get to meet up with your girls and twist throttle is pretty great.

I spend most of my free time on my bike, but I have two horses and I love getting out and riding them whenever I get a chance. I also spend a lot of time in the off-season snowboarding. I live in an amazing place for it and it’s pretty nice to have a hobby when I can’t be on my bike.

“I spend most of my free time on my bike, but I have two horses and I love getting out and riding them whenever I get a chance. I also spend a lot of time in the off-season snowboarding. I live in an amazing place for it and it’s pretty nice to have a hobby when I can’t be on my bike.” – John Bowman photo

(Laughs) No, I definitely wouldn’t say it’s important. I wouldn’t say it’s important to have a boyfriend in general, but if I was to be with someone it would, of course, be a bonus if we shared the same passion. Sometimes it’s a struggle being a single moto chick, just because I’m too small to lift my bike on my stand, but otherwise I’m pretty independent, as all us ladies should be! Who doesn’t love a moto boy though, right?!

I hope so! I want to have kids one day, in a very long time. I’d love for them to be into motocross and I will give them the opportunity, but whether they decide to pursue it or not will be completely up to them. Having a moto family is every girl’s dream, isn’t it?

I want to thank my mom, dad, and sister for supporting me through everything and always being there, and my lovely friends for being at the races, and making posters. I’d also like to thank Holly Macleod of H Macleod Construction for being a huge supporter of mine, as well as Reckless Behavior Canada for keeping me steezy, and SPY Optic, DeCal Works, ProTaper, Lucas Legion and Lifeproof. 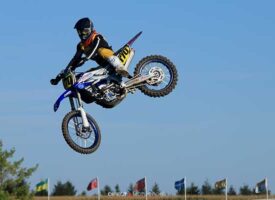 Monday Morning Coffee | What Happened at the 2022 MXON?