The second Anaheim 2 SX saw several top riders not make it through the night show. The track seemed extra technical and the first whoops section had most riders concerned during the Saturday morning track walk. There was a long lead in to them and they were quite big. Gauging entry speed was key.

Tyler Spikman was our man on the floor shooting photos of all the action. Here’s a closer look at the racing action from last Saturday night in California.

He fell in the tricky whoops section early in first practice and left the track on the back of the Asterisk Medical Mule.

He managed to come back out for timed qualifying but clipped a Tuff block and went down hard on his shoulder.

He still tried to line up for his heat race, and after a 4th place start was forced off the track at the end of lap one. That was it for the Canadian.

#40 Kyle Peters sits 8th in points after taking 10th in the main.

#42 Mitchell Oldenburg had the speed but not the luck at A2. He was at the back of the pack early and made his way up to 9th as he was passing guys left and right.

Colt Nichols has been impressive so far this season. He finished 8th.

#39 Jordan Smith is fun to watch because he always seems to be on the verge of something spectacular, be it a pass or a fall. He took 6th.

#58 Jimmy Decotis is ready to take a podium position very soon. He grabbed the SupercrossLIVE.com holeshot and said he “got a little pumped up.” He finished 5th.

#37 Joey Savatgy put himself in a great position in the main event but went down and had to scramble to 4th.

#38 Christian Craig had the crowd on its feet as he held off Cooper Webb while leading. They exchanged positions a few times with Craig eventually ending up 3rd. He said, “I had 10 good laps in me.”

#16 Zach Osborne seems to be the likely choice to steal a win in the west. He finished 2nd and said he “didn’t push hard enough when those guys were going back and forth.” In the background, I think you can see why #42 Oldenburg was so far back.

They said #1W Cooper Webb hasn’t led wire to wire yet in all his victories.

As fans, we are pretty glad he hasn’t because it gives us great races to watch as he starts picking off riders.

As Jeff keeps saying, it seems like he can put that Yamaha anywhere he wants…and it works. They said Cooper is the only 250 rider to win 4 straight races at Anaheim. Not bad.

Cooper has not lost yet this season and now has an 18-point lead. I think Cooper is doing a Carolina quarterback, Cam Newton, tribute move here.

Poor Trey Canard had another unlucky night. He crashed hard on lap 2 and was out for the night.

#55 Vince Friese will be back in Canada this summer. He went down in the 2nd set of whoops on lap 15 and was a little off the pace this week, finishing 16th.

#28 Weston Peick was back in action. He started way up in 4th place but faded back to 14th by the checkered flag.

I really want to know what makes #377 Christophe Pourcel tick. He sat back in qualifying then blasted out the 2nd fastest time. He finished the main back in 12th spot.

#12 Jake Weimer finished 10th in the main and is 9th in 450 points. It was enough to land him a fill-in ride for the RCH Suzuki team for the rest of the SX season.

#25 Marvin Musquin is slowly gaining speed in the premiere class. He finished 9th again last week, but came from way back in the pack. He’s 10th in points.

#18 Davi Millsaps grabbed the holeshot and ended up 7th at the flag.

#14 Cole Seely has had better finishes than 6th so it keeps expectations high for the Honda rider. I had my eye on him every lap because he was the only one doing the second set of whoops as two jumps.

Jeff has #21 Jason Anderson picked as the series champion. He’ll need some wins to move up from 3rd. He finished 5th.

#3 Eli Tomac was in the mix, moving up throughout the main. Unfortunately, he fell on the last lap and finished 4th.

#94 Ken Roczen finally put himself on the podium in 3rd as he moved his way up from around 10th. He was in the battle for 2nd late but messed up in the 2nd whoops with just 1 lap to go.

#22 Chad Reed is for real AGAIN this year! The end of the race battle between him, Tomac and Roczen was fun to watch. He’s just 13 points out of 1st place in the points and took 2nd at A2.

What can you say about #1 Ryan Dungey? He works hard and gets the job done.

He snagged another main event win and is fast-moving his way up list of winners. He hasn’t finished off the podium yet.

Poll Question: Who will win 250 East round 1 this week in Atlanta?

Thursday Wallpapers | Canadians at the Mini O’s | Presented by FXR 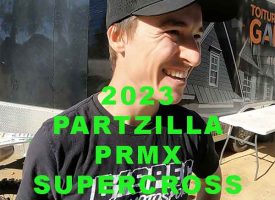