Canadian Motocross has a few very fast young riders to keep an eye on right now. Collingwood, Ontario, rider, #527 Jake Tricco, is definitely a rider on that list. Jake was down at GPF practicing for the upcoming season and then headed south to Daytona to race the RCSX this past Sunday and Monday.

We found Jake in the pits ready to head out at the end of a long couple days of racing to get his thoughts on how the amateur Supercross went for him.

We grabbed #527 Jake Tricco for a quick chat at the end of the final day of the 2016 RCSX at Daytona International Speedway. – Bigwave photo

Direct Motocross: Jake, you had a pretty good weekend here at the RCSX. You raced Supermini and Schoolboy. How did your Supermini races go?

Jake Tricco: Supermini was good. I got a pretty good start [in the main] and had some good battles with some fast kids and ended up with a 7th or 8th overall [he finished 8th in the Supermini (12-15) main] and I’m pretty pumped on that.

You were battling with some riders who’ve won races at some of the biggest events down here. How did it feel and were you comfortable?

Ya, for the first race of the year, against all those fast kids, it felt pretty good to start off like that and, hopefully, build on that for the season.

Jake finished 8th in the Supermini (12-15) main and then lined up against the Schoolboy 1 riders and placed 23rd. – Bigwave photo

The angle of the start gate made gate choice very important. Where did you line up for your best chance heading into that first left turn?

Close to the middle, it had a good sweep to it. The inside was like a little L so it was hard to get around and the outside was too far so the middle was good and I got a top 10 start, so it worked out.

The track got really beat up. Although they did some work on it throughout the day, it looked pretty rough. How was it?

It was definitely rough. I had a practice at 7am and raced at 4pm so it was really different from practice. It was really rough and everything was really chopped out, but the guys did a lot of work on the track during the day, so it wasn’t dusty and it was pretty good.

You were in the very last moto of the event. You lined up on your Supermini bike in the Schoolboy class. How did that go against the bigger bikes?

It was pretty hard. Those are the fastest kids around and I was pretty disadvantaged on the Supermini. It was hard on the start; everyone just pulled me. I had fun out there. I love it here.

How did you negotiate the first turn in the dust and into the sun? It must have been pretty scary, no? Did you just hold the throttle open and hope for the best?

Ya, it was pretty hard. The sun was coming over the stadium and I couldn’t see. I was getting roosted the whole time. It was just fun.

They’ll head to County Line then race the Loretta Lynn’s qualifier at Fast Farms in Tennessee before returning to Canada. – Bigwave photo

So, we’re here in Daytona. What’s been the most memorable part of this trip for you?

The racing! It’s so much fun to be here in such a big stadium. It’s awesome.

Were you thinking about the size of this place when you were out there or is it possible to just focus on the racing?

It doesn’t seem any different. It just seems like any other race, like I’m at a normal track.

So, what’s next for you guys? You’re pretty much loaded up here and ready to leave?

We’re heading to County Line tonight to do some training with the Motopark guys. After March Break, we’re going to Fast Farms in Tennessee for the Loretta’s qualifier. I’ll, hopefully, make it through there.

Where are we going to see you up north racing next?

Well, whenever the racing starts at home, I’ll be at the first race, for sure.

OK, well let’s let you guys hit the road, here. Good luck and thanks for talking with us and who would you like to thank?

Thank you. I’d like to thank my mom and my dad, Fox Head Canada, Fox Suspension, Shore Power Services, Subway, Atlas Brace, Motopark, Iain Hayden, Tom Hayden, and everyone, thank you so much. 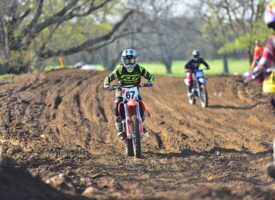 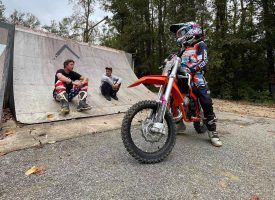 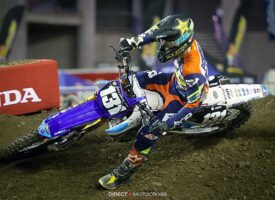 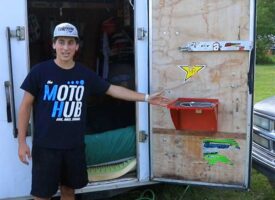 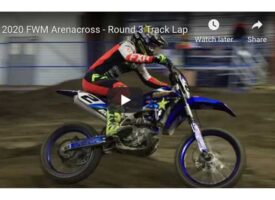 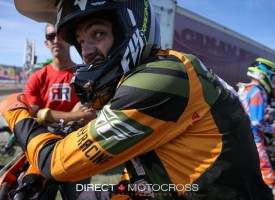