This weeks coverage is brought to you by Freedom Cycle in Halifax, Nova Scotia. Check them out!

I put on my cub reporter hat, grabbed y trusty pen and tiny note pad, and wandered the pits at River Glade MX here in Moncton, New Brunswick, to see what was going on with the riders and what everyone had been up to this week. Some riders had nothing of interest for us, while others had things that were at least interesting enough to snap a photo of and talk about here, now.

#3 Tyler Medaglia had his left arm checked out at the doctor’s this week. Although there are no broken bones, he had a deep bone bruise but said he’s 100% for this week.

#761 Cade Clason and #30 Kyle Keast rode the track Tuesday and then helped the track crew make a few changes. We’ll see how it races and what gets changed again after everyone hits the track for first practice Sunday.

The mechanics’ area has moved. There are no jumps where it used to be and now it’s over where they used to sell beer. It’s in a tighter, slower section that should let the riders see the pit boards better.

#475 Kyle Regal is not here this weekend. Word is he’ll be back for the final two at Unlverton and Walton.

This is what it was all about here at River Glade today. It was 28 degrees and sunny.

With the warmth, sunshine, and strong breeze, Earl Doucette (left) and the crew will have their hands full trying to stay ahead of the dust Sunday. They were forced to take lengthy water breaks today and the result was a day that ran until 7:30pm.

#26 Michael Da Silva (left) will be one of the riders racing both classes on Sunday. With a lighter-than-usual turnout, it will be a great way to snag a few extra points.

There a quite a few changes to the track for this year. The start straight doesn’t force you close to the tree-line anymore. Turn two will be where the action is this year.

We were really impressed with the speed and style of #57 in the Supermini class today.

These two young teens held this kiss for an almost Pee Wee Herman-like length of time. Long enough for me to first laugh, then say, “Come on,! then decide to take a photo and continue laughing.

If you’re looking to find the cleanest, shiniest bike in the pits, you’ll want to stop by RIcky’s masterpiece – Dustin Creson’s #444 Yamaha.

The ‘Klattapult’ as we know it is dead. They peaked the lip and moved it far enough from the corner that loads of amateur riders were doing it and still making the inside line in the corner with ease. Unless they ‘man this thing up’ for Sunday, it will have to go back to being called, ‘just another jump on the track.’

So, you’re wondering how #10 Nathan Bles will do on his 250 2-stroke in the MX2 class tomorrow? Well, he feels great on the bike except for he’s got the palm toughness of a photographer at DMX!

There were rumours circulating that #141 Eve Brodeur might line up and try to qualify for the Pro/Am MX2 class Sunday. She has teched her bike and with only 34 riders registered, we will have a female in the motos tomorrow! There are only 29 MX1 riders signed up. Where is everyone?

The choice around Brad Nauditt’s pit in mousse. Darren borrowed this fancy tire changer from the MX101 gang and looked pretty good with it. Need another tire iron there Darren?

After Colton Facciotti’s crash last week in Deschambault, he was left limping pretty badly with a nice gash to his shin. He said he’s fine and has been riding all week. Nothing to see here.

#24 Kyle Swanson has had a great week taking it easy at a water-front spot all week. Watch for him to come in rested and ready to go tomorrow. Will his top 10 streak continue?

After a bump on his noggin this week, #20 Dylan Wright has decided not to race this weekend. He’ll be back for Ulverton next week though. In his absence, mechanic Cale Foster contemplated hitting the track on this sweet 1983 Yamaha 250 2-stroke.

He’s still go it! #58 Mitch Cooke put it to the age group classes today and showed why he can still be considered the Canadian rider with the best style. When asked if he’ll line up in the Pro class tomorrow, he quickly said, “Eff no!”

After having a rather eventful final Intermediate moto on the track, #111 Alex Jeffery and the gang sat down for a little arts and crafts. Thanks for the delicious dinner, Redemption Racing. 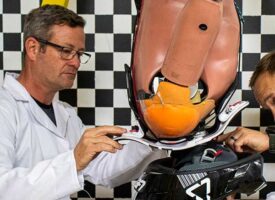 Podcast | Dr. Chris Leatt Talks about the Leatt Brace and…Everything We Could Think Of 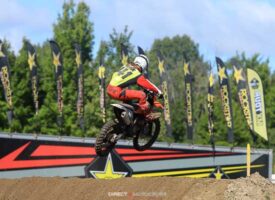 ICYMI | Catching Up with Jeremy McKie

On the Radar: The Barrett Sisters

On the Radar | Jacob Carney 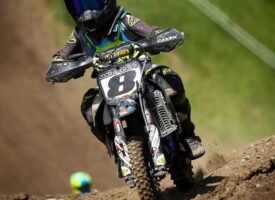