Donk (left) and Cole’s dad, Kevin, getting the bike set up in the Slaton Racing pits. – Bigwave photo

Round two of the 250 West Supercross is now in the record books. Canadian Cole Thompson is the sole rider flying the red and white flag, so we will continue to catch up with him each week following the weekend’s racing. Here is what he thought about his day at Petco Park in San Diego, California.

The Week between A1 and San Diego:

I rode my race bike 3 days last week…full days on it. I just got a little more comfortable with the bike and the set up that I was going to be racing on. Other than that, I just did my normal training during the week. And I just went over some video for the weekend.

When I went into the race day this weekend, I felt a lot better. Maybe my results didn’t show it, but just my actual on the bike/comfort feeling, I felt good.

It’s a nice track. It was just shorter than the usual west rounds. They’re usually over a minute. Even walking it, I knew it was going to be a short track. Once we got practicing, it was down as low as 50’s and then into the 49’s for the top guys. The racing went by really quickly last night – the heat races and mains and everything like that.

Right away, I felt good out in practice. I didn’t do too many changes. I just kind of stuck to what I was comfortable with riding the bike because I rode it all week. I think I ended up 11th overall in practice which isn’t great but, for me, I’m never very good at Supercross timed practice, so I was OK with that.

Cole was right behind Cooper Webb in his qualifier so I asked him about that:

I didn’t have the best start in the heat race but ended up finishing in 6th making my way through, making some quick passes. Cooper was right there in the heat race. The biggest thing Cooper has is his aggression. I mean, his lap times are the same, if not better than the 450 guys, so he’s attacking the track and he’s using ever inch that he’s on the ground, basically just charging charging charging.

That’s where I get more recognized as a 450 guy because I’m a little bit smoother and a little bit more laid back, maybe too much sometimes. He went by me and he was going at a different pace so it was a little tougher, but I definitely picked up on a few things he was doing. We were doing the same rhythms, but his corner speed and his entry to the whoops and in and out of all the sections were really spot on.

Even when I practice with him, he does things…nothing crazy, he just rides the bike really hard and really aggressive so he’s definitely on it.

I got another bad start, on my part, and then maybe just after the first lap I washed the front end. I was last starting and then I was REALLY far last and then made my way up to about 12th and pretty much just stayed there for the final few laps that were left in the race.

Over all, I felt good on the bike and I felt like I definitely have more to show. It’s just putting myself in a better situation at the beginning of the race to do good.

Cole ended up 12th in the main even in San Diego. – Bigwave photo

This week, I’m riding Monday, Tuesday, and Thursday and pretty much keep the same program going. I felt really good this weekend. As long as I can keep getting more comfortable with riding, and figure out my starts a little more, we’ll be good to go. 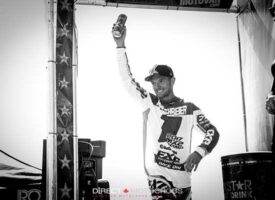 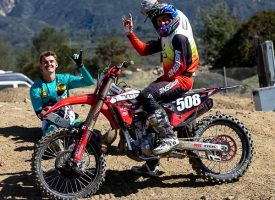