By now, I hope it’s safe to assume you’ve all had a chance to watch the racing on TV or the internet from last weekend at Ford Field in Detroit. Jeff posted his ‘McThoughts’ on the weekend and we’ve already put up our ‘Faces at the Races’ column, so here are a bunch of photos from the racing action last Saturday. Not all have captions, but where there is a story I’ve said a few words. There is no Supercross this weekend for Easter Weekend but the action will fire up the following week in Santa Clara, California.

I rarely get lucky with these shots.

#30 Shane McElrath finished 3rd in the main but was well behind the first 2.

It was too bad #66 Arnaud Tonus had troubles i the main because he was on pace all day. A win is coming.

There were 2 ways to approach the finish line in Detroit.

You won’t like him when he’s angry? Oh, he’s green? He’s big? He loves Lou Ferrigno?

#61 Gannon Audette was up to speed in Detroit and finished 6th.

So was #63 Jesse Wentland but he messed up in the main and had to fight back.

#128 Alex Frye qualified 11th and was doing well in the main (7th) until he had trouble.

#471 Logan Karnow was on the gas but just missed making the main.

His breakout race is coming…

#49 Martin Davalos has his work cut out for him after missing Toronto.

#6 Jeremy Martin had an off night in Detroit.

Anderson shouldered Grant out and moved ahead.

Going for the rhythm on the first lap is a scary undertaking…for everyone.

#41 Trey Canard earned some new fans but had a run in with #4 Blake Baggett after the mechanics’ area in the main.

#800 Mike Alessi looked strong all day and took 9th in the main.

Actually, so should #761 Cade Clason.

#466 Grant Ransdell was back in action.

#70 Tony Archer got together with Clason in the LCQ.

#19 Justin Bogle finished 10th in the main but should have been higher.

I tried to snap as many as I could in front of the sign.

Tuff Parker. That’s all you need to know.

#83 Daniel Herrlein won his way into the main and finished 14th.

Marvin Musquin feeling his way through the corner that would later cost him a position on the last lap of the main. Actually, he would have won!

Josh Grant would finish 12th in the main.

#4 Blake Baggett ended up back in 19th after rear tire troubles.

To blitz or to triple-triple was the question.

#63 Wentland in the thick of things.

#175 Paul Coates started the main up in 4th and finished an impressive 8th.

#201 had a lot of people wandering who it was and how to say it when they found out. Cedric Soubeyras from France was fast and took 9th in the main.

Coates over the wall that was altered for the night show.

#373 Jacob Williamson looked good with his new support from PR-MX and finished 16th in the main.

Davalos is now 5th in points.

Musquin leading Dungey into the 2nd corner of the main. Check out how hot Dungey is coming in!

#21 Jason Anderson assumed he was going to be 3rd on the night.

Chad Reed finished just off the podium in 4th.

Alessi gets a little dirt and rock shower.

This line got over-worked and fell apart in the main event. The smart riders made adjustments.

#27 Nick Wey finished 15th in the main after winning the LCQ.

Did you see the ghost push that tough block out in front of #10 Justin Brayton? Weird. He finished back in 18th.

See, even these guys end up in this position from time to time.

#801 Jeff Alessi wasn’t the only one skipping the whoop section every lap.

The checkered flag that wasn’t.

Give him a break, you don’t celebrate 3rd place at Anderson’s level.

Ready to blast off.

Thanks for looking. See you in Santa Clara! 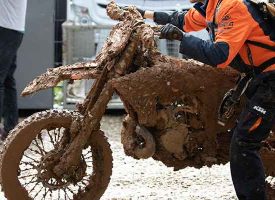 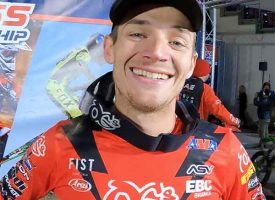 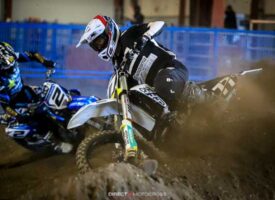