This past Saturday night, the 450 Class lined up for the 13th time. This was the toughest track yet, due to the ruts and soft dirt. Many riders struggled all day and night to navigate the obstacles, but it made for good racing. Ryan Dungey and Ken Roczen put on a very entertaining main event for all 20 laps. Unfortunately, Dungey has made some races a little less exciting, due to his pure dominance. This battle between the leaders was anything but. Let’s take a look at the results and see my thoughts:

1st Ryan Dungey: Dungey has nothing to prove. He could cruise to this title, but he isn’t. He and his team work too damn hard not to be on the top step of the podium every week. Some people say he’s boring. Well, if 29 career wins, 29 consecutive podiums, and 101 top 5 finishes is boring, then I want to be boring too. Dungey made a few uncharacteristic mistakes, but that just shows how much he was pushing. The track was very technical, but it didn’t slow Ryan.

2nd Ken Roczen: I feel this was by far Ken’s best race of the season. Yeah, he didn’t win, but that ride was fantastic. He never gave up and put on a great show for the fans. Nice to see these guys racing so hard and keeping it so clean. Very classy.

3rd Jason Anderson: Nice ride from 9th to land on the box. He was a mile off the leaders, but it’s another podium and he’s having a great season sitting 3rd in points. I sill think he’s the best passer in SX right now.

4th Trey Canard: No, it is not a podium, but that’s 2 good races in a row for Trey. I’m happy to see Trey on two wheels, and not on the back of the medic’s mule. Word is that HRC Honda has signed Cole Seely, and it looks like he will be teamed with Roczen, so Trey will most likely be the odd man out. He needs to finish the SX season strong and stay healthy for outdoors.

5th Blake Baggett: Best ride of the season for Blake. He was in 11th off the start which makes this even more impressive. You had to see this one coming with the rutted track and all. Blake seems to get better when the conditions are nasty.

6th Chad Reed: Reed started 12th and it took him a little bit to get going. Chad is probably not too happy with this 6th, but considering where he started, and the treacherous ruts, I think it’s a very good finish.

7th Christophe Pourcel: This is a great finish for Christophe. I was a little shocked to see Christophe set the fastest lap time with this being his first race back from a pretty serious injury and the fact that he had a big crash in the heat race. Nice to see the Frenchman put in 20 hard laps.

8th Justin Brayton: Justin has been on a good roll lately. He looks aggressive and sharp out there and has impressed me a lot.

9th Eli Tomac: Eli started off good, but it went all downhill. A 9th isn’t terrible considering a stall and a crash, but this is Eli Tomac. The same Eli Tomac that was unbeatable for the first few outdoor rounds last year. I don’t know if it’s the new bike or if he is still dealing with the shoulders from last year, or if there is a new injury, but this is not the Eli I was expecting.

10th Mike Alessi: Holeshot is back. Sure, he got passed 9 times, but he still beat some serious talent. I just hope he can stay healthy and put in a serious run for the 2016 MX1 Championship in Canada.

Biggest Stud: That was the best battle for the lead in the 450 class this season. It lasted the entire race, so Dungey and Roczen are both my studs.

Biggest Dud: The lappers were brutal. Not all of them, but most of them. You know you’re going to get lapped, move out of the way! Do not race them into the corners, let them go. Yes, those blue flags are for you!

Biggest Surprise: I was shocked to see how rutted it actually got. It reminded me of the old Toronto dirt from the early days, minus the rocks.

Thanks for reading and I’ll see you after St. Louis. 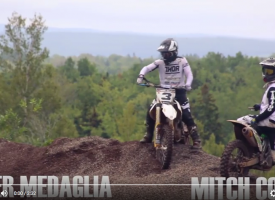 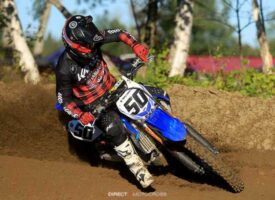