Welcome to another Monday Morning Coffee. Does anyone else have a hard time getting back to reality right after the Christmas/New Year’s break? There’s a large part of me that wants to continue celebrating the Holiday Season for a little while longer. Fortunately, we finally had some racing to watch and we’re less than a week from SUPERCROSS!

With so much other stuff going on in the news this past week, it was nice to be able to concentrate on some racing. We had the first two rounds of the 2021 Kicker Arenacross series in Starkville, Mississippi, on Friday and Saturday night.

I wish I could tell you the racing has been great and will only get better, but it really looks like defending champion #1 Kyle Peters is the class of the field. He’s managed to go undefeated in both Pro classes so far.

The main action seems to be behind him. A beef has fired up between #726 Gared Steinke and #800 Mike Alessi. Here is some video of the incident on the track:

Anyway, although I don’t think either of them meant for this to be the story of the weekend, it added some excitement to an otherwise runaway race night.

You can watch all the action live and in archives using the Flo Sports app from Flo Racing.

If you missed the racing, here’s what happened:

We were in the Mississippi State Horse Park in Starkville, MS Friday and Saturday night. Kevin Johnson is the guy in the booth calling the races and Kristen Beat is on the floor. This weekend was rounds 1 and 2 of 10.

#726 Gared Steinke went to the lead in the whoops as #800 had troubles. At the flag it was Steinke, Park, and Alessi.

Open Heat 1 – Off the start it was Steinke, Bitterman, and Alessi. Bitterman hit a lapper and they both went down, dropping him to 4th.

At the flag it was Steinke, Alessi, and then #59 Zack Gurley.

Open Heat 2 – This one was Peters, Teasedale, and Park.

The championship is a total of the 250 and Open points.

250 Main – Holeshot was tight between Peters and Steinke, then it was Bitterman, Teasedale, Park, and Alessi.

Steinke’s front plate kept bringing me back to 1982 when Yamahas had the radiator up on the bars and Kevin’s voice reminds me of Norm Macdonald.

At the half, Peters had a nice lead over Steinke and Bitterman, who had a gap on Park and Alessi.

One key was that Peters was hitting the triple, triple consistently as the track broke down.

Steinke messed up somewhere and dropped to 4th.

At the flag, it was Peters, Bitterman, Park and then a close battle between Steinke and Alessi.

Open Main – Teammates Peters and Park got out front followed by Bitterman and Steinke.

Peters bagan pulling away immediately as Bitterman and Steinke got around Park woh had Alessi behind him.

At the half, the field got spread out and it was Peters, Bitterman, Steinke, Park and then Alessi. And that’s how it was at the checkered flag.

250 Heat 1 – Hoelshot to Peters then Park and Bitterman. Park would get past Bitterman and then the two would come together and both went down, with Bitterman able to get going again quickly.

At the flag, it was Peters, Bitterman, a big gap back to Park.

250 Heat 2 – Steinke out front, followed by Teasedale and Alessi.

At the end of the whoops section after the first turn, Steinke would mess up and get out of shape bringing the top 2 riders together. Alessi would hit Steinke and put him down, taking over the lead (see video clip above).

At the flag it was Alessi, Teasedale, and a big gap back to #8 Zachary Butkiewicz.

450 Heat 1 – Holeshot to Peters then Park and Teasedale.

Teasedale would go down on lap 2 and fall back to 5th. At the flag it was Peters, Park, then Bitterman.

450 Heat 2 – Holeshot to Alessi then Steinke. Steinke tried an inside pass on Alessi but was unable to get it done.

At the flag it was Alessi and Steinke, then a gap back to Teasedale.

250 Main – Because Steinke had to go to the LCQ, he was lined up on the far outside and still managed to grab the holeshot ahead of Peters and Bitterman.

Early on it was Steinke, Peters, Teasdale, and Park, who made a quick pass on #79 for 3rd.

Peters was in the lead by the half and began to pull away from Steinke.

At the flag it was Peters, Steinke, and then a close battle between Bitterman and Alessi. Park went off the track and missed the finish line.

450 Main – Holeshot to Steinke, then Peters and Park.

At the half, it was Peters with a gap on a tight battle between Park, Steinke, and Bitterman.

At the flag, it was Peters, Park, Alessi (who made some bike changes after Round 1 and looked more comfortable), and a tight finish between Steinke and Bitterman.

The series heads to Lubbock, Texas, for rounds 3 and 4 this coming weekend.

There was some Canadian content to keep tabs on, too. #11 Connor Stevenson, who is from Milton, ON but now calls the Denver, CO area home, lined up in the Schoolboy and Collegeboy classes.

We did a podcast with him last week where we found out he’s now 16 and is 6-foot-4! He had the speed to take wins every time he was on the track, but he needed better starts.

On Friday night the classes were combined and we only got to see him on the track once.

He got out in 3rd place and made a nice pass into 2nd but it was too late to be able to catch the leader.

On Saturday he was out to 4th place in the Collegeboy main. 2nd and 3rd went down together and Connor squeaked by to takeover 2nd, which is where he finished.

In the Schoolboy main, he took the inside gate and got squeazed out down the start straight for 3rd.

At the flag, he had closed right in on the leader but ran out of time and took 2nd.

He looks great and is a rider to keep an eye on as he makes his way to the Pro ranks – a route that should see him make his Pro debut this August at Walton Raceway.

Full results from the weekend can be found HERE.

Rockstar Triple Crown Tour 250 Supercross champ Marshal Weltin was in action this past weekend down in Kentucky at the Tristate AX Series.

The organizers have said that they had some electronic timing issues so we’re not able to post results, but it sounds like Marshal took the W’s.

Canadian #134 Jess Pettis will take part in the Monster Energy AMA Supercross Round 1 virtual press conference on Tuesday. DMX has an invite to check it out so we’ll be watching and will be sure to ask Jess a few questions as he heads into Houston this coming weekend.

Also signed up for Houston is #551 Guillaume St Cyr from Quebec. He said he took a pretty hard crash on Friday but he’s still in for this Saturday. We’ll get an interview with him as soon as we can.

In Canada, head to https://www.supercrosslive.tv/ to get your Video Pass to watch all the racing live.

Here are the entry lists for Houston:

Anyone remember the Bob Barker scene from Happy Gilmore? (One of my many dummest questions ever.) And now does anyone remember the video coverage DMX did for the first couple Canadian National rounds from the 2015 season? Well, they were shot by my buddy, Mark ‘Hal’ Halliday, who just so happened to be Bob’s caddy in that now classic scene.

I knew him for years and never knew he was in this! I only bring it up because something came up on Instagram about this scene. Anyway, if you haven’t seen this, welcome to pop culture…

Greg Poisson and I did our annual Direct Motocross Awards (The DMXies) on Friday. We did it on Zoom video.

Congratulations to all the winners. If you haven’t had a chance to check it out, here’s the YouTube video:

If you’d rather the podcast, here are those links:

I’ll leave this week with a bit of a crazy story from this past weekend here at our house on the crescent:

After the AX ended, I heard a noise and assumed it was Emily getting up. She worked all weekend and had to be up early. I walked over to the stairs to meet her as she wandered around. Nope, it wasn’t her.

I sat back down on the couch and scrolled YouTube for a while and then heard the noise again. It turned out it was coming from out front of our house in the driveway.

With petty theft an issue in every city, I thought someone was trying to break into the cars so I decided I’d burst out trying to scare them and to “teach them a lesson.”

As I leapt out onto our front stoop, I found myself standing almost face to face with a huge male deer (a stag) who shuddered and stared straight into my eyes from, literally, 6 feet away! It had a pretty full set of antlers on it and was very intimidating from that close. As I tried not to soil my pants, he turned and wandered across the street, keeping his eye on me the whole time. He didn’t seem frightened at all. The same could not be said for me.

I grabbed my phone and shot a bunch of video right away. It turns out I fully goofed it and got nothing. I did manage to get this shot of him once he stopped across the street.

Have a great week and let’s all get ready to get back to some SUPERCROSS RACING this week! 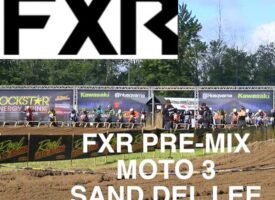 On the Radar: Mitchell Frank|Presented by RMR Online Outlet 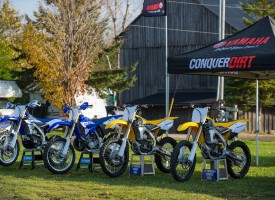