Victoria Day (in French: Fête de la Reine) is a federal Canadian public holiday celebrated on the last Monday preceding May 25, in honour of Queen Victoria‘s birthday. As such, it is the Monday between the 18th to the 24th inclusive, and thus is always the second-to-last Monday of May. The date is also, simultaneously, that on which the current reigning Canadian sovereign‘s official birthday is recognized. It is sometimes informally considered as marking the beginning of the summer season in Canada.

The holiday has been observed in Canada since at least 1845, originally falling on the sovereign’s actual birthday, and continues to be celebrated in various fashions across the country on the fixed date; the holiday has always been a distinctly Canadian observance.[1][2] It is a federal statutory holiday, as well as being a holiday in six of Canada’s ten provinces and all three of its territories. In Quebec, Queen Victoria is not honored; the same day was unofficially known as Fête de Dollard named for the hero of the Rebellion of 1837 until Quebec during the Quiet Revolution changed its name and later in 2003, when provincial legislation officially created National Patriots’ Day on the same date as Victoria Day.

There ya go. Now you know exactly why you’re hanging out at a motocross track or hitting the beach on a Monday.

I actually have the second motos playing on YouTube in the background as I type this morning. With a busy schedule on the final weekend before it’s time to head west for the start of the highly anticipated 2016 Rockstar Energy Drink MX Nationals, I didn’t have the chance to watch it live. Jeff McConkey will have his ‘McThoughts‘ for us here on the site, so we’ll leave this for him to talk more about later.

I just want to quote Grant Langston after Joey Savatgy went 1-1 in the 250 class: “Another product of the GOAT Farm.” Savatgy has been trained by Ricky Carmichael‘s mom the past 2 years. Safe to say, she knows how to built a champion!

I made the drive north from London, Ontario, up to the classic motocross track, Motopark, in Chatsworth for round 2 of the New Era Motopark MX Cup. It was a doubleheader weekend with round 1 taking place the day before.

The interesting thing about this event is that it is a ‘No Membership’ series which means you don’t have to pledge allegiance to any one sanctioning body or series – just show up and race! In these days of developing rivalries and battles for your amateur motocross racing dollar, this is a nice change of pace.

As I made the left turn off Highway 6 (an official blue government sign points the way) and onto the dirt road that takes you to the track, I was impressed by the fact that the entire ‘left’ side of the pits were full of trucks and trailers. Good sign!

As always, the crew at Motopark is there to help. Iain Hayden, Carl Bastedo, Zeb Dennis, Davin Grose, and Nick, were quick to take care of DMX and set me up with a little Yamaha TTR110 pit bike to get around the big Motopark grounds more easily. With the news that my right knee is officially ‘screwed up,’ being able to get around on a bike made all the difference in the world. I’m not even limping this morning, so thank you very much, guys. Unfortunately, Randy Wiebe saw it and now his ‘rider’ will include a bike or a quad at any race he covers in the future. Ha.

I was impressed with the small bu fast group of Pro riders who were lined up to challenge the Under 30 and Pro Am motos. Big Steel Box Fly Redemption Racing KTM rider, #15 Shawn Maffenbeier, is still in Ontario after heading down to Club MX for the team photo shoot and testing. Shawn is a real MX2 title contender, so anyone who wanted to run his pace (on a 350) was going to be extremely hard pressed to do so.

Saskatchewan rider, #15 Shawn Maffenbeier was the rider to beat on his KTM 350. Unfortunately, a flat tire dashed his chances|Bigwave photo

In a last-minute decision, #335 Joey Crown made the drive up from Michigan with his mechanic and lined up on his Monster Energy Kawasaki 250F. Joey is competing in his A class/Pro Sport season down south and is really trying to have a solid season so he can make the roster of a Pro team for next season. I spoke with him at the end of the day and he said that if that doesn’t happen, he’ll just have to do another year in the Pro Sport class. With a good year, he should be just fine.

#56 Big Steel Box Fly Redemption Racing KTM rider, Nathan Bles, lined up on his big 450 and took a run at both titles too. Nathan will be competing in the eastern rounds of the MX1 championship. With mechanic Josh Cox under the tent, it was funny to hear the conversation about how Josh’s then rider, Kyle Chisholm, took Nathan’s possible 3rd place finish away from him on the final lap a couple years ago at Ulverton. Motocrossers have great memories about things like that.

#713 Zeb Dennis runs the Motopark riding school, so yo know he has put in a few laps on this track. In fact, I remember watching Zeb get flat on the Yamaha off-road line up with lights and signals a few years ago on his home track. Bottom line, he’s really fast here!

This was also my first chance to watch #17 MX101 FXR Yamaha’s Dylan Wright race this season. Dylan was on his 250 so was sown a few CC’s against some of the others, but you know that will never stop this aggressive rider from giving his all, every time he’s on the track! He was scrubbing the face of the first step-down jump like he was mad at it!

When Dylan Wright is on 2 wheels, he’s as fast as anyone|Bigwave photo

Dylan’s MX101 FXR Yamaha teammate, Hayden Halstead, will drive the race rig west for the Nationals, and was at Motopark getting some seat time in and making a few changes to his set up.

You can check out all the results at the Motoparkracing.com website or just click HERE to be taken straight there.

#222 Kraig Reinhart took an extremely hard fall in his final moto right in front of me. It was on the far part of the track after the long double (inside line) down the hill. Things could have been worse but he was up and about at the end of the day and even asking me if I caught it on video. Unfortunately for him (fortunately for his family!), all I got was a big cloud of dust and his bike coming to a rest at the side of the track. I’m sorry…and you’re welcome. Glad you’re OK, Kraig.

I hope I’m not saying the wrong rider, but I think it was #209 Chloe Roberts who crashed off the start of her Ladies B moto and had to get medical attention. She looked like she was in considerable pain so I hope she’s doing better today.

OK, that’s all for Motopark until I have a chance to look at all my photos later. I also shot some video that I will have up on the site as soon as possible. Oh, and thank you very much for the coffee and delicious lunch, Lisa Snider. That new industrial oven and fridge are going to make a lot of people very happy this summer!

If this isn’t one of the most selfless things you’ve ever seen a couple Pro motocross riders do, I don’t know what is! Well done, guys. Team Canada and its fans thank you!

I’m sorry to report that the reason you saw BC’s #497 Brock Leitner‘s name listed as DNS in the 250 LCQ at Hangtown MX is for the reason you were afraid of. Brock got caught up in the first turn pile up that sent at least 8 riders to the ground.

When riders fell in front of him like dominoes, he had nowhere else to go and slammed into the downed rider in front of him sending him into the air. A rider ran into him and knocked the wind out of him. He landed hard on his shoulder and the end result of the impact is a fracture to the scapula (shoulder blade).

Brock wasn’t happy earlier in the day when he tried a practice start with the rear holeshot device engaged and so didn’t use it in the LCQ start. The front end came up on him and he was forced to feather the clutch to get it back to the ground. Doing so left him mired in the middle of the pack with few options into turn 1.

Brock said he was feeling great and was looking forward to a great Canadian season and added, “I ended last season with a broken scapula, and now I’m starting this season with one.” Brock will be at round 1 at Whispering Pines in Kamloops, BC, but, of course, will only be there as a spectator. They will seek another opinion but will likely be out 6-8 weeks while his shoulder heels and return for the eastern rounds, starting at Gopher Dunes.

OK, thanks for reading and enjoy this Holiday Monday! They say life’s a beach, so I’m off to live it. Next week at this time I’ll be somewhere between Ontario and Kamloops, BC. Have a great week and watch for some coverage from Motopark later here on the site.

If you’re old like me, you either went to school with this guy or you WERE this guy! Brad Coles of Label It! keeping it real. See you at the races…|Bigwave photo 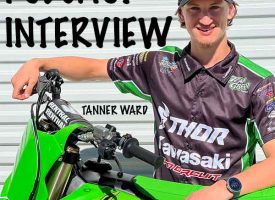