At the age of five I got my first bike from my Aunt and Uncle, a Honda 50. With them and the rest of my family, we would go on trail rides mainly in Ganaraska and Simcoe forest. I thoroughly enjoyed the trail riding but really pushed to get a race bike after looking through a couple of Mini Rider magazines and wanting to be just like them. My parents then got me a KTM 65sx, let me do a week long Motopark camp, and let me race the CMX Nationals shortly after. I’ve been hooked ever since.

At a young age there was nothing I liked more than riding and racing people on my bike, so all I wanted was bikes to be a huge part of my life and luckily it worked out that way. I tried playing sports like soccer, but my personal need to win didn’t make me a great team player.

I believe physically guys have a competitive edge against us but going into races in the Junior class I knew if you push hard and want to win bad enough anyone is beatable. Also, lady racers have their own class as well where it is an even playing field. So no, I don’t believe it’s harder for women to compete in motocross, we have our own class and even when racing the other classes, everyone is beatable.

Biggest accomplishments? “Winning the 2010 Ladies Motocup, getting the holeshot at the Ladies Pro National at Gopher and winning a few of the Ladies ANQs.” – James Lissimore archive photo

Chuck Mesley is my favourite rider to watch at the track. After watching his speed and domination in a race at RJ’s, I’ve been a fan ever since. I was also impressed at his podium speeches as Walton when he thanked his sponsors, “Me, Myself, and I”.

Heidi Cook I believe was the lady racer that really helped grow the ladies class. She had such raw skill and had the aggressive style where she raced like one of the guys. During my racing career I really looked up to her and hoped one day I could get to that skill level in racing.

My favourite Canadian Pro is Hayden Halstead. He’s a privateer that continues to manage to make it out to the Canadian Nationals and seems to have fun doing it. Hayden has a lot of fun at the track, gave me massive props when I cased the finish line jump at Gopher Dunes. It was my first attempt but I underestimated my engine brake.

My favourite track is Motopark. Ian Hayden makes sure the track is prepped and ready for practice and race day and it’s my home track. I always seem to have my best races there because the track has a nice flow to it and the jumps suit my style the best.

My hero is my dad, because he has always been there throughout my racing career and with that I can say I had an amazing childhood with some great memories to look back on.

My goals for this season are to successfully complete my 4th semester of college and really focus on mountain biking.

Winning the 2010 Ladies Motocup, getting the holeshot at the Ladies Pro National at Gopher and winning a few of the Ladies ANQs.

My favourite part about going to races is racing. I love the adrenaline feeling I get when I’m waiting for that gate do drop. That moment when I get the holeshot or winning a race after a long battle with someone is really rewarding. I love competition. Having time to spend with my friends and family is a huge bonus.

Now that I’m not racing, I enjoy mountain biking, both cross country and downhill, along with playing squash.

These days, Maddison can still be found ripping up the trails, but on non-motorized mountain bikes. – Jennifer Geortzen photo provided by Alcock

I’m not sure about that. At this point, I think I would push them more to pursue mountain biking, downhill or cross country, but I feel that if they really wanted to get into motocross, I would support them. 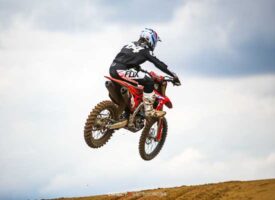 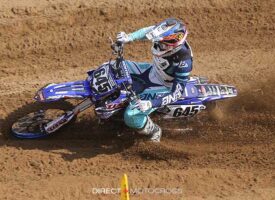