A rather forgettable season came to an unfortunate end Saturday at Round 5 of the 2020 Rockstar Energy Triple Crown Tour MX Nationals for #157 Wyatt Waddell.

It seems like it’s been one thing after another for the rider from British Columbia, but this one was different.

After Wyatt crossed the finish line to complete the first moto of the fifth round at Sand Del Lee, he was heading off the track when there was a bit of a log jam as someone in a mule was heading in the direction of the podium.

Wyatt got squeezed out and sort of ran into #325 Tallon Unger and #164 Ryder McNabb who were also caught unready for the appearance of the side-by-side.

Wyatt caught his throttle hand against the vehicle and was in immediate pain. He went to the hospital to get it checked out. Here’s a look:

“Headed to the hospital directly after the incident and got 9 stitches in my finger. Hand is sore but no breaks. Likely not lining up tomorrow unfortunately,” Wyatt said.

He added, “Yeah, pretty disappointed in the decision making there. It’s been a tough season as it is so I’m ready to put 2020 behind me and move forward.”

Tough break, Wyatt. Heal up and we’ll see you soon. 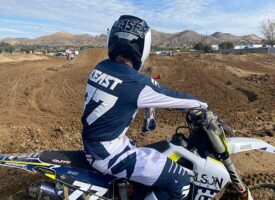 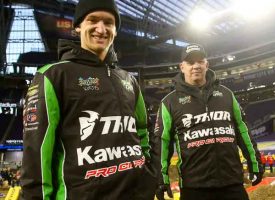