We all remember where we were when we learned of Blair Morgan‘s crash and subsequent paralysis. Blair fell in a seemingly innocent section of the track at the 2008 Montreal SX. I was at the race and couldn’t believe it had happened the way it did. When the news came out that he had suffered permanent spinal cord damage, the sport reeled and took a collective deep breath.

Blair is a huge part of Canadian Motocross (and Snowcross) History. He is truly a rider any aspiring young racer can look up to and pattern him or herself after. He’s loved and respected around the globe and when this Ride Day was organized, there wasn’t a moment of consideration as to whether I was going to attend or not.

Here’s a look at some of the riders who helped organize and participated in this unfortunate but uplifting day in support of Blair ‘Superman’ Morgan.

According to the meta data on these photos, it was October 17, 2008. There were tons of really cool items being auctioned off in support of Blair Morgan.

People lined up to bid on everything that was there. It was pretty touching.

Colton Facciotti made the drive to Motopark up near Owen Sound, ON to take part in the ride day.

Californian Sean Hamblin was the guy behind the day and put on a great riding school along with some other Pro riders for a great group of racers.

Here’s Sean going over some line choices and when to sit down and stand up in a particular section of the track.

Look at the size of a much younger #111 Brad Dool! According to his dad’s Facebook page, he’s now getting into road racing.

Here’s Sean giving an example of where to go and how to position your body properly.

Both Jeremy Medaglia (left) and Tyler Medaglia were there to help out too.

Here’s Tyler running the big #13 proudly. He says he wanted it for his career number.

Here’s Jeremy airing it out over the finish line section just after Kyle’s Chasm or Stephens Step or simply That Really Huge Jump at Motopark.

The #1 belonged on Colton’s bike so a little electrical tape was called into action.

If memory serves, these two guys had some serious tight riding out on the track that left them crossing each other off their Christmas card lists.

Jeremy on his Suzuki.

It was a great day that raised some money and let Blair know he was in our thoughts…and still is. On behalf of all of us here at DMX, I hope you’re doing great, Blair. 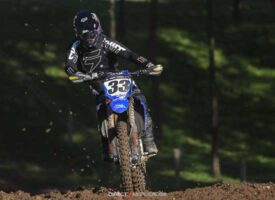 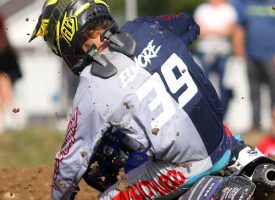