New York State rider, Bobby Kiniry, has become a sort of an honorary Canadian due to his racing our Rockstar Energy Drink MX Nationals for so many years. There may even be some younger spectators out there who assume the 29-year-old is actually from somewhere in Canada. Well, he’s actually from Holland Patent, NY. It’s a small town in Upstate New York. It sits straight south of Kingston, Ontario. It’s east of Syracuse (where he was born) and just north of Utica.

It was week #7 for the Frid’Eh Update this past week, but we were unable to get in touch with Bobby before our 4 o’clock deadline. We wanted to chat with the friendly American to get caught up on what he’s been up to since we last saw him at the final round at Walton Raceway and find out what his future plans are. Here’s what the always-accommodating Kiniry had to say.

Hello, Bobby. Since we missed you on your Frid’Eh Update day #7 we wanted to quickly catch up with you. This is a big question, but what have you been up to since we last saw you in Walton?
Since the last outdoor race at Walton I tried to keep myself on the bike and racing. For the few weeks after our national series I raced a few races at some great local tracks that we have here in New York, just over the border, before heading to California to prepare for the Monster Energy Cup where I ended up breaking my hand. That injury set me out for about 8 weeks.

Once my hand was all healed up, I headed to Germany for a few Supercross races. It was good to get right back into racing after that hand injury; I don’t like to sit around and not race. When I got home from Germany I had a new Arenacross team approach me about coming on board for the upcoming season on a Yamaha. I was very excited at the opportunity to get into that series, knowing that it would be on a bike I already have been competing on and with good success. I also knew that I was going to be learning a lot in terms of racing in that series, which I since have. The last few weeks have been great for me in the Amsoil Arenacross Series with results consistently on the podium and my first win.

What team are you riding for in AX?
The team I am racing for in the Arenacross series is a first-year team with a guy named Junior Jackson in charge that has won a number of championships both as a rider himself and on the mechanic end. The team has a number of great sponsors that have really stepped-up big for us and want to see both the team and sport grow, and I couldn’t be happier to be involved with people like that. Some of the sponsors getting us there are:
Thermo-Tec
FMC
Yamaha
Cycle North
OTSFF
Moto Option
Rockstar
Dunlop
Bills pipes
I hope every one will go and check out some of these great sponsors for us and help the people that are helping us put this show on the road.

What are your summer racing plans? Did you read the Frid’Eh Update? Andre seemed to indicate that you aren’t 100% racing for the Rockstar OTSFF Yamaha team?
My plan for the summer is to come make another run at that Rockstar Energy Drink MX Nationals MX1 championship.

Can you run the pace of the top outdoor guys like Metcalfe, Goerke, and Facciotti?
This coming summer will be the most interesting outdoor series in Canada that there may ever be with a number of guys that I feel can win a championship. You have a list of names such as Medaglia, Thompson, Facciotti, Keast, Metcalfe, Maier, Goerke, Bles, Alessi and more that have all shown they have the speed to win. I do include myself on that list as one of the people that can win for the simple fact that I have the trophies in my trophy room to prove that I can and do run that same pace that they run year after year, and I don’t see why that is going to change.

Bobby has run the pace of the other top riders in Canada and expects more of the same in 2015. – Bigwave photo

What Canadian track are you always looking forward to?
I really look forward to Gopher Dunes, (Balckfoot MX Park) Calgary, and Walton (Raceway). Although, I really do enjoy them all.

What Canadian track do you always dread heading to?
The track that would be on the bottom of my favored list would be (The Wastelands) Nanaimo, just because I seem to have a hard time with stringing lines together there. The track is not bad, it’s just me. The people there are great and it has a beautiful setting. I just struggle on the track itself.

How many more years of racing do you think you have in you?
I feel I have a lot of good years left in me. I’m only 29 and I see Mike Brown still at it hard and very competitive in his mid-40s with no sign of stopping. I don’t see why that can’t be me. I love racing and always will. It has given me a great life that I’m very thankful for.

What will you do when you finally retire?
This is a good question. I have given this a lot of thought and I don’t quite have a answer for you just yet. I have a few offers every year to stay in the industry and go that route, and being that motocross is the college that I went to I’ll likely go the moto industry route.

If you’ve never watched Bobby’s pre-race ritual of imagining the gate drop, you should. – Bigwave photo

Cairoli or Villopoto?
Villopoto. How many times has he throttled the Euros at the Des Nations??? A few…I’ll go with him.

(Laughs) Surprise me. I don’t care.

Thanks for doing this, Bobby…err, Bob, and good luck with the rest of the season. Hopefully, we’ll see you down at GPF when we get there next week.
Thank you! 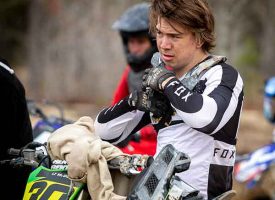 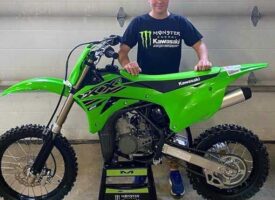 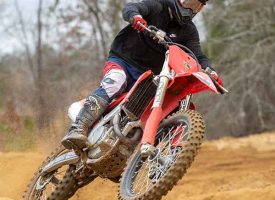