Round 3 of the 2015 Rockstar Energy MX Nationals took place at Wild Rose MX Park in downtown Calgary, Alberta, this past Sunday. Riders were looking forward to the jumpy and fun track that some described as the first ‘real’ national-calibre track of the season.

The weather was brisk, to say the least, and hovered around the 10-degree Celsius mark. It rained at one point and the wind kicked up the hard-packed track’s dust late in the day creating added difficulty and risk for the racers in their second motos.

Here’s a look at the racing action from the lens of Clayton Racicot:

In MX2 racing, #1 Royal Distributing Fox Racing KTM rider, Kaven Benoit, held the red pate as points leader. Being a clay-based, hard track, he was supposed to have his hands full with the 250 2-stroke.

Wild Rose has the second and final cement pad starting area that always creates interesting photos as they warm their tires and lay down a patch of sticky rubber.

#17 Redemption Racing Fly Dragon KTM rider, Seth Rarick, got off to a rough start in moto 1. After this crash, he had banner and bits caught up in his wheel. He came into the mechanics’ area for assistance and then tried to rejoin the moto. He puled off shortly after, taking a DNF for the moto…not to mention almost hitting Clayton!

He regrouped for the second moto and battled hard to a 7th place finish for 15th overall.

American rider #444 Dustin Creson had a strong first moto, finishing up in 8th, but then had troubles in the second and was scored a 35th for 17th overall.

#51 Brock Leitner was back in action after his ankle injury at Round 1 in Kamloops. 14-20 put him 19th overall.

#29 Duroy Racing KTM’s Jeremy Pronovost put his vision-related troubles from round 1 behind him and finished 13-18 for 14th.

#39 Vernon Motorsports Yamaha rider Jess Pettis was on a charge in around 9th spot on the final lap of the first moto when he lost his front end and went down hard. He managed to pick himself up and finish in 16th. Unfortunately for the Prince George, BC native, he was unable to finish the second moto and his 16-DNF gave him 21st overall. He’s due for a solid top 10 result soon.

#762 Devil’s Lake MX rider Blake Savage had the speed to be on the podium, but his mechanical troubles in the first dropped him to 35th. His solid 4th in the 2nd helped him to 13th overall.

#57 Todd Minnie was finally able to put 2 solid motos together without incident and his 12-16 moto scores gave him a well-deserved 12th.

It was great to see #90 Jared Stock back on a motocross track on his enduro-ready Yamaha. He got out to a 4th place start in the second moto and finished 15-13 for 11th.

#620 GA Checkpoint Shift Yamaha’s Brad Nauditt sat in 5th for a long time in the first while trying to hold off #20 Dylan Wright on his way toward the front. Brad would finish 6-11. He was under fire the entire 2nd moto and took 7th on the day.

#14 Rockstar Energy OTSFF Yamaha rider Shawn Maffenbeier got up into 2nd on the 3rd lap of the 1st. He was also up in 3rd in the 2nd but had issues and fell way back on lap 5. He charged back and took 5-9 motos for 6th.

RMX Strikt Racing rider #9 Morgan Burger had a solid day in Calgary. He seemed pretty satisfied with his 7-5 motos and took 5th overall. He ended up riding alone in the second after a good battle with Savage.

Had to go with a scrub shot of #20 Canada’s Motorcycle FXR Racing Yamaha rider Dylan Wright. He bumped with Medaglia early and would not be denied that 3rd spot on the 1st moto podium. It was an impressive ride by the sophomore Pro.

He was dead last and way behind at the start of the 2nd but put his head down and clawed up to 6th by the checkered flag. His 3-6 motos gave him a physically-draining 4th overall.

Like a few other riders, he’s looking forward to the softer tracks of the east when we head that way in July.

He got away early in the first moto and noted that he and Kaven Benoit satyed the same distance throughout the moto so he knew it would be about the start in the second.

He got out in second place in the 2nd moto and stayed there. His 1-2 motos gave him 2nd place overall and he gained some points on Medaglia in second in the standings.

The holeshot was all Benoit needed in the second to build a lead and hold in throughout the 2nd moto.

At the flag, Benoit had a nice gap over Decotis in second who then had a lead over the next 3 riders who were also quite spread apart.

Kaven getting his air time.

#26 Michael Da Silva’s up-and-down season continued with a DNF in the first moto. In true Da Silva fashion, he shrugged it off with a forced smile and went out for the 2nd. He was in a group that was running very similar lap times and finished 25th for 27th overall.

#35 Matt Davenport was in the mix most of the day and with a good start will be much higher in the results than his 20th (21-16) Calgary finish shows.

Washington State’s #476 RMR Fox Shox Husqvarna rider Collin Jurin was back in Canada and had a solid first moto for 12th after a solid battle with Kyle Keast and Brock Hoyer. He was way back early in the 2nd and managed 12-20 motos for 16th.

#23 RTR Performance DS Moto Customs FXR KTM rider Dylan Schmoke is putting together a solid run in the MX1 class and rounds out the top 10 in points. He finished 14-17 for 15th.

The friendly rider from Utah, #42 RMX Honda’s Riley Brough has shown flashes of blazing speed this spring. His 18-10 motos put him 14th.

With a little more time near the front, #55 Keylan Meston is going to be a threat. He was in a good battle with Jurin, Scott Champion, and Hoyer at the midway point of the first. 13-14 gave him 13th.

FXR Timbersled Yamaha Canada’s Brock Hoyer rode hard and was in the mix both motos. His 11-13 gave him 12th.

#123 Monster Energy Thor Kawasaki’s Brett Metcalfe made things interesting at the top of the points when a mechanical took him out of the first moto Sunday. He came back and put in one of the more impressive rides so far this year from just inside the top 10 to take the 2nd moto win. His DNF-1 gave him a rare 11th overall and he’s now 4th in points.

#7 Rockstar OTSFF Yamaha’s Bobby Kiniry was back in 15th in the first moto and fought hard for 8th. He got great start in the 2nd but then this tip-over collected Teddy Maier and dropped him a few spots. His 8-12 put him 10th.

I don’t know a whole lot about Scott Champion but it was cool he came up to ride on the Strikt Racing Yamaha team for the round. He said he enjoyed it and would like to do another round or two up here. He finished 9-11 for 9th.

#30 Honda Canada TLD GDR rider Kyle Keast had to move forward both motos. He was in some heated battles with Brough, Champion, and Hoyer. 10-9 gave him 8th.

#3 Parts Canada Thor Husqvarna’s Tyler Medaglia was on his own a lot in Calgary with gaps both ahead and behind him. He finished a solid 7-7 for 7th overall.

#5 Monster Energy Thor Kawasaki’s Teddy Maier was always right there Sunday but didn’t have the results he would have liked after falling in the 2nd moto. His solid 4th place in the 1st moto gave him 6th (4-8).

I think everyone was impressed with Redemption Racing Fly Dragon KTM rider #761 Cade Clason Sunday. His 2nd moto battle with Friese was a good one! Words were spoken afterwards but nothing developed. He took 5th overall with 6-5 motos.

#101 Rockstar Energy OTSFF Yamaha’s Matt Goerke had his lens blow in during his charge in the first moto and could barely see. He said he didn’t realize he was up in 2nd because he couldn’t read the pit board! He had a good battle with Friese and Clason in the 2nd moto but a fall put him back in 6th.

His solid 2-2-4 overalls will see him running the red plate this week in Regina.

Defending champion, #1 Honda Canada TLD GDR’s Colton Facciotti, ran some of the fastest laps of the day Sunday. He started outside the top 10 in the first and then looked like he could win the 2nd in a great dog fight between the top 4 riders. 5-2 put him 3rd and he sits 2nd in points, just 1 up on Cole Thompson.

#148 Royal Distributing Fox Racing KTM Canada rider Cole Thompson held the lead for the first 4 laps of the 1st moto, He was in the dog fight for the lead in the 2nd moto and finished 3-3 for 2nd place.

#12 Smartops MotoConcepts rider Vince Friese set fastest qualifying time by 2 seconds in Calgary, so nobody should have been that surprised by his race speed.

After a tumultuous 2014 in Canada, Friese returned and simply took care of business in the MX1 class. He won the first moto by 2 seconds and then was in the mix for the win in the 2nd before a fall somewhere in the Shaw Valley dropped him to 4th. 1-4 gave him the overall.

Goerke after his first moto 2nd place. He was late arriving as he rinsed his eyes out.

A relieved Brett Metcalfe after his impressive 2nd moto ride for the win. He laughed that “you can’t get a good start from 35th gate pick!” and that they suffered an “uncontrollable part failure in moto 1.”

Facciotti on the podium. He said he was happy with his speed but needs to focus on the first couple laps and get better starts. He said he was also impressed with some of Metcalfe’s lines.

Thompson getting his TV time. He said it “was clear I wasn’t the fastest guy” and that “to be in it every moto is the plan.”

The champagne spray! We now head to Moto Valley in Regina, Saskatchewan, this coming Sunday. See you at the races… 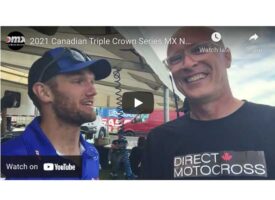 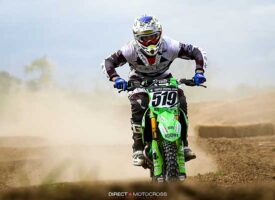 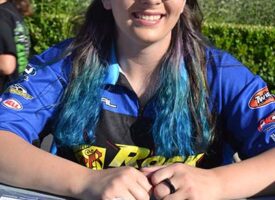 Out of the Blue | Jaden Carlson | Presented by Schrader’s