In case you didn’t get a chance to read our conversation with Jimmy Decotis in last week’s Frid’Eh Update, it’s worth a read:

Welcome to week #12. Unfortunately, it’s looking like we won’t be seeing Jimmy Decotis representing the ‘one-two’ this summer in the 2016 Rockstar MX Nationals. Jimmy surprised a lot of people last spring when he came to Canada to compete in the 2015 MX2 championship chase. It was a really big deal for the Canada’s Motorcycle FXR MX101 Yamaha squad to land such a well-known rider.

Jimmy had a reputation of being blistering fast but not in the greatest shape for the grueling demands of Professional outdoor motocross. He made good on his promise to change that situation and came into the season fit and ready to take on all challengers.

He left Whispering Pines in Kamloops, BC after round 1 with 1-1 moto scores and the red plate heading to the Wastelands in Nanaimo, BC the following week. He’s a well-known animal in the sand and the Kamloops track wasn’t supposed to suit his his strengths. MX101’s Kevin Tyler had a good time walking around sarcastically saying, “He’s just a sand guy!”

Jimmy Decotis left round 1 in Kamloops with the red plate. – Bigwave photo

When the dust settled at Walton Raceway in August, Jimmy finished in 2nd place behind Benoit. He then went to the Geico Honda team to race 250 West Supercross and this is where the story gets interesting, as far as his possible return to Canada goes. We grabbed the friendly New Englander for a chat yesterday to talk about all of these things. Here’s what he had to say.

Direct Motocross: Hello, Jimmy. Let’s back up a bit first. Can you tell us a little bit about your yourself?

Jimmy Decotis: I started riding around 4 years old. I got into the sport very young. My dad and older brothers raced so of course I wanted to follow in their footsteps. I grew up living in the New England area with Florida trips during the cold winter months. I always enjoyed racing. I raced every weekend during the summer chasing the NESC series. As I grew up, my dad never pressured me or pushed me to get better, it was something we enjoyed doing and we kept it fun.

A lot of people were surprised to see you actually show up in Canada at round 1 last year. How did that whole deal come together with the MX101 gang?
I heard through the grapevine that MX101 was looking for a guy. I contacted Kevin Tyler and told him I was interested. I had a SX-only deal lined up and my summer was still in limbo. I contacted a few close friends up in Canada and they all believed it was a good decision and fit for me to go up to Canada and ride for the MX 101 team. They have a solid program, good bikes and good people – what more could you really ask for? We did a test down at South of the Border Training Facility and I was happy with the bike and we moved forward from there.

The Benoit/Decotis battle at round 5 Gopher Dunes was one for the ages. – Bigwave photo

Taking your goggles off at The Dunes is rarely a good idea. – Bigwave photo

This is usually the best case result. – Bigwave photo

What was your impression of Canada and the Canadian series?
The Canadian series was such a cool experience for me. I was welcomed in with open arms from the teams to the promoters and all the fans. It really was one of the best summers of my career. Some of the tracks were a lot different than what you’d see in the states, but overall the series was a success and I’m thankful I got the opportunity to race up north.
What was your favourite track last summer?
My favorite track last summer had to be Sand Del Lee (MX101). I may be a bit biased tho (Laughs). I really enjoyed the track. I also enjoyed Gopher Dunes and Kamloops.

“I left everything I had on the track and so did Kaven. Although that weekend we got protested by the KTM team, me and Kaven both left that round with more respect for each other than when the series started. ” – Bigwave photo

What was one thing you noticed different in Canada from the USA?
The biggest difference was the tracks and atmosphere. It’s obviously not as big as some of the U.S. rounds so the series seemed really laid back. I enjoyed that aspect of the series. The tracks weren’t tilled as deep or watered as much, so it opened up the layouts and made for great passing. Sometimes in the states the water and tilling really makes the tracks one-lined.
Now, you’ve been racing the West 250 SX series. How has that been going?
The west coast 250 series has had its ups and downs. I started out the series extremely well I was strong fast and fit. Unfortunately, I got really sick in between rounds 3 and 4 – I had the flu. As soon as I got over that I got bronchitis because I didn’t listen to my body when I was sick and continued training. It was a bummer because I worked so hard in the off season racing down in Australia and putting the miles in on the road bike. I felt back to normal for round 7 in Arlington but a bad start cost me huge. I really want to stand on that podium, so anything but top 3 was a bit disappointing.
What have you been doing over this little break?
Since the break started I took a week off to rest my body and then I’ve been straight back into the program. I want to make a solid impression at the last 2 rounds for myself and my team so it’s been crunch time for me. I actually just got back from a 4 day trip to Texas with the whole FC Honda team. We did testing and scrimmages together to see how our bikes are under race conditions. It’s really cool that our team invests so much time and effort to make sure we have the best possible setup come race time.

#58 Jimmy Decotis is competing in the 250 West SX for the Geico FC Honda team. – Spikman photo

Where do you hope to finish this SX season?

I really wanted to finish the season in the top 3 but for now I sit 6th with 2 rounds to go. A top 5 overall would be nice and 4th is within reach, so if we can get up to that 4th spot it will be a career best for me and more steps in the right direction.
There was also talk that you were wanting to return to Canada in 2016. I guess it can’t happen due to your Honda contract? What will you be racing this summer?
This summer is still up in the air for me. I’ve struggled with arm pump in my last few years of racing so I may get arm pump surgery and hopefully return for the last 4 or 5 U.S. Rounds. I plan to stay with the Geico Honda team for 2017, although I haven’t signed a contract yet. I’d love to be back here for a full season next year.
What if a team had a Honda for you? Would you come north?
I’d possibly do a deal on a Honda. Like I said before, I plan to be with the Geico Honda team for 2017, so a brand change for the summer just wasn’t in the cards. My initial plan was to continue with the MX101 team for 2016 nationals but with talks of staying with Geico for 2017 that plan didn’t work out. I really enjoyed my time with the MX101 team so I’m a bit bummed, but I wouldn’t want it to jeopardize my chances for another season on the Honda brand.

Good luck in the rest of the SX season, Jimmy. – Bigwave photo

You and Kaven Benoit had some great battles. What stands out the most for you?
Our battle at Gopher Dunes was one of a kind, although we didn’t pass each other much that moto tested both of us. We charged for 25 minutes plus 2 laps all out. I left everything I had on the track and so did Kaven. Although that weekend we got protested by the KTM team, me and Kaven both left that round with more respect for each other than when the series started.
Well, thanks for chatting with us today, and we’ll see you in Santa Clara. Who would you like to thank?
I have to thank Johnny, Kevin, Pete, Cale and the whole squad at MX101. I wouldn’t be in this position I’m in if they didn’t give me a chance last summer. Also, a big thank you to the FC Honda team for all the help this season and giving me the best equipment I’ve ever ridden. My mechanic Keith puts in lots of work during the week so I have to give him a shoutout! Look forward to seeing you in Santa Clara and hopefully I have a trophy in my hand by the end of the night.
Tagged 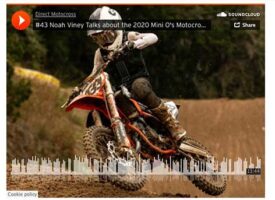 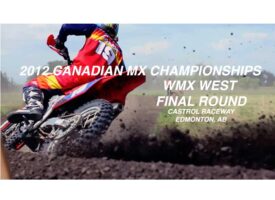 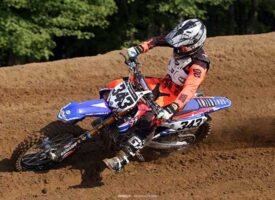 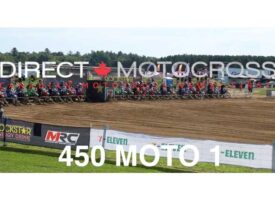 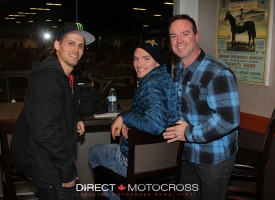