The Daytona SX has come and gone and we were there to check it out in person. There is a pretty good chance we were treated to the best 2-main evening we’ve seen in a very long time. With 4 riders going for the win in the 250 main and Eli Tomac and Ryan Dungey bar to bar for the entire 20-lap 450 main, it was an amazing night of racing.

I’ve finally had a minute to sit down and look at some photos from the day and night at Daytona International Speedway and you can have a look at a bunch of them here. These aren’t shots of racing action but instead are shots of people being people. Here are some of the many Faces at the Races.

You had to get there early if you wanted a good spot on the big bank of the speedway.

Imagine if they weren’t together? What a coincidence.

Is this a hippy, a hipster, or Teen Wolf? This question has the guy on the right going nuts.

Tailgating without the truck.

You just know that’s his go to ironic shirt.

Hanging on for a long day.

I don’t know whose vehicle this is but apparently they get the munchies.

These guys have the chillest set up in the Pro pits.

Yep, they actually looked like this when I started racing.

I assume he was trying to bracket the entire scooter. Next year…

Welcoming everyone to the show.

Time for the rider intros. The top 10 450 riders get intros.

Since I missed track walk in the morning (long story), here are the intros they don’t show on TV.

Is he doing a burnout, on fire, or is Jeff Spicoli behind the curtain?

Ryan Dungey about to tie the all-time podium streak record.

Did this guy just start a streak?

Caught the 30-second girl taking a selfie and going with duck lips. Is that still a thing?

Sometimes you’ve got to stop and smell the roses…or palm fronds.

Alex Frye after his get-off.

Celebrating after an amazing race.

There was a lot to talk about.

Josh Grant returning to the show.

Canadian Dave Blanchet going for it in the premier class.

Vince Friese having a discussion with an official.

Ryan Smith snubbing his nose at the establishment.

Logan Karnow and his Canadian set up.

Josh Cartright made his second main and was pretty happy about it.

Malcolm Stewart is definitely due for a win.

Time for a few pit boards…

That’s the same pit board he shows him before they go out on the town.

Not the way I ride!

Guy B from Vital MX.

James Stewart trying to get focused.

These guys are destined to have some great battles.

He wants answers not questions.

Great job on the microphone throughout the long day.

She’s the one I saw speed-reading poetry Monday.

Keeping a close watch on the red bikes.

“The kitchen sink? Yes, I brought it!”

Ben is still running his beard.

A mechanical issue brought James in early during qualifying.

2 out of 3 have raced our nationals in Canada.

I don’t like saying it, but “mean mugging” really sums it up for Cade Clason in this one.

Adam Enticknap and Alex Ray in the pits.

Where do I even start.

Time for a freshie.

Marshall Weltin getting warmed up.

Apparently, this thing has sat here for a while.

If you have to ask…

Justin Barcia has shaved his beard.

Jason Weigant having a chat with RC before he rode the track with a microphone hooked up.

James waiting for the pre-race interviews.

Eli talks with the booth after a heat win.

I had no idea who it was that yelled from the crowd. Turns out it was Ryan Gauld and a group of Canadians.

It was difficult to miss who the title sponsor was at this one. See you next year, gang. Thanks for reading and we’ll see you all at our home race this weekend in Toronto! 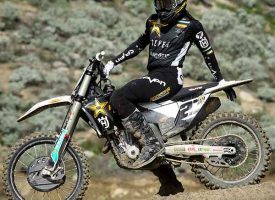