May 02, 2016 Faces at the Races, Features, Photo Reports Bigwave

I had a lot of fun posting ‘Faces’ last week, so I wanted to get to it right away this week after round 16 of the Monster Energy AMA Supercross Series in East Rutherford, New Jersey. Driving the distances we do to get to these great events can get tiresome, but then the racing starts and you get to see something special happen every time. Sometimes you have no idea what that ‘special moment’ will be at all and other times you do.

#1 Red Bull Fox KTM rider Ryan Dungey only had to finish 14th or better to clinch his 2nd straight 450 SX title. He’d been on the podium 31 times straight heading to NYC, so we knew going in what the headline was probably going to be. Here’s a closer look at the people who keep us all coming back for more, no matter how far the drive is. As always, these captions are all written in good fun.

RaceDay LIVE’s Jim Holley is always busy during track walk getting the interviews, like this one with #23 Aaron Plessinger.

There are two people whose stern looks actually kind of frighten me…and I was able to capture both of them in this one shot. Hey, Mike LaRocco and RJ Hampshire, lighten up, you’re at the dirt bike races!

The weather Saturday was about 15 degrees but it got hot inside the stadium out of the wind. Unfortunately, it cooled right off in the evening and I was trapped wearing shorts!

It won’t be long now until we see Mike Alessi back racing in Canada!

There were quite a few MX Superstars back in the 1980’s and Jeff Ward was 3 of them!

I’m still not sure about Jason Anderson’s hat, but HE looks happy.

Justin Brayton listening in on the riders’ meeting.

We couldn’t really figure out what Tyler Bowers was doing here. He must have been broadcasting live because he’s way too young to have to hold his phone way out there like some of us…

Tim Ferry is hypnotized by this lustrous facial hair.

Uh oh, it looks like Jake Weimer is predicting a bog in this section. Can’t you just hear it?

Josh Grant was all business here.

Did you know Tanner Ward’s dad’s name is Jeff? Well, it is.

#519 Josh Cartwright, the full-time college kid, gave it the old…college try in Jersey.

Canadian Team PR-MX in the house!

I always wonder if riders do the sections like they map it out during track walk. I know I never did! The quads usually ended up being double double sections…

Cade dislocated his shoulder in that final turn of the LCQ when he got together with Nick Wey. – Bigwave photo

I’m not moving the camera until you look at me, Logan! There.

#424 Vicki Golden didn’t miss the night show by much.

Um, Josh, that guy is trying to talk to you…

From the tunnel during opening ceremonies.

The Pit Party Smoke Show. I breathed in way more of that stuff than is probably healthy.

Doing a brisk business at the turnstyles.

After the smoke show, it looked like a war zone!

Oh well, the crowd loved it!

The Pit Party in full effect.

Trying out a Honda for the first time.

A happy fan getting an autograph.

Is the one on the left also a wig?

Tyler getting a slight adjustment before hitting the track.

Yes, guys, that IS the French Canadian in front of you.

The pits from up in the stadium.

Here’s how it works. Clear as mud…

You’d almost think we staged this one…

I’m not a huge fan of the look of these plastics, but a #1 can make anything look perfect!

Julien helping out a fellow racer who needed a hand with a tire change.

Henry Miller has a ton of talent. Unfortunately, he met the ground a few times this past weekend.

This one can be found in the Sears catalog. He should really be pointing off into the distance though.

Logan getting into the zone in the PR-MX pit.

Alex found just the right tint for the sidelines.

Pointing out the action to mom.

Josh is getting a lot of ‘air time’ here!

MXPTV’s Matt Wozney took some time away from the Pro Bowling Association to cheer on his brother #760 Tyler Wozney.

Donk and Vicki during practice.

Looking for inspiration from high places.

It was an enthusiastic homecoming for #88 Ronnie Stewart.

Lurch having a chat with Chad Reed during opening ceremonies.

“Hey, what’s he doing over there?”

Time for some new brace graphics for Marvin.

Getting the Scott Goggles just right.

Aaron and Cade yukking it up before the night show.

The only guy named Vann you know who wasn’t in a college drinking movie. .

#201 Cedric Soubeyras having some fun before the racing starts.

Not as impressive when it’s still light out.

At least it cleared out quickly.

#83 Daniel Herrlein getting set for the night show.

Cole Seely waiting for his intro.

The podium was right in front of the start straight so we could wander over and shoot the 450 guys waiting on the line.

Justin Bogle visualizing a holeshot. It works because he’s near the front almost every time!

Yep, you should be smiling, Trey Canard! That really could have been a lot worse.

They listed Benny Bloss as being 6’5″. That’s a pretty tall motocrosser!

I actually missed Malcolm Stewart’s victory dance. Here he is just after it was done, calling Mike LaRocco over.

Ready to hand over clean 100% goggles for the podium shots.

I always enjoy Jeremy Martin’s facial expressions on the stage.

Someone tell Malcolm he won!

Malcolm and Big James have a ‘private’ moment after the podium.

You just never know who’s going to get the champagne shower at these things.

Dakota heads to the pits with his holeshot cheque.

The celebrations were emotional at the end of this night.

This photo doesn’t really sum up how cool it was when Ryan’s wife finally made it onto the track and jumped into his arms.

Somone else is smiling just because he IS Ken Roczen.

I kinda liked all of these…

A hug from The Man is saved for the rare few. This isn’t a man hug, it’s THE man hug.

I even heard them say, “OK, stare into Cudby’s camera” and I still stood way over here. Oh well, I’m glad I could be there to witness another championship. Thanks for playing along. See you at the races… 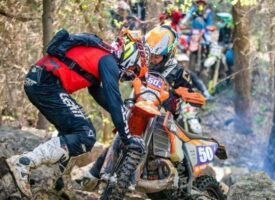 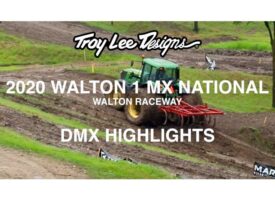